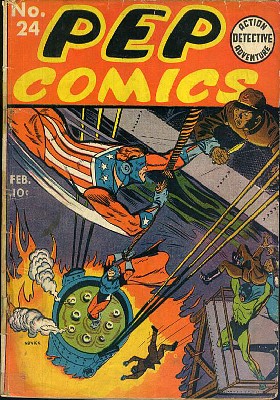 Back in the era of the ten-cent anthology comic book, publishers loaded their books with a variety of features in the hopes that any first-time readers would continue to buy one of their titles regularly to keep up with a certain strip. Usually, it was one or two strips – one of them the cover feature – that made some readers come back for more. But occasionally, there could be three or four of the book’s features – which averaged around 8-10 per book – that would entice a reader to continue to buy a title. But it was rare to have a title that in which most if not all of the strips in the book made a reader want to continue buying the title. Fortunately, those exceptions to that rule managed to occur.

One of those exceptions was MLJ’s Pep Comics. By the time Pep Comics #24 (cover-dated Feburary, 1942) hit the stands in December of 1941, it was a title that had a strip lineup that was so strong that it was more than able to make more than a few readers want to read the whole book from cover to cover. Not only did Pep feature two of the top superheroes of comics Golden Age; the Shield and the Hangman; it also had a strong lineup of backup features that included a strip that was rapidly becoming one of the top humor strips of the day, Archie. But how good was the book and features within it you ask? Well once we get past a cool Irv Novick cover, we’ll see:

THE SHIELD; The book gets off to a flying start as the Shield and Dusty investigate a series of murders involving a “suicide club”. The writer/artist team of Harry Shorten and Irv Novick deliver on this mystery inspired by the “Suicide Club” stories of Robert Lewis Stevenson which also incidentally inspired the 1936 film Trouble for Two (Metro-Goldwyn-Mayer).

THE HANGMAN; To keep up the momentum generated by the Shield story that kicks off the book, the Hangman has his first of two encounters with the Walrus as the Walrus manages a hostile takeover of a crime organization. Considering that the Walrus came out around the same time that another villain who took his name from a creature that prefers cold climates – the Penguin who appeared in Detective Comics #58 (December 1941) – made his first appearance. It comes off as just another one of those coincidences. Harry P. Lucey delivers on the artwork on this story.

DANNY IN WONDERLAND; In a story that borrows from a chapter in Jonathan Swift’s Gulliver’s Travels (not to mention the Fleischer brothers’ 1939 adaption), Danny and Kupkake find themselves in the middle of a war between two races called the Boogeys and the Woogeys.

SERGEANT BOYLE; In another one of those great tongue-in-cheek adventures from Carl Hubbell, Boyle and Twerp find themselves trying to wreck a railroad construction project in the Sahara Desert by the Nazis.

JOLLY ROGER AND HIS SKY PIRATES; It seems that when a pretty nurse comes along, Jolly Roger and his crew try to get themselves injured to get her to notice them. But they are forced to get healthy right away to smash a Nazi bombing mission. The team of Joe Blair and Ed Smalle deliver the goods on a strip that combined what they were doing on such strips as Wings Johnson with the newly emerging Blackhawk strip.

ARCHIE; In his third appearance in comics overall (his first two appearances were in Pep #s 22 & 23), Archie tries to get a position on the Riverdale High basketball team. But first, he has to pass a history exam. Another very funny story from Bob Montana. This story introduced the character of Coach Kleats (who wouldn’t be named until Archie #94).

KAYO WARD; When the plane he was flying on crash lands in a South American jungle, Kayo Ward is forced into a boxing match against a few natives. A so-so story in my opinion.

BENTLEY OF SCOTLAND YARD; In a story that borrowed its plot from Sir Arthur Conan Doyle’s classic novel The Hound of the Baskervilles, Inspector Bentley investigates a murder involving a phantom hound. Featuring the artwork of Paul Reinmann.

All in all, this issue of Pep Comics proved that it was one of those exceptional titles in which most if not all of the book’s strips were of high enough quality that ensured that the book was a good enough read to keep readers of that period coming back for more. But then again, how good a book depends on the reader. But considering that I happen to be a fan of most of the strips in Pep, I can easily be blamed for being biased somewhat towards the quality of the strips in this title. But I’m not alone.