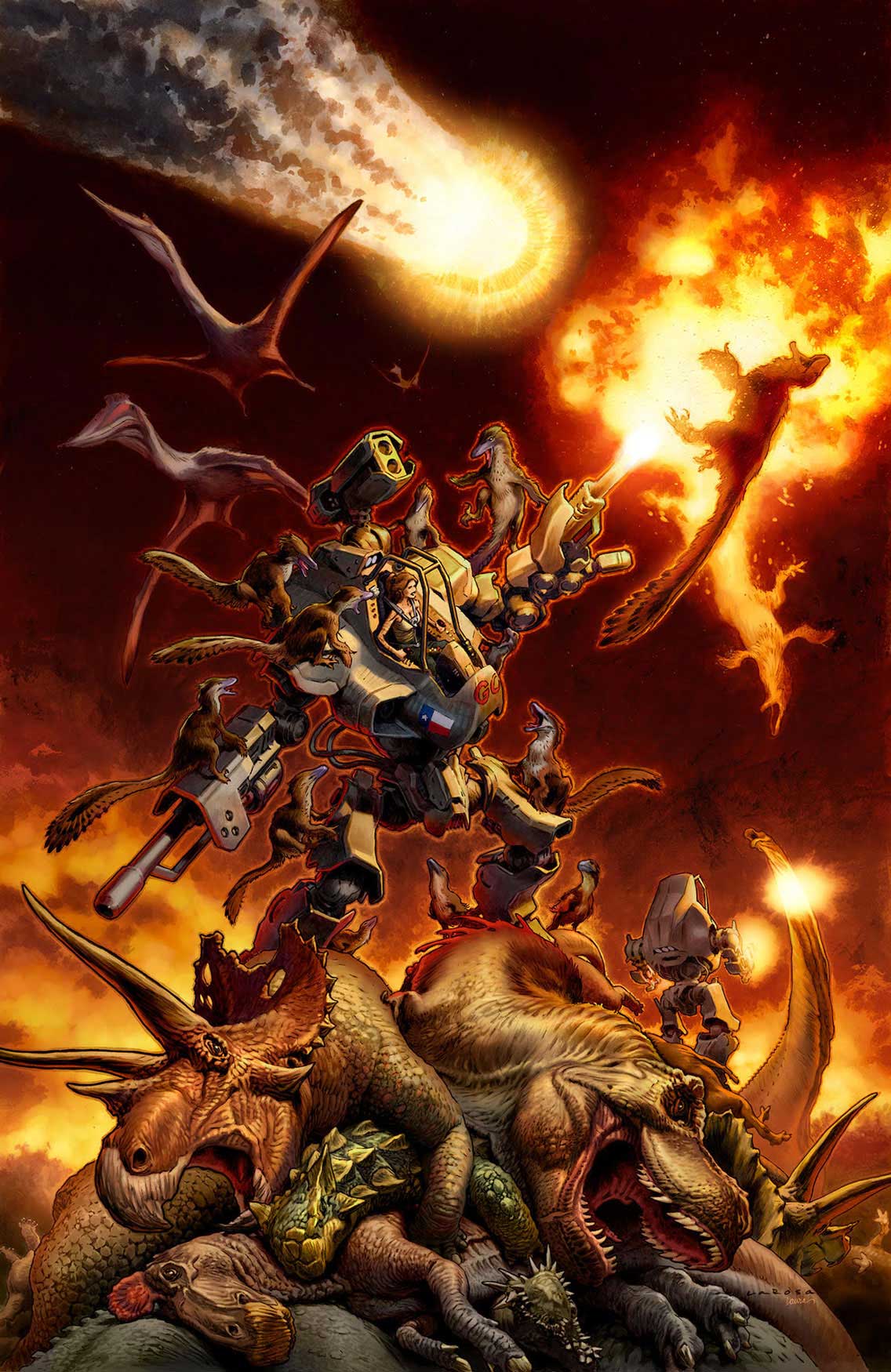 How do you top top-ness? How do you re-conquer conquering? How do you follow up the most hotly anticipated debut in all of comics* history?

And you say to the man all men are eventually judged against, “Jurassic times call for Jurassic measures, Rob. Can you meet the challenge?”

With a flick of his locks and a twinkle in his smile, the Silver Fox answers the only way he knows how, “You bet Jur-ass-i-can.”

Ladies and gentlemen, from the deeply unsettling and sugar-dependent imaginations of New York Times best-selling writer Robert Venditti (Justice League), blockbuster artist Juan Jose Ryp (Wolverine), and colorist supreme, Andrew Dalhouse (Batman) comes TANKERS! The only comic brave enough to admit that the biggest injustice of the dinosaurs’ extinction is that mankind didn’t get to kill them all ourselves. Guaranteed to melt your face, eyes, and prefrontal cortex when Bad Idea unloads THREE DOUBLE-SIZED ISSUES of dinosaur-battling intensity shipping bi-monthly into select comic shops worldwide beginning in April 2021!

Featuring an all-new cover by artistic T-Rex Lewis LaRosa (Punisher MAX), practically bursting out of its comic book-sized muscle tee with more than 40 pages of content (including a top-secret, standalone bonus B-Side story we can’t even talk about yet) and currently allocation free!

But that’s not all, in less than one month, the runaway train of comics anticipation that is BAD IDEA officially arrives with ENIAC #1 by New York Times best-selling writer Matt Kindt (Mind MGMT) and incendiary artist Doug Braithwaite (Justice) on March 3rd.

And in the wake of ENIAC and TANKERS steamrolling debuts, Bad Idea will be delivering even more right hooks throughout the spring and summer:

Wanna get in while the gettin’s good with Bad Idea?  You simply have to visit a Bad Idea “Destination Store” — one of the 200 and counting comic shops around the world that have signed on to join our independent network of direct-distribution retail partners — to pick them up on a Wednesday. (Or pre-order in advance to make sure you secure your copy.)

We’ve made it even easier, too. To locate a Bad Idea retailer near you and then pre-order ENIAC #1 and every other Bad Idea title, simply click here and fill out the little form.