GIANT DAYS Brings The Holiday Cheer With An All New Special 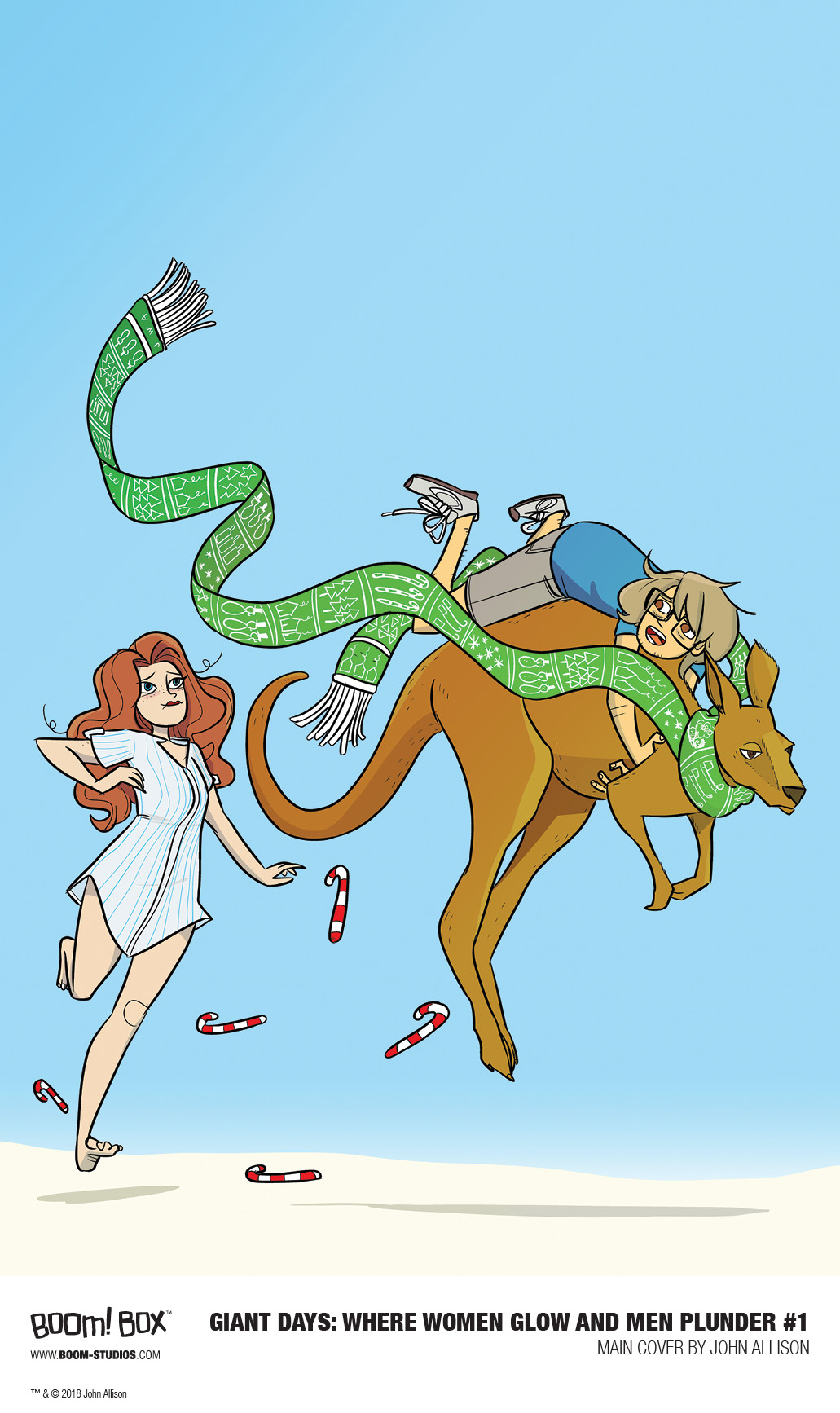 LOS ANGELES, CA (September 12, 2018) –  BOOM! Studios today announced GIANT DAYS: WHERE WOMEN GLOW AND MEN PLUNDER #1, an all-new oversized special from creator John Allison celebrating the holidays in December 2018. You see, Ed Gemmell has a girlfriend and with Christmas looming, it’s time to meet her family—in Australia. Which is fine. Who cares that they’re all Manly Men! Ed once…did something manly. That one time. It happened. It’s going to be fine.

Launched in 2015 under BOOM! Studios’ YA-focused BOOM! Box imprint, Giant Days was originally solicited as a limited series chronicling the college adventures of Susan, Esther, and Daisy, but strong sales and critical acclaim propelled it to become an ongoing series that has earned numerous Eisner and Harvey award nominations. While the original webcomic from 2011 was both written and illustrated by Allison, Giant Days has featured the art of acclaimed artists including Lissa Treiman, Max Sarin, Liz Fleming, Julia Madrigal, Jenn St-Onge and more. The world of Giant Days has expanded to include young adult novels at Abrams Books and two previous critically-acclaimed holiday specials. This holiday special marks the first time that John Allison has both written and illustrated a full-length issue of Giant Days at BOOM! Studios.

“When BOOM! Studios asked me for a holiday special this year, I knew I would have to dig deep. And if you dig deep, and keep digging, and pop out on the other side of the world, you end up in Australia. Which is where this year’s special is set. Expect sun, surf, spiders and snags,” said John Allison. “I grew up with Australian soap operas like Home & Away and A Country Practice, and have always loved their comedy and music. This may not have qualified me to accurately depict their country, but it hasn’t stopped me trying. I often tell anyone who listens that I would be a great showrunner on an Australian soap. So, finally, all those gold-plated ideas have a home.

“Getting to draw a double-sized issue of Giant Days myself has been the icing on the cake. I could put as many cars, trucks and vans in the script as I wanted without feeling guilty. Like a hangover, the fun comes first. The pain comes later.”

“Each year, the Giant Days team finds a freakin’ hilarious new way to celebrate the holidays and this will be one of the most memorable ones yet for our sweet lad Ed Gemmel,” said Shannon Watters, Senior Editor, BOOM! Studios. “This has been an incredible year for Giant Days, as we closed in on the four year anniversary of the comic book series, celebrated another Eisner Award nomination, and saw the girls take the leap into YA novel from Abrams.”

Print copies of GIANT DAYS: WHERE WOMEN GLOW AND MEN PLUNDER #1 will be available for sale in December 2018 at local comic book shops (use comicshoplocator.com to find the nearest one) and at the BOOM! Studios webstore. Digital copies can be purchased from content providers, including comiXology, iBooks, Google Play, and the BOOM! Studios app.