Celebrate this 20 year anniversary of Tarot with this special
“Jumping on Issue” that will be filled with extra pin-ups , art, photos and surprises!

$40 Special will include Covers A (shown above) & B ,a Bewitching Deluxe Art Print of Tarot ,
the Photocover, that started it All! Featuring the creator himself, Jim Balent, as the Skeleton Man and colorist, letterer & production runner, Holly Golightly as Tarot. Photo has been remastered to celebrate 2 decades of this dynamic duo. Also a Bonus Mystery Gift and JUST for This Bundle a brand new Faerie Passport Sticker.

Artprint is included in Bundle

Classic Photocover is Included in Bundle!

Add the Studio Edition on for $15! 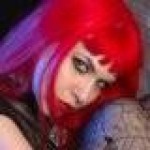