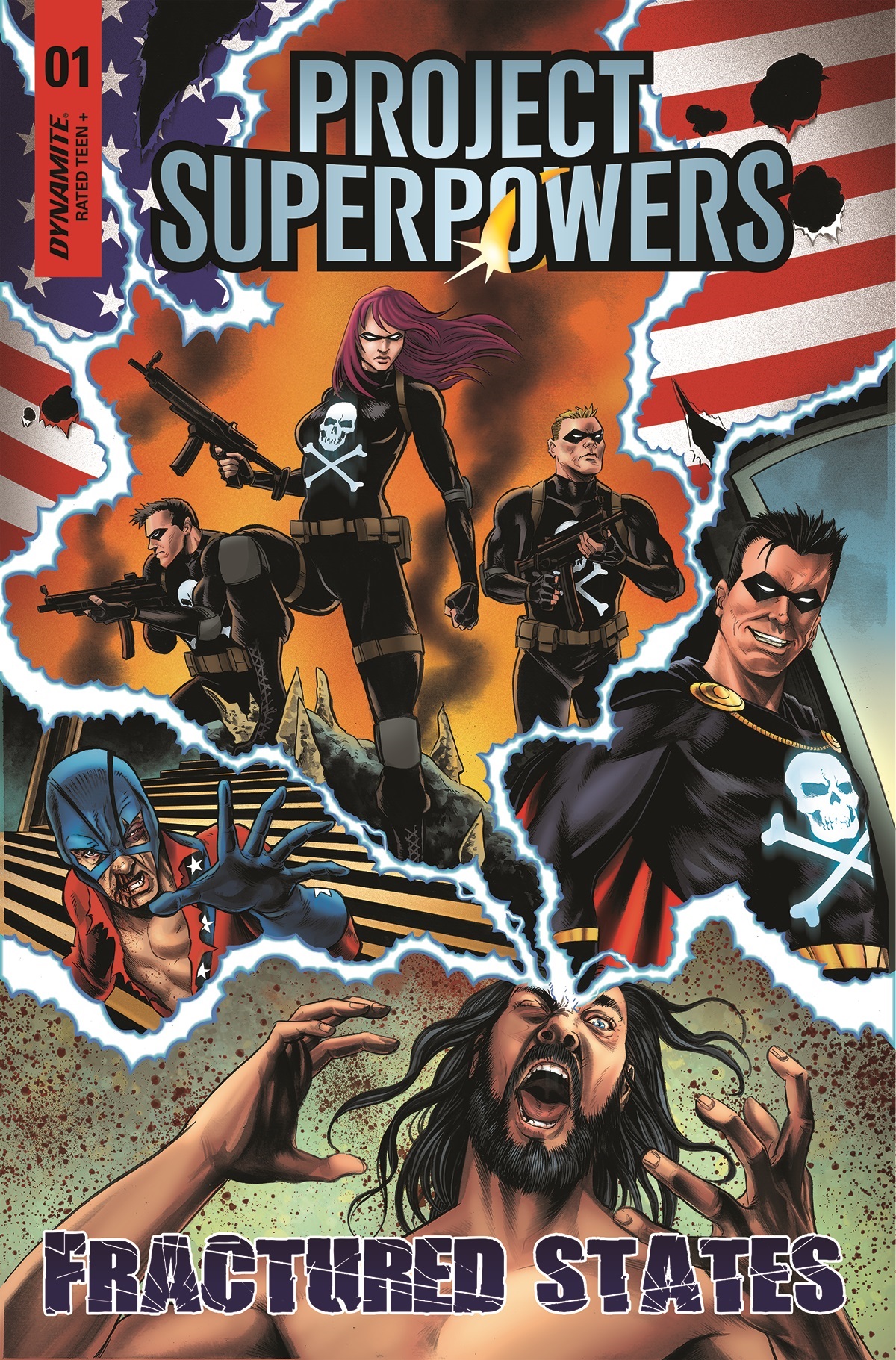 January 20, Mt. Laurel, NJ: The Project Superpowers characters have fought the forces of evil in their original native middle-century, in the present, and now in an exciting new series, in the far-flung future – but how removed is it from today?

Superstar writers Ron Marz (Silver Surfer, Green Lantern) and Andy Lanning (Guardians of the Galaxy) reunite following their fan-favorite cataclysmic crossover at DC, Justice League: Endless Winter, on this new series tackling a fractured future. In Project Superpowers: Fractured States, readers will follow a mysterious John Doe as he awakens in the year 2052. Without memories – or clothes – he will enter a United States ravaged by environmental disaster and fragmented into constantly warring regions led by superheroes, villains, and mega corporations. Can he figure it all out?

“When we were digging into the previous material, we noticed a plethora of patriotic characters,” said writer Ron Marz. “Obviously, that makes complete sense, as many of them date to the 1940s, when America was fighting real-world fascism. That seemed like a viable avenue to explore, since America is dealing with its own fascist impulses right now. It allows us to dig into larger themes like the American dream, and what it means to be American. It’s all presented in the guise of a superhero story, but we wanted to make sure we had underpinnings of some meaty stuff in there.”

Further, patriotic heroes are being hunted down by a mysterious force. And the mantle of Black Terror now being taken up by countless individuals fighting to save the republic. Returning readers of the Project Superpowers saga, and newcomers alike, will be excited to see more exciting takes on their favorite heroes like the Green Lama, The Claw, and many more.

Writer Ron Marz is most known for multiple beloved long runs on titles, shaping their characters and worlds. His most prominent include Silver Surfer, Green Lantern, and Witchblade. Alongside Project Superpowers, Marz’s return to Silver Surfer in 2022 is already being met with fervor from fans. Joining him writing is Andy Lanning, who played a pivotal role in defining the Guardians of the Galaxy, as seen in blockbuster films and video games today.

They’re joined on the series by Argentinian artist Emilio Utrera, colorist Arthur Hesli, and letterer Tom Napolitano. The series is edited by editor Brian Cunningham, formerly of DC and known for hits like Doomsday Clock and countless other blockbusters. On the covers front, artists Mike Rooth, Geraldo Borges, Paula Andrade, Rus Wooten and the legendary Gary Frank contribute their takes on this explosive arc. Subsequent issues will feature covers by Scott Kolins (Flash).

Lanning sums it up, “For anyone who likes a good old-fashioned tale of classic Golden Age heroes cast into a dark dystopian future world where the country has literally fallen apart around them and malevolent forces have risen to take control of the divided states with a main character who’s got amnesia and must undertake a perilous journey across the dangerous, fractured landscape… then this one’s for you!”

“Getting to play in the PSP Universe has been a blast with Ron, Andy and Emilio,” said editor Brian Cunningham. “Since this story is set 15-20 years in the future, it’s always fun telling a ‘what if’ scenario where the readers decide if it sticks. I can’t wait to find out!” 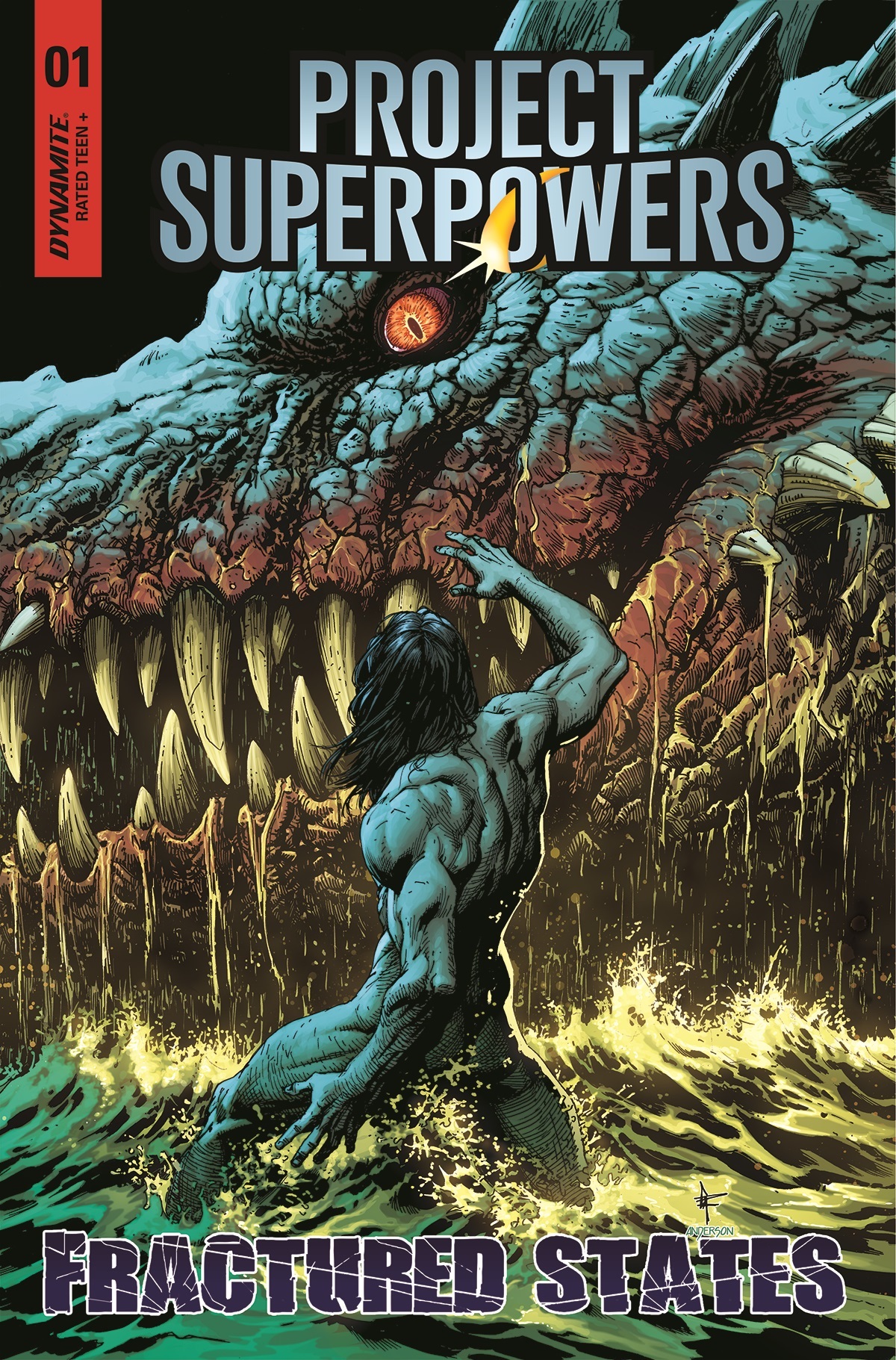 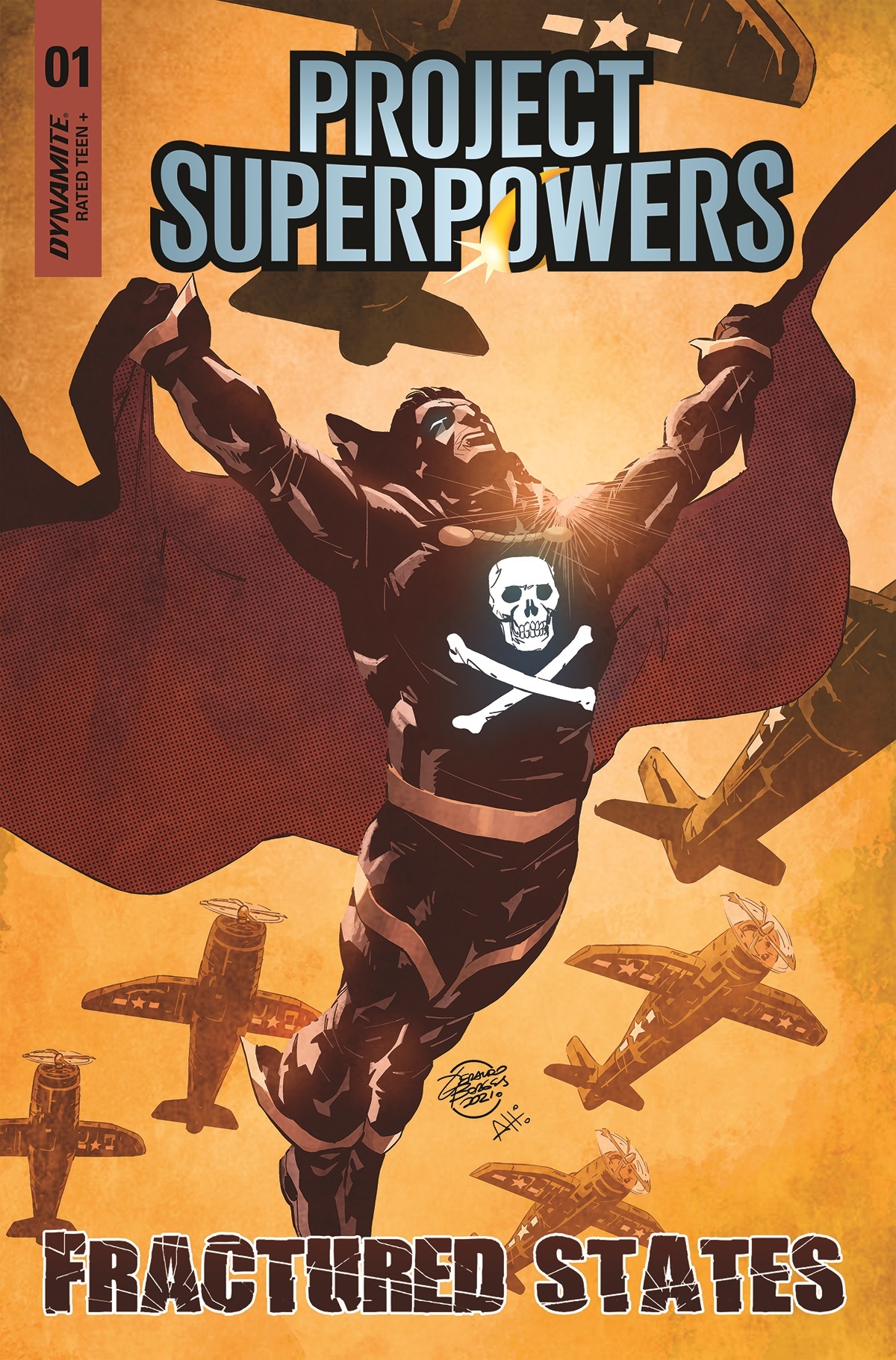 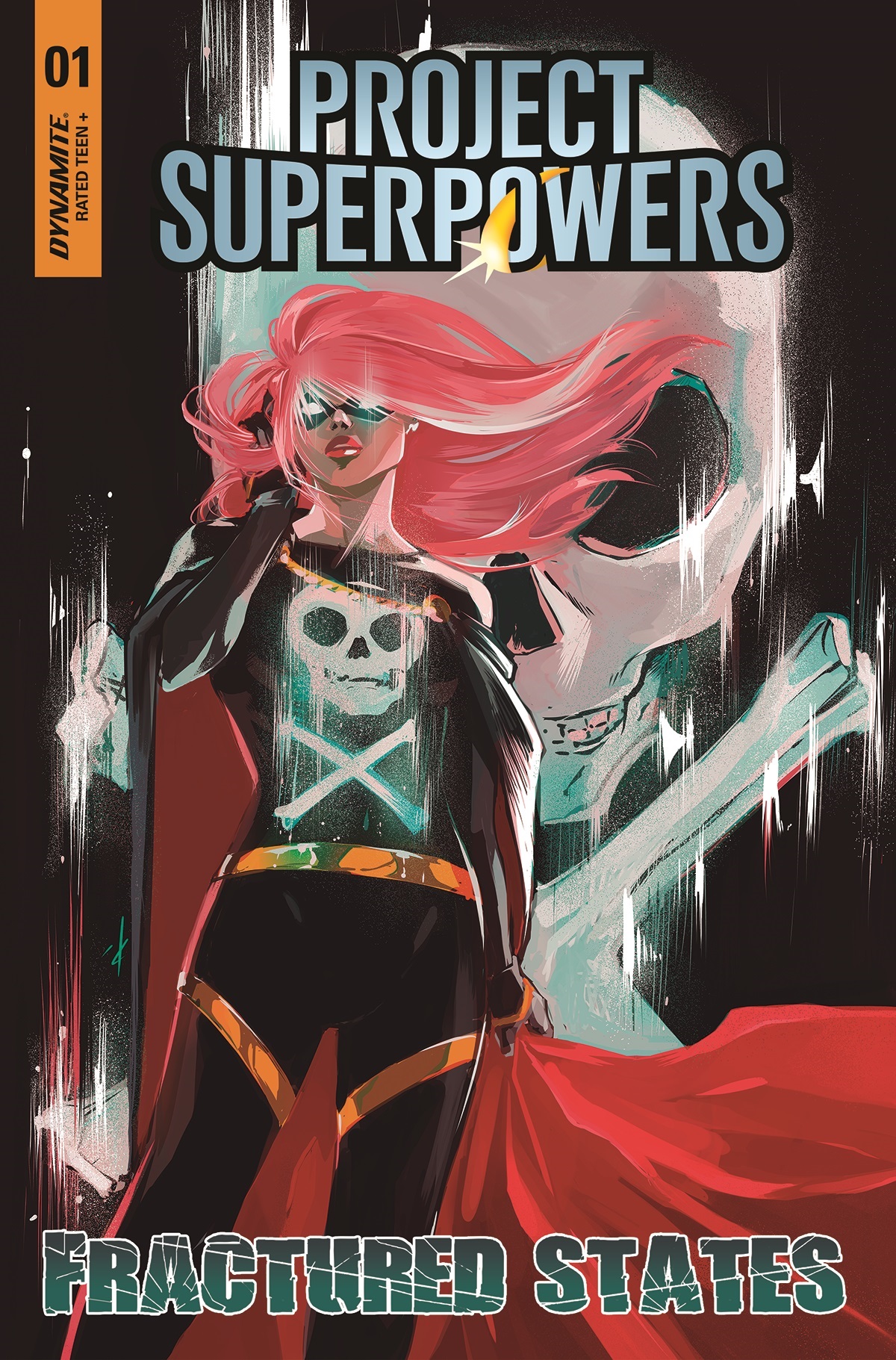 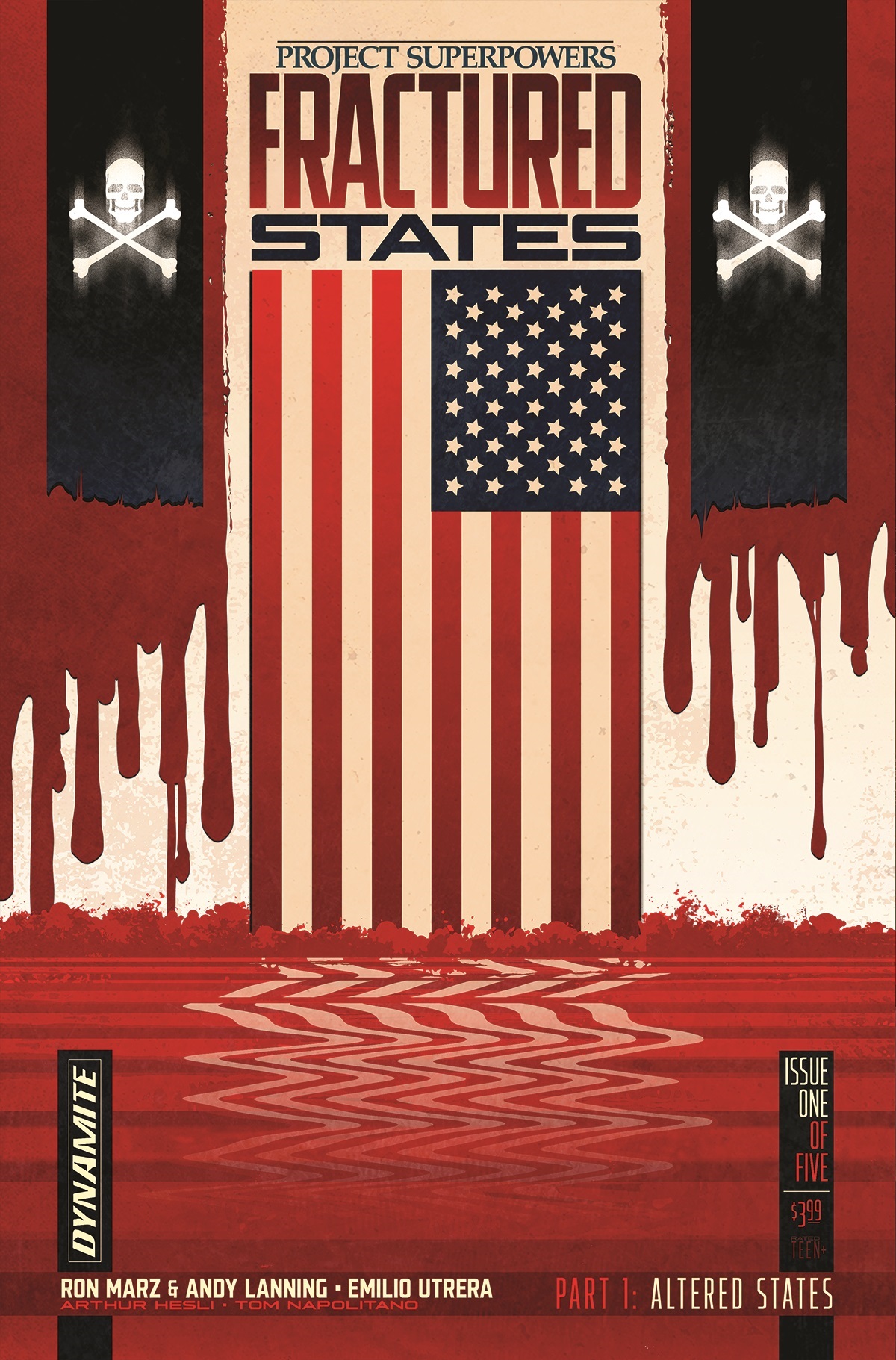 PROJECT SUPERPOWERS: FRACTURED STATES #1 is solicited in Diamond Comic Distributors’ February 2022 Previews catalog, the premier source of merchandise for the comic book specialty market, and slated for release in April 2022. Comic book fans are encouraged to preorder copies of the issue with their local comic book retailers. It will also be available for individual customer purchase through digital platforms courtesy of Comixology, Kindle, iBooks, Google Play, Dynamite Digital, ComicsPlus, and more!