July 22, Mt. Laurel, NJ: As the summer heats up, Elvira, the legendary Mistress of the Dark is busting out with a brand-new comic book tale for her fiendish fans! THE WRATH OF CON is available right now only on Kickstarter! 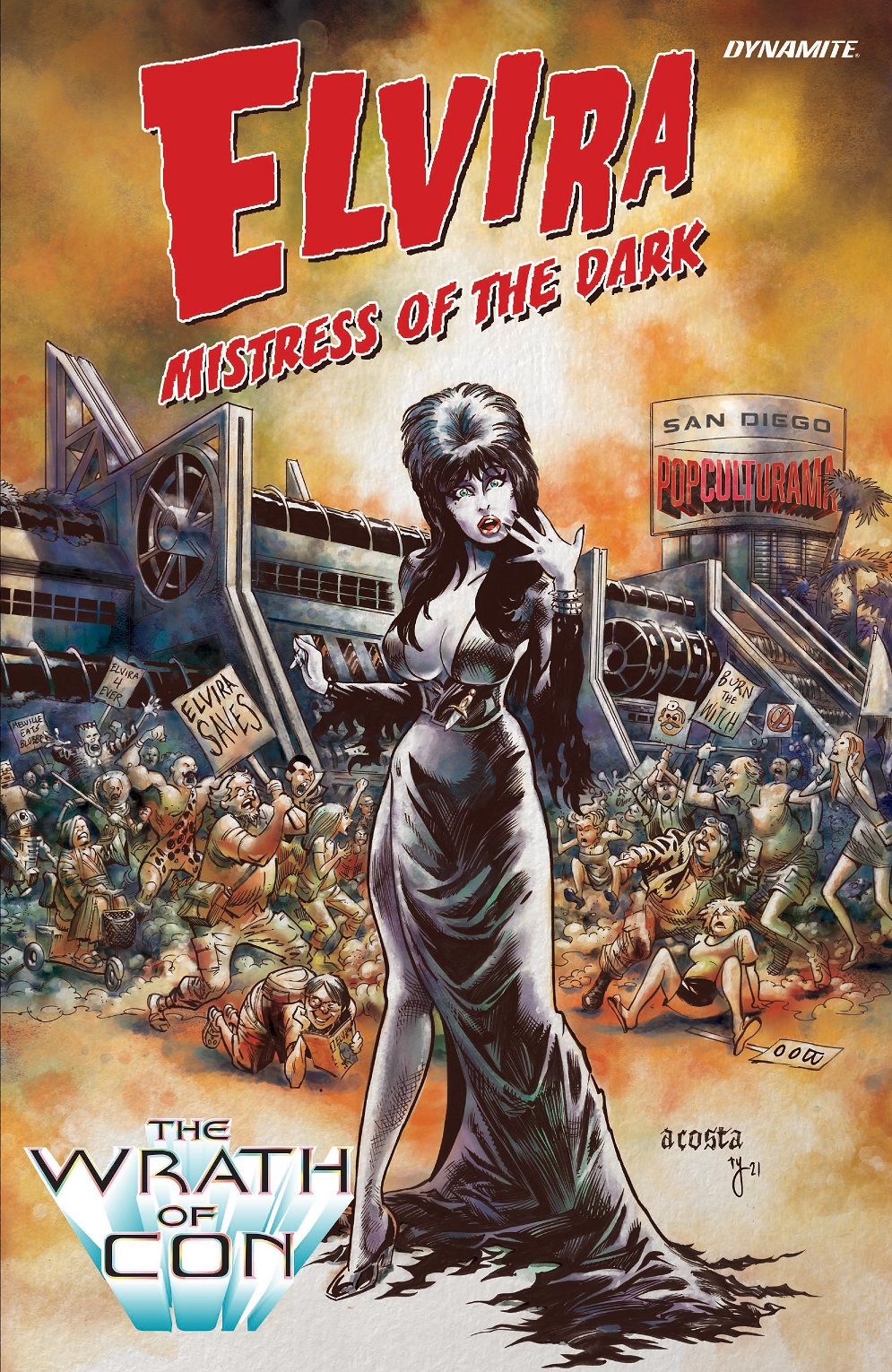 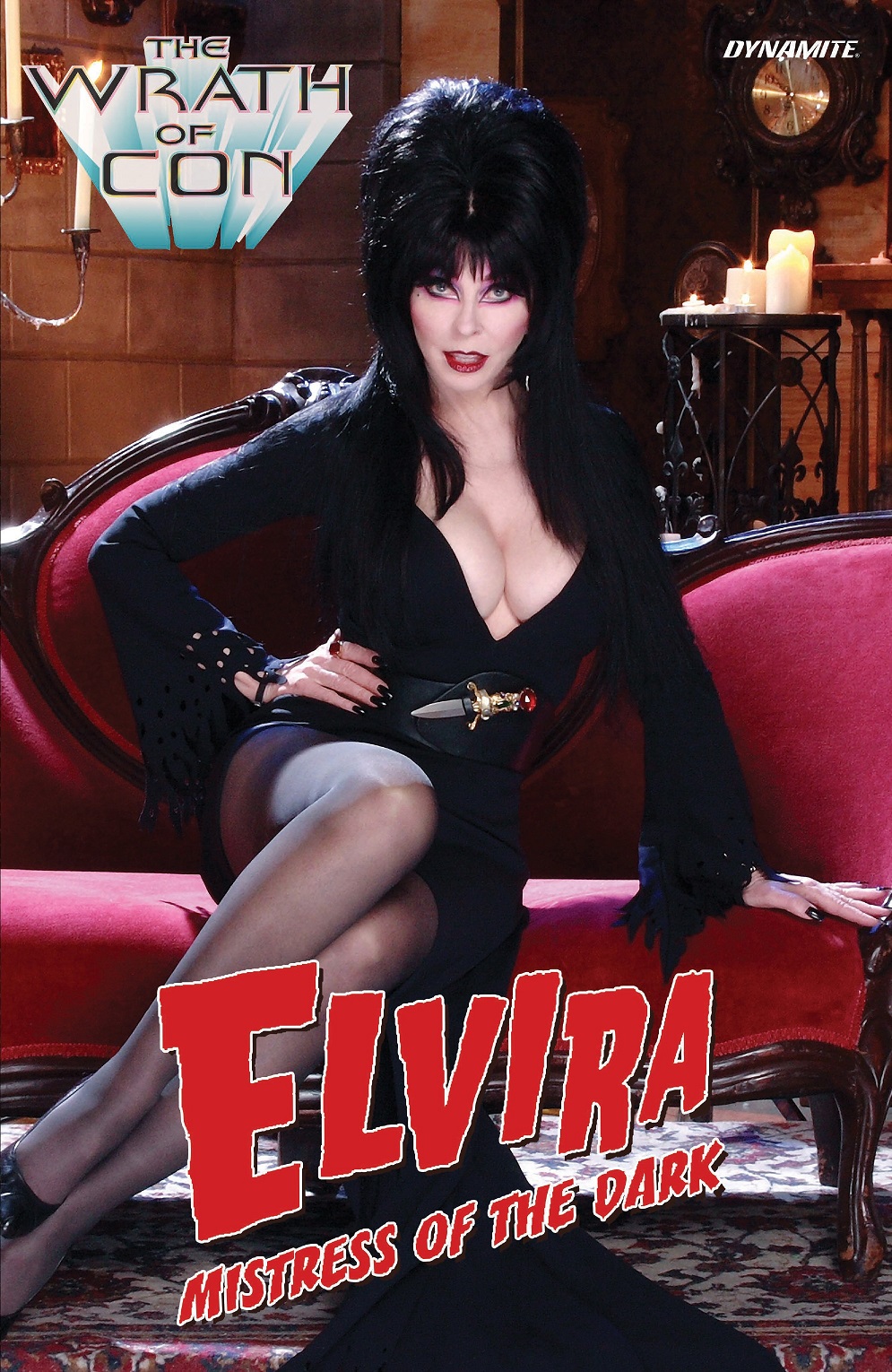 Elvira chimed in, “If you’re like me, and I know you are exactly like me (wink), you’re missing the wonderfully wacky world of San Diego Comic Con this summer. I mean where else can you go dressed like this and feel normal. So since conventions are still DOA, I’m bringing the show to you, my sweeet darlings!”

She has just the treat for everyone! Haven’t you always wanted to go to Comic Con with Elvira? Well, with her “Diabolical Double D” creative partners of writer David Avallone (Bettie Page, Drawing Blood) and artist Dave Acosta (Dragon), she’s whipped up a fun-filled original story to get everyone through this summer sans San Diego!

In her new story, Elvira is the Guest of Horror at the “San Diego Popculturama” convention. The only problem is, an army of angry maniacs want her head on a platter! In a tale featuring cosplay, celebrity, back issue hunting, and… ritual cult murder – THE WRATH OF CON is not to be missed!

“I’ve been a regular at San Diego Comic Con since 1989… (I was, um, five years old, let’s say…) and it’s always a big part of my summer,” said writer David Avallone. “Missing it two years in a row has been a bummer, and this comic felt like a great way to honor the wonderful experience we’re all missing, and poke a little affectionate fun at it as well. San Diego aside, I hope this story will be a delight for anyone who’s ever gone to any convention… even for anyone who’s ever been a devoted fan of anything. Fans make everything we do possible, and I get to wake up every morning and do this dream job — writing comic books — purely from their support and generosity. So this one is for them.”

Artist Dave Acosta added, “We’ve all missed Comic Cons, but now you can get a taste of the madness with none other than ELVIRA as your escort! I’m so happy to team up with David, Walter, Taylor, and of course Cassandra, once again, in a direct sequel to last year’s OMEGA MA’AM. Drawing that project was a dream come true for me, and now, we will deliver the mother of all sequels with WRATH OF CON! ”

The stuffed-full 48 page comic book is presented in a premium format, showcasing the contributions of Elvira, Avallone, Acosta, colorist Walter Pereyra, and letterer Taylor Esposito. Dynamite and the Mistress of the Dark are offering this limited edition release directly to fans on Kickstarter, for an unbeatable price!

Options and extras are abound on the Kickstarter campaign. The book is available with multiple cover variations, from a logo-free “virgin” edition, black & white, a photo of Elvira, or even ultra-rare metal, holo-foil, and even lava foil chase variants! Collectors can get the book signed by Elvira, and or “graded” by CGC Comics to preserve its condition and value. Add-on goodies include a high quality lithograph print, trading cards, collectible coins, and the spooky spectral board!