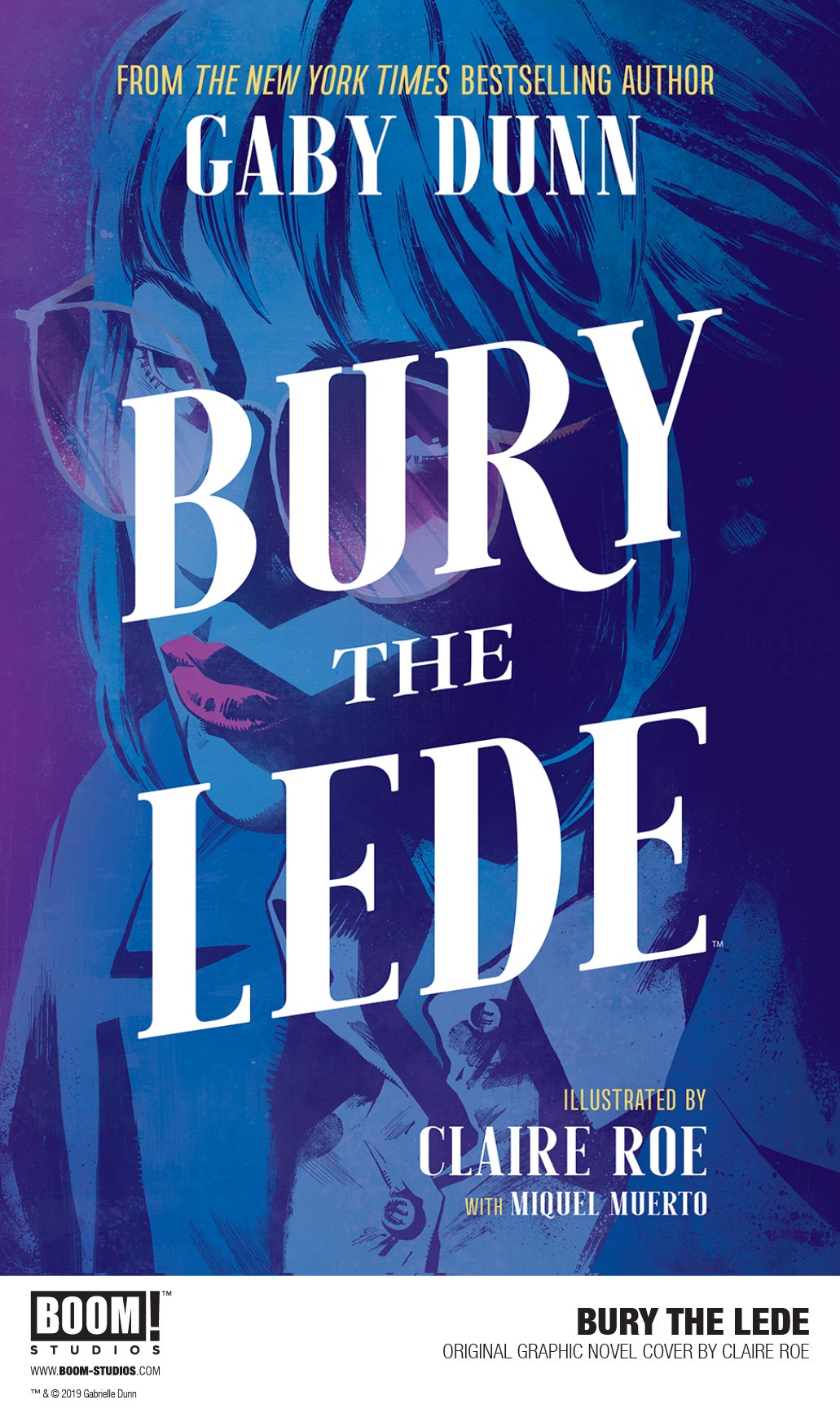 LOS ANGELES, CA (August 27, 2019) – BOOM! Studios today revealed a new look at BURY THE LEDE, a new original graphic novel from New York Times bestselling author Gaby Dunn (Bad with Money, I Hate Everyone But You) and artist Claire Roe (Batgirl and The Birds of Prey), with colors by Miquel Muerto (Strange Skies Over East Berlin), which arrives in stores October 2019.

Inspired by Dunn’s own experiences as a young reporter at The Boston Globe, BURY THE LEDE is a thrilling story about a young reporter’s search for truth leading her down a dark path as she goes toe-to-toe with a potential killer.

Cub reporter Madison Jackson is young, scrappy, and hungry to prove that she deserves her coveted college internship at the premier newspaper in town, The Boston Lede, where she dreams of a career-making headline. So when her police scanner mentions a brutal murder tied to a prominent Boston family, Madison races to the crime scene, looking for the scoop of the century.

What she finds instead is the woman who’ll change her life forever: Dahlia Kennedy, a celebrity socialite covered in blood and the prime suspect in the murder of her husband and child. When Madison is the only person Dahlia will speak to, everything rides on the untested shoulders of this young journalist who sinks ever deeper into the dark, twisted landscape of the city’s hidden circles of crime, corruption, and privilege in order to discover the truth.

BURY THE LEDE is the newest release from BOOM! Studios’ eponymous imprint, home to critically acclaimed original series, including Once & Future by Kieron Gillen and Dan Mora; Something is Killing the Children by James Tynion IV and Werther Dell’Edera; Faithless by Brian Azzarello and Maria Llovet; Abbott by Saladin Ahmed and Sami Kivelä; Bury The Lede by Gaby Dunn and Claire Roe; Klaus by Grant Morrison and Dan Mora; and Folklords by Matt Kindt and Matt Smith. The imprint also publishes popular licensed properties including Joss Whedon’s Firefly from Greg Pak and Dan McDaid; Buffy The Vampire Slayer from Jordie Bellaire and David López; Angel from Bryan Edward Hill and Gleb Melnikov; and Mighty Morphin Power Rangers from Ryan Parrott and Daniele Di Nicuolo.

Print copies of BURY THE LEDE will be available for sale on October 2, 2019 at local comic book shops (use comicshoplocator.com to find the nearest one), and on sale October 8, 2019 at bookstores or at the BOOM! Studios webstore. Digital copies can be purchased from content providers, including comiXology, iBooks, Google Play, and the BOOM! Studios app.

For more on BURY THE LEDE and other projects from BOOM! Studios, stay tuned to www.boom-studios.com and follow @boomstudios on Twitter. 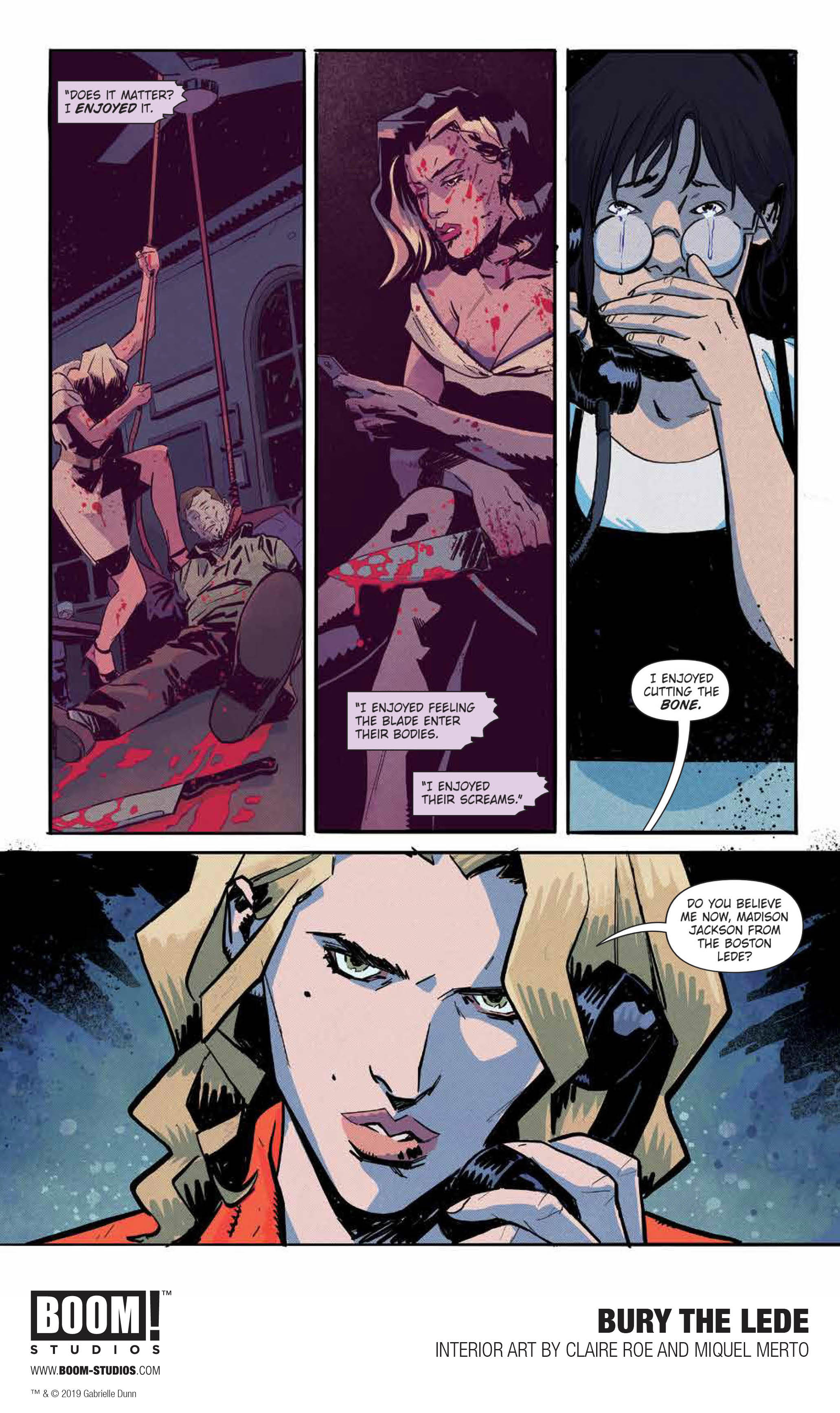 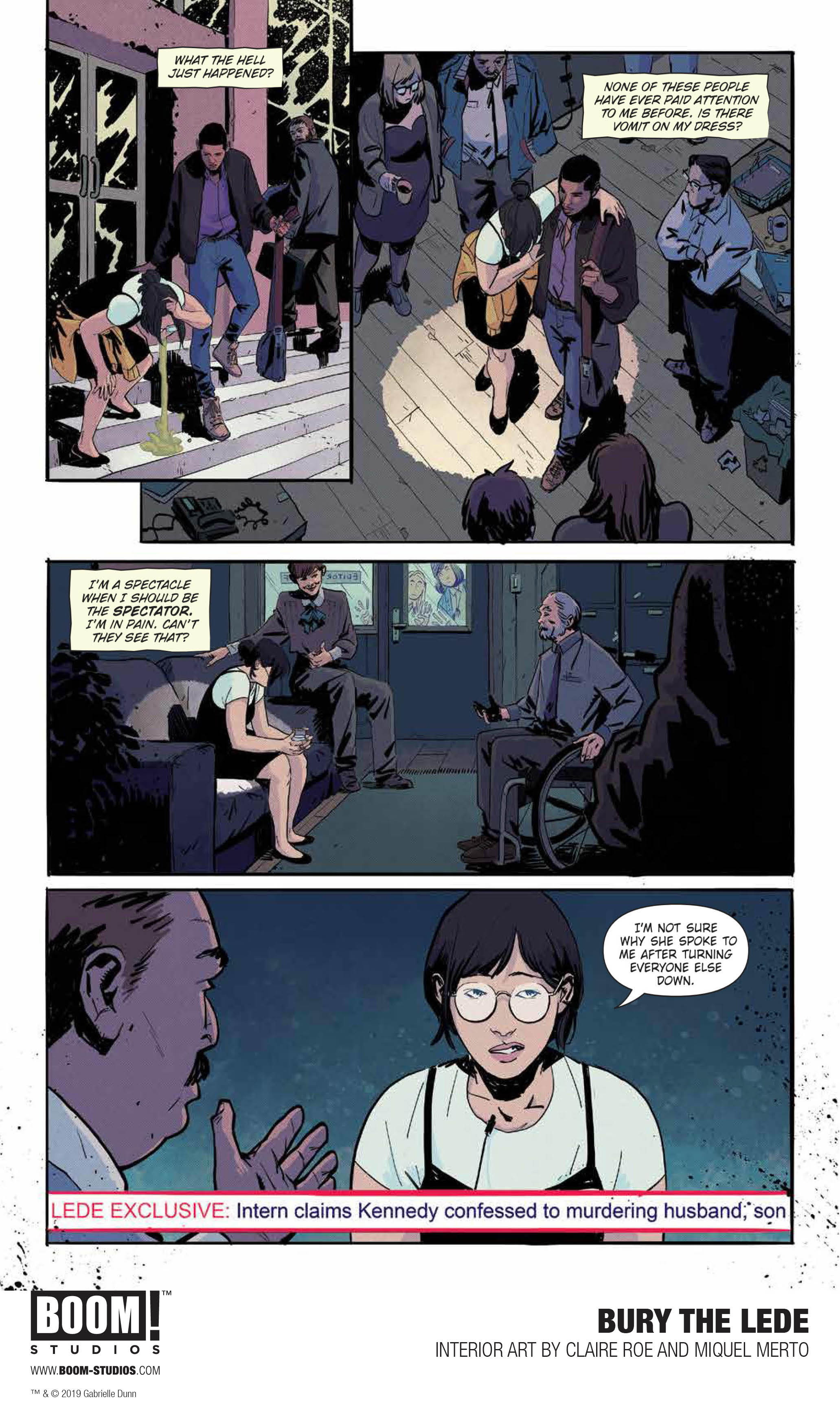 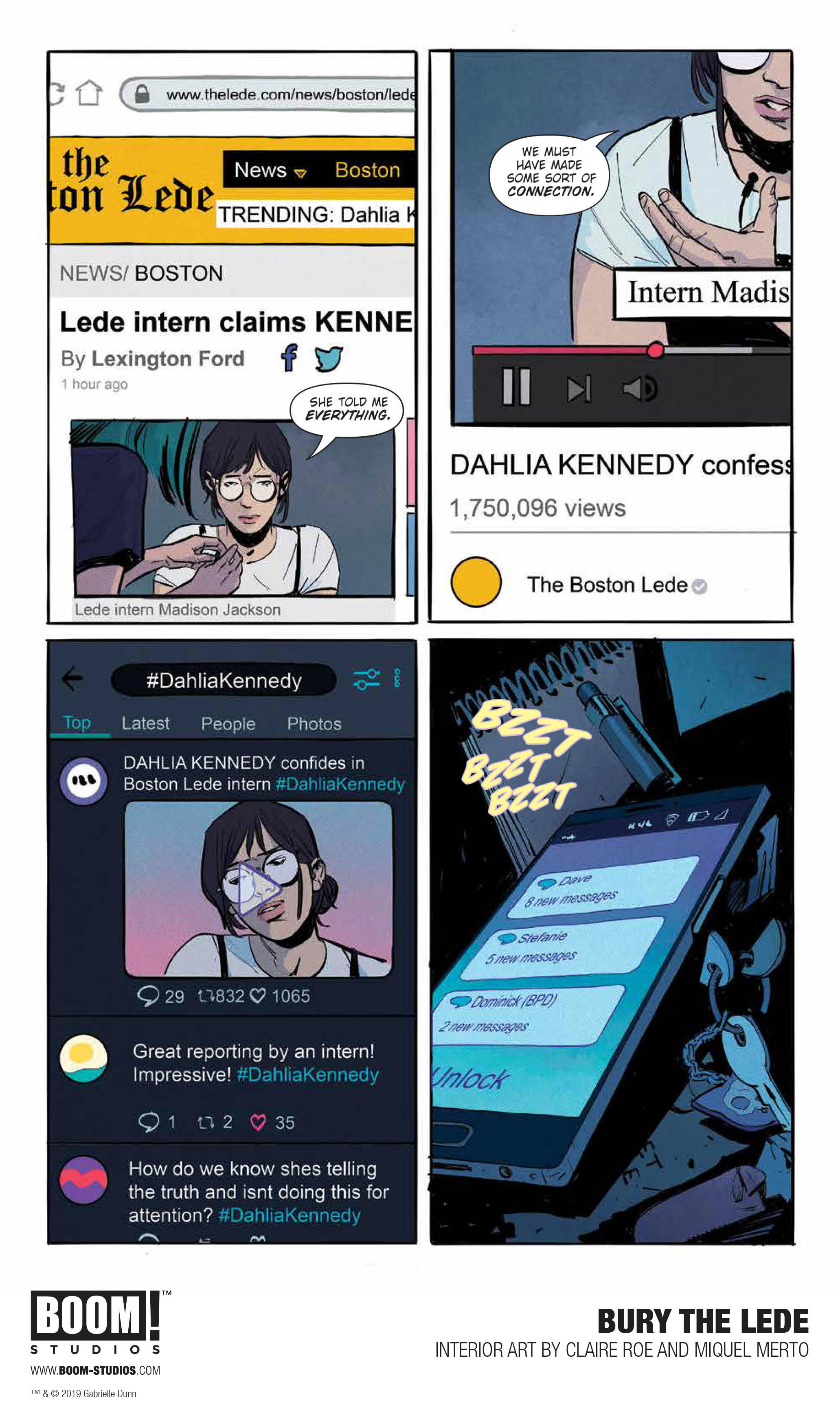 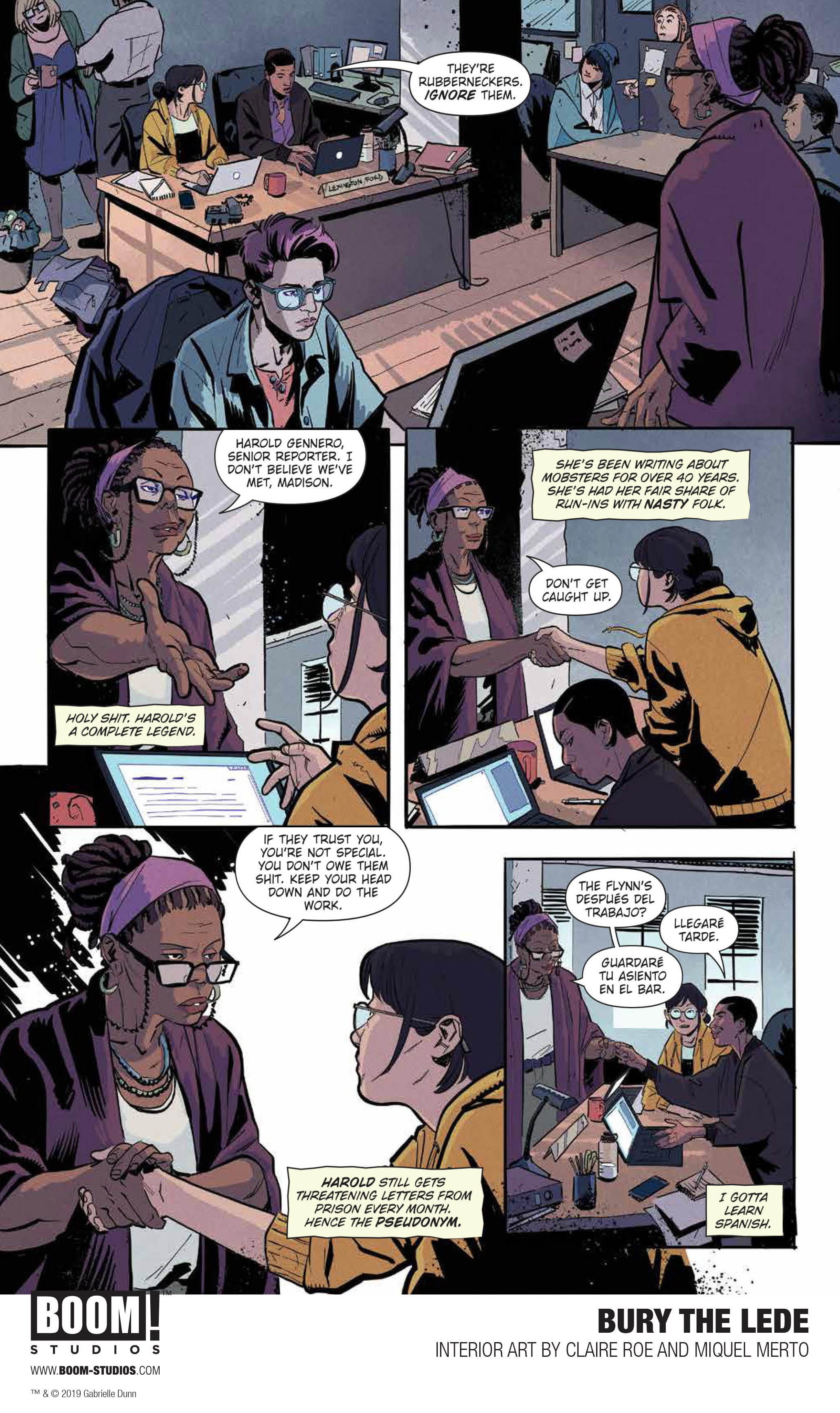 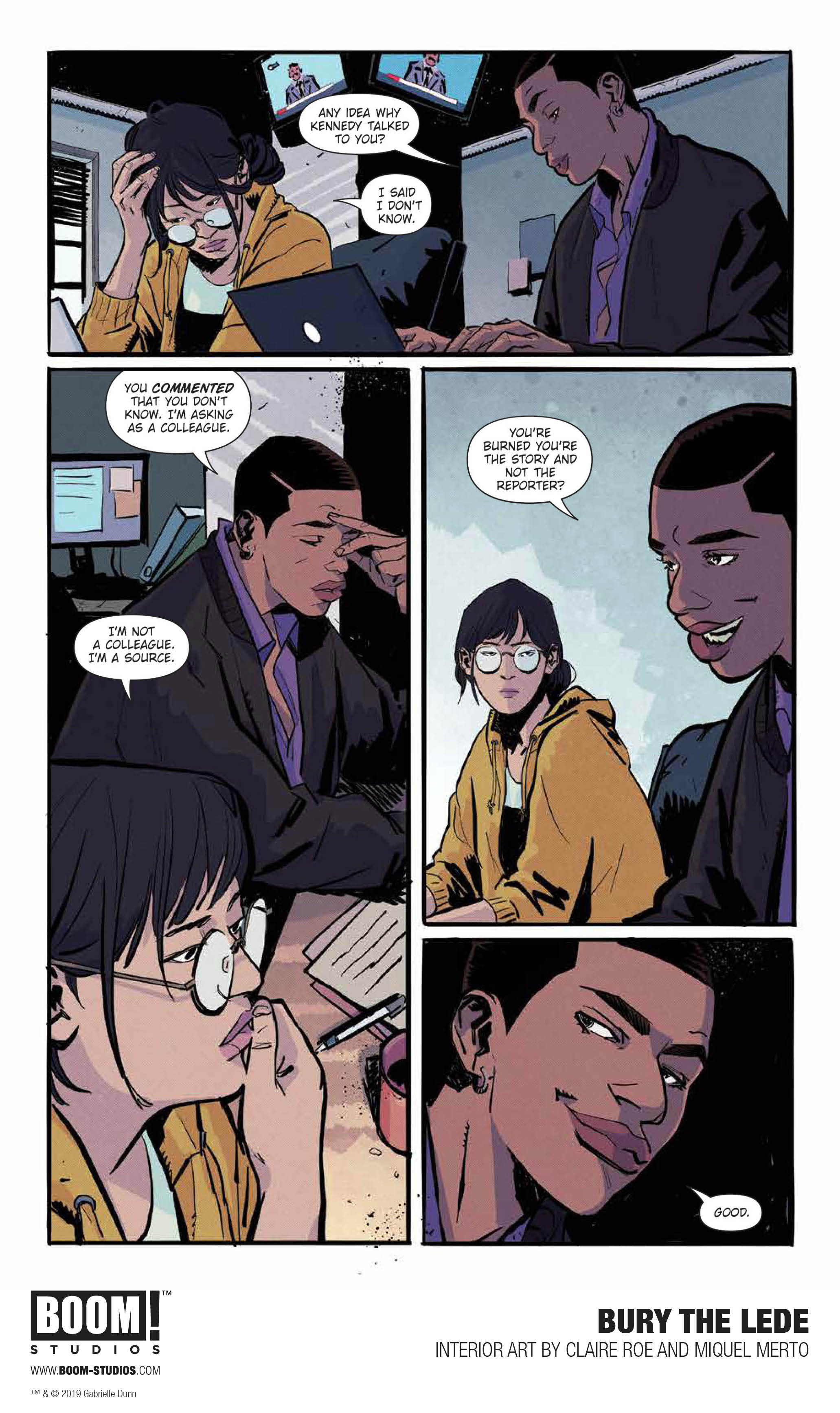 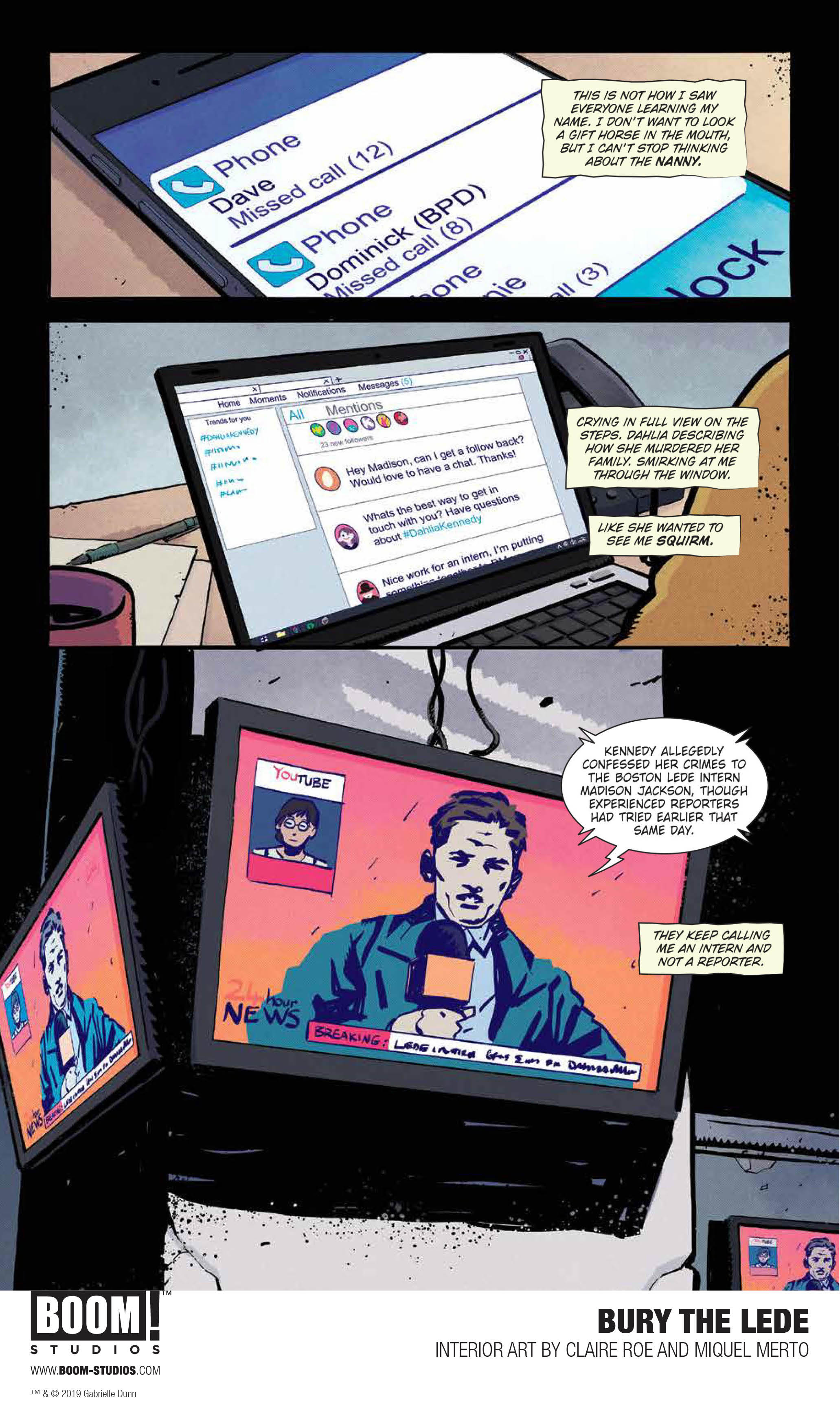 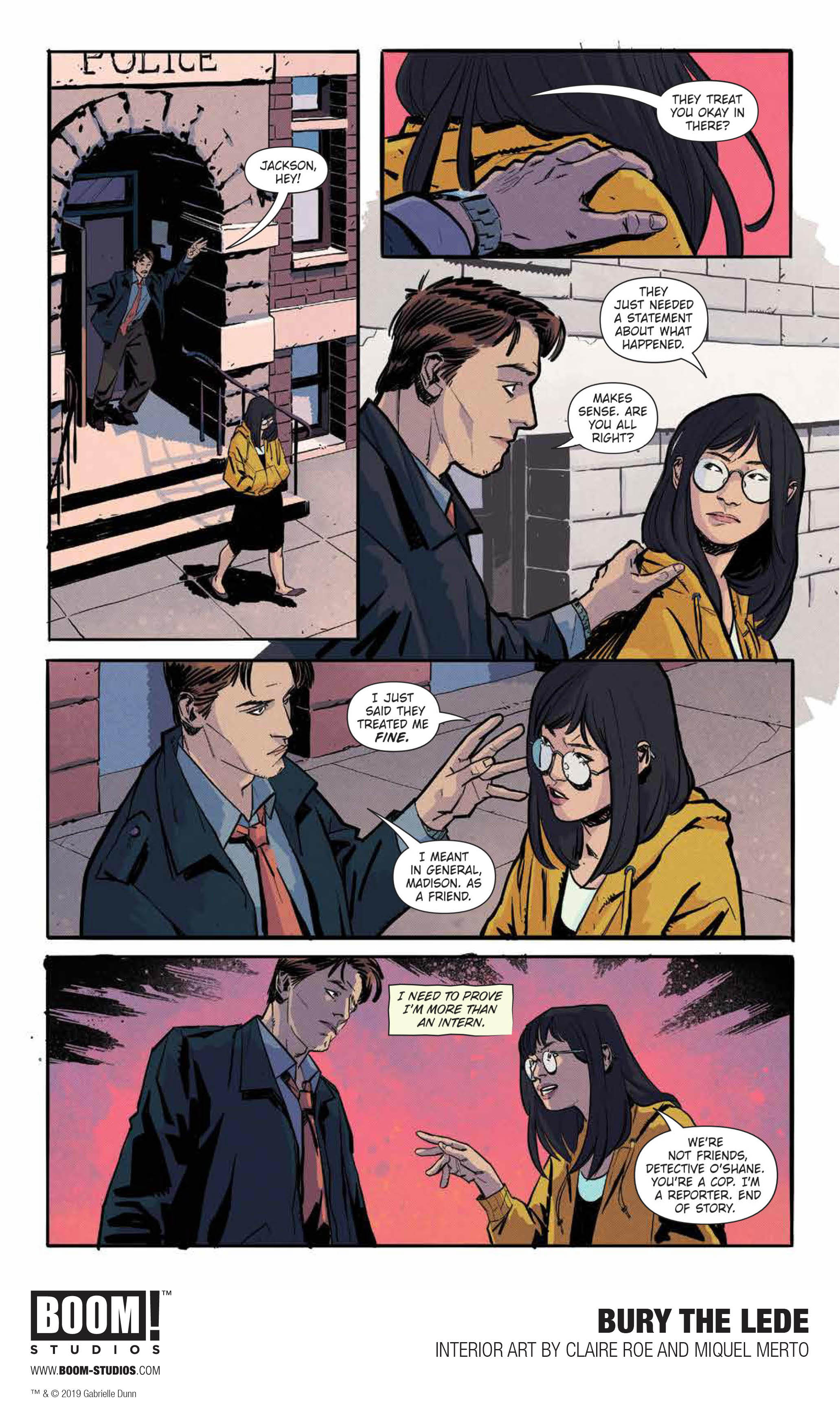 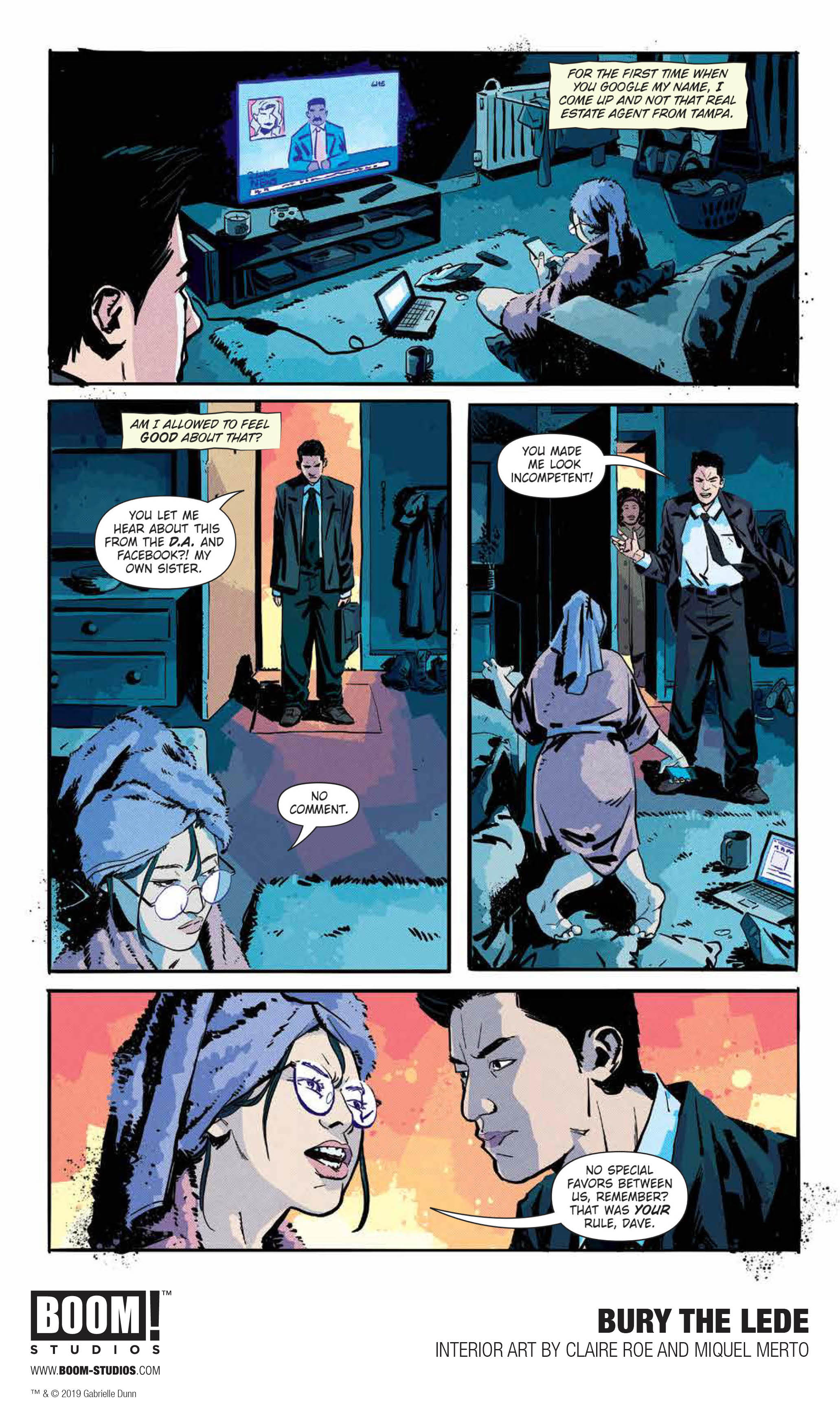 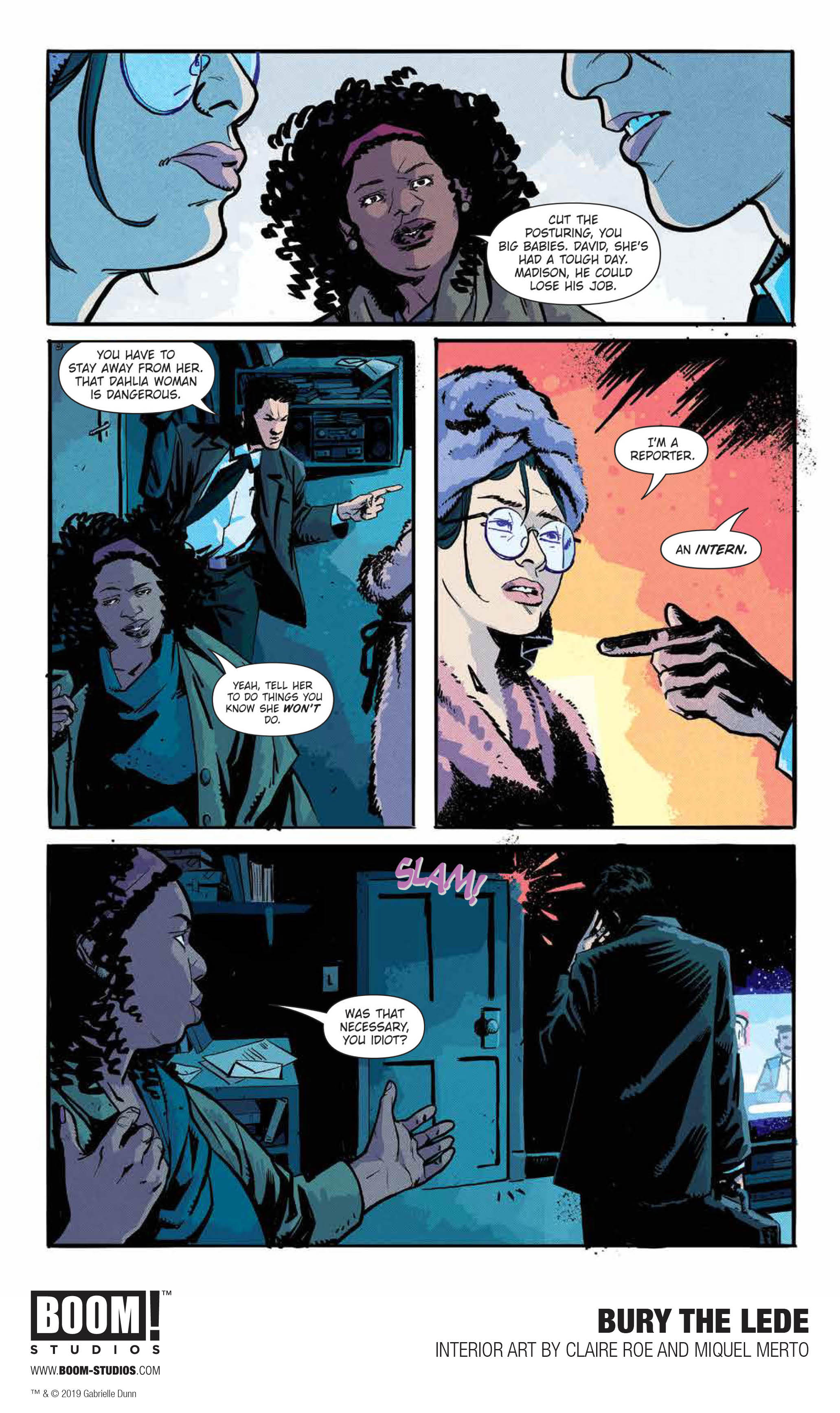 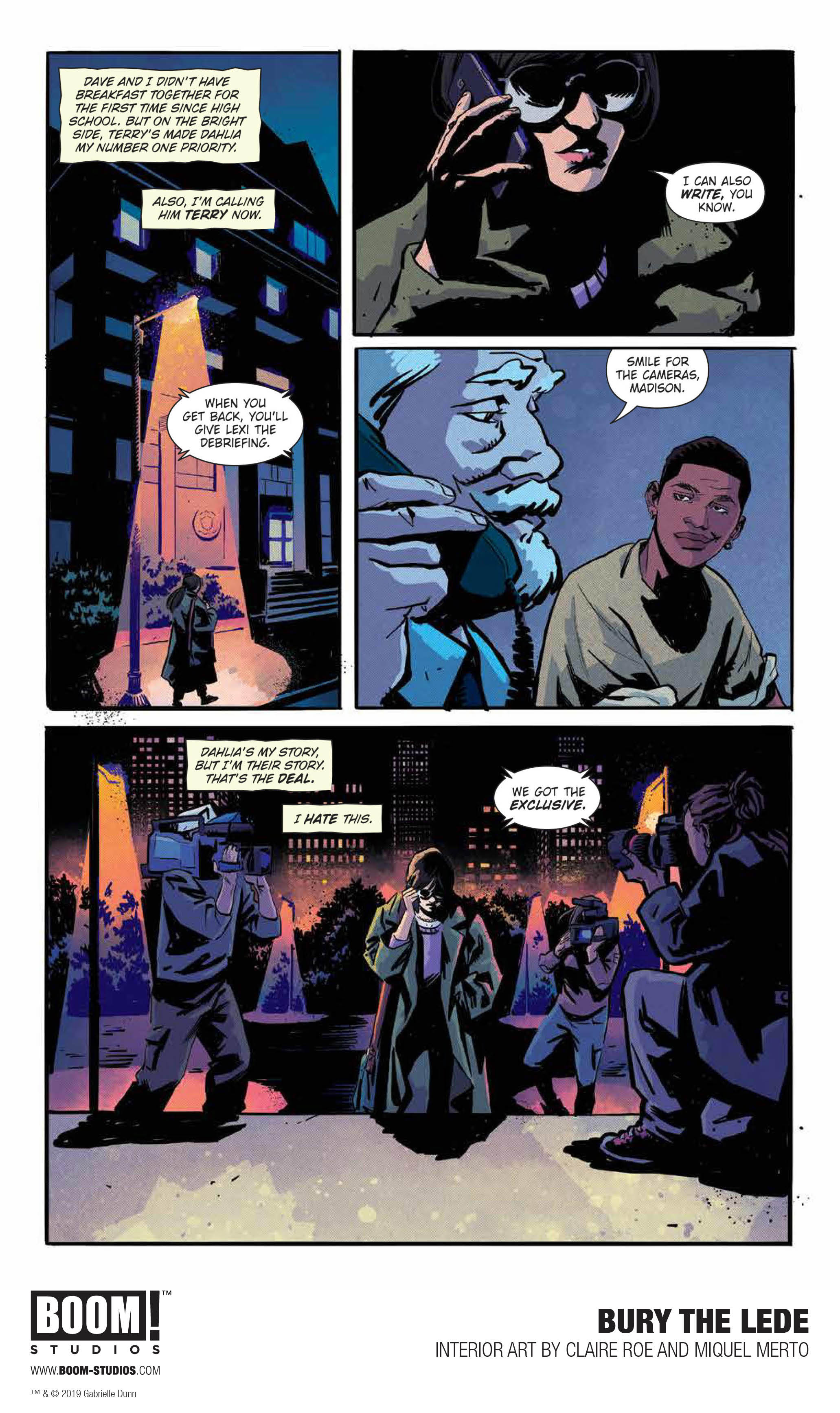 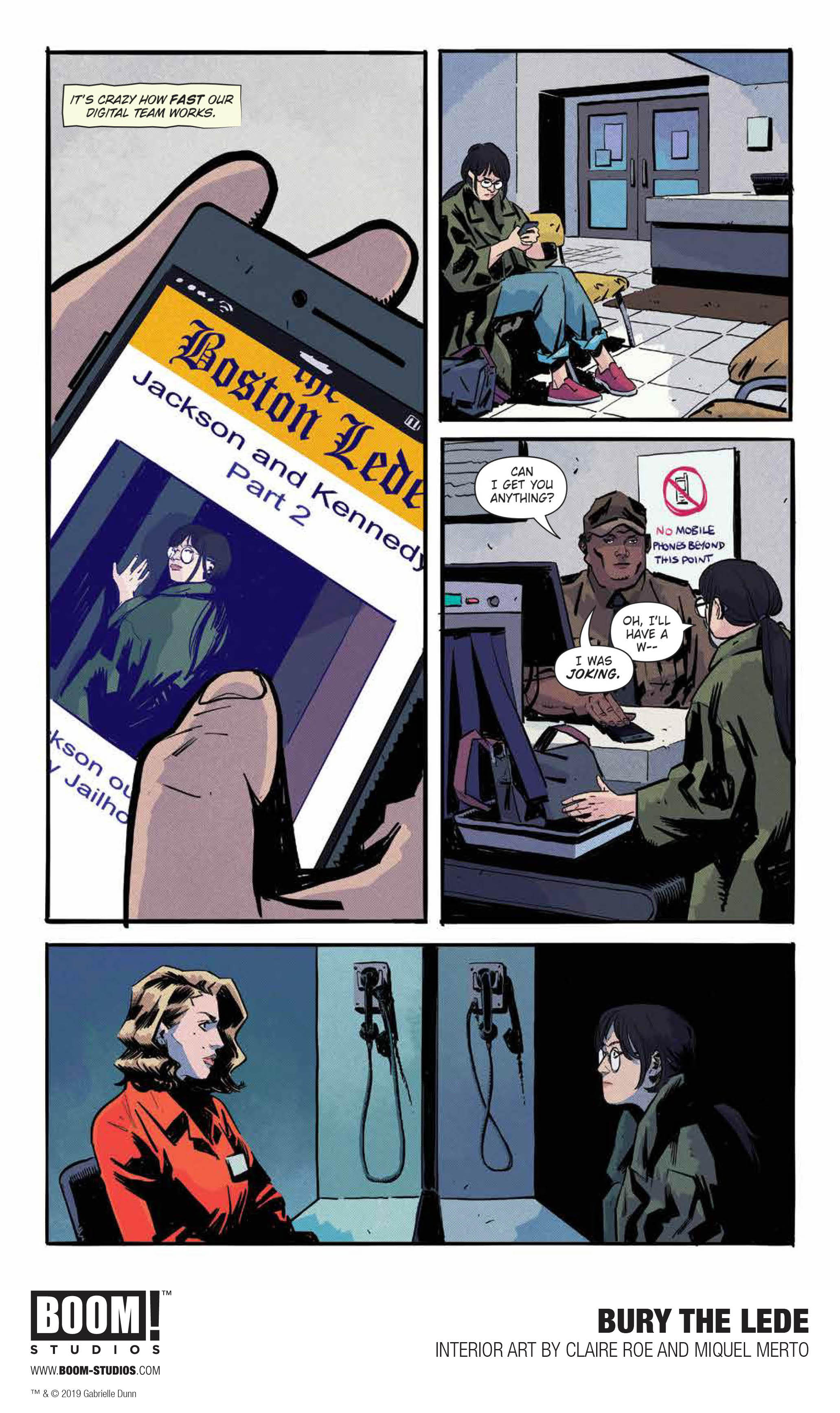 DISCOVER THE HULK’S DARK DESTINY IN THE MAESTRO TRAILER!