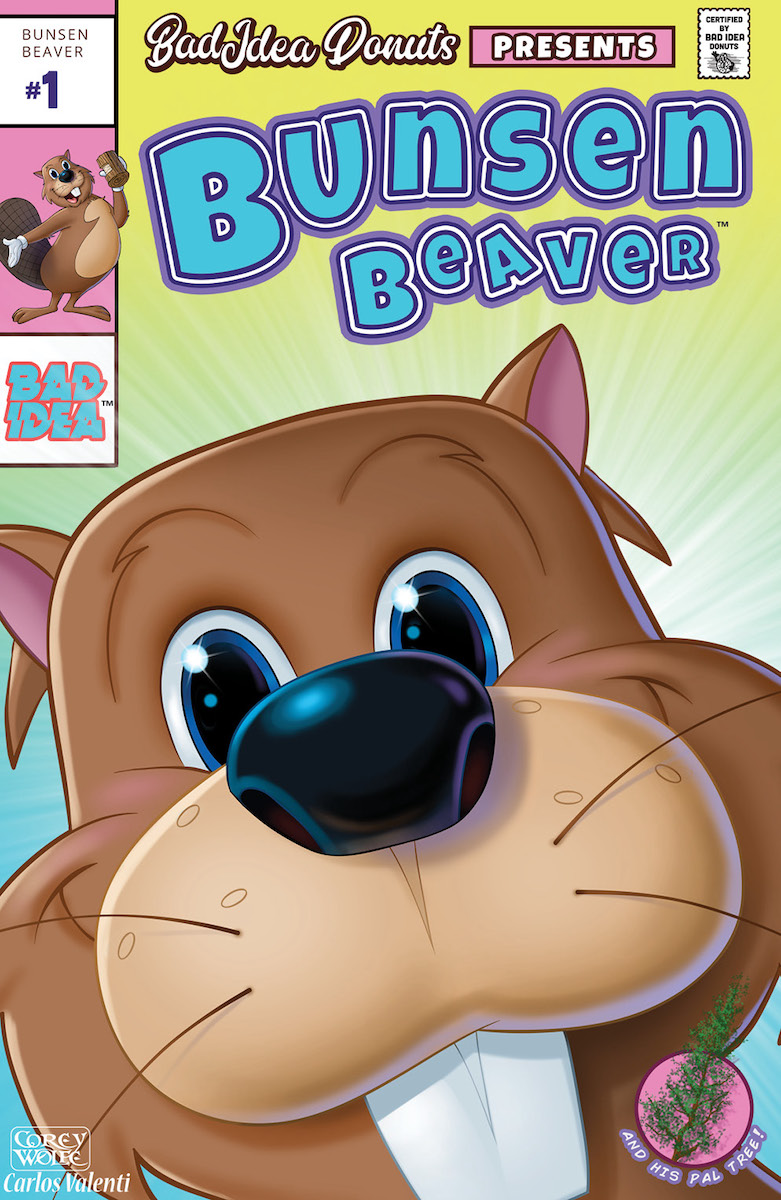 BAD IDEA was deadly serious on April Fool’s Day — BAD IDEA is over (as we know it). Long live BAD IDEA Donuts.

Still don’t believe? See it for yourself! BAD IDEA Donuts really is setting up a pop-up store at SC Comicon in Greenville, South Carolina this weekend (April 9-10). And anyone who purchases one of our, soon-to-be globally revered, Perfect Donuts will receive a copy of the BAD IDEA DONUTS PRESENTS: BUNSEN BEAVER AND HIS PAL TREE comic for free!

As further proof of our completely true and not-at-all just a mean joke intentions, we’ve compiled this FAQ based on the feedback we’ve received so far and have even included a quicksneak preview of the donut comic below.

Ha, I knew it! ‘BAD IDEA is over’ was just marketing. You guys were never really going away.
Question rejected. Please phrase your “questions” in the form of a, you know, question.

Sigh. Fine, is BAD IDEA really over?
As we know it.

I hate you. Okay, how is BAD IDEA over if you’re still selling new comics?
We’re not selling comics. We’re selling donuts, and the comics come free with purchase. Hence the whole “Long live BAD IDEA Donuts” thing we did up top.

You promise this isn’t some wild practical joke? If I go all the way to SC Comicon you guys will be there?
We guarantee it, or your donut is free!

But what’s it about?
It’s about the psychopathic tendencies of global corporate culture, the never-ending desire of the masses for newness at the expense of all else, the ever-worsening crisis of societal infantilization that nostalgia peddling is perpetuating, and the conflict created when these forces clash with the emotional instability inherent in modern day celebrity. But, most of all, it’s about the vile, unethical, immoral, reprehensible consequences we all – you, us, our creative partners, even our vendors – are silently witness to and unconscionably enable. But you know, enjoy your Perfect Donut.

…totally dude. Um, so there’s like a beaver in it too?
Yes! The epic tale of Bunsen Beaver debuts in this issue. We introduce Tree here. There’s a massive and unexpected death within these pages too. Oh, and television’s B. J. Novak makes his comic book debut!

And you’re just gonna give it away? For free?
Yes, the BAD IDEA DONUTS PRESENTS: BUNSEN BEAVER AND HIS PAL TREE is completely free with the purchase of a Perfect Donut.

How much is the donut?
The Perfect Donut comes in a high-end, luxury gift box and is just twenty dollars ($20)!

Can I buy more than one?
The Perfect Donut is strictly limited to one-per-customer and will only be available while supplies last.

How many supplies do you have?
Making the Perfect Donut is not only a time consuming and expensive process, it’s also boring as hell. We anticipate that we’ll produce about 300 Perfect Donuts before we get bored with the whole thing and move on to something else entirely.

What if I just want to read it, will you make it available digitally?
BAD IDEA did not release its comics digitally — just comics folks, sold just in comic book shops — and neither does BAD IDEA Donuts. If, however, BAD IDEA returns in spectacular and much anticipated fashion the stories contained within BAD IDEA DONUTS PRESENTS: BUNSEN BEAVER AND HIS PAL TREE will be reprinted in a later release.

Will there be a way for people who aren’t at SC Comicon to get one?
We’ve love to dough it but to bake it happen we’d kneed to a way to preserve that baked-that-day goodness. Something we don’t cake for granted. You could say, we’re all or muffin on this Perfect Donut thing.

Wow.
Question rejected. Please phrase your “questions” in the form of a, you know, question.

That was truly terrible.
Question rejected. Please phrase your “questions” in the form of a, you know, question.

That’s fine. I’m done. Especially after that pun vomit.
Question rejected. Please phrase your “questions” in the form of a, you know, question.

Oh, wait, what about the preview?

Hello? Are you still there?