I first remember David Lapham’s work on Magnus Robot Fighter and Harbinger from Valiant and it was great. In the years between Harbinger and today, David has established himself as a solid and compelling storyteller with an Eisner to prove it. Currently, David is working on a story of two damaged brothers who cope with life’s losses in very different ways. David was nice enough to stop by First Comics News to let our readers know what to expect from Damaged.

First Comics News: Who are the main characters?

David Lapham: The main characters begin with two brothers: Frank and Henry Lincoln. Now in their 60s, their lives diverged thirty five years earlier with an incident that sent Frank on a path to becoming the ultimate defender of the law as a cop and Henry on the path to becoming a vigilante. Then we have two younger characters in Jack Cassidy and Isaac Lordsman. Like Frank and Henry, they both started out as cops and it’s how these younger guys intersect with the older generation that brings them along different paths to justice. Ultimately, all four have entirely different viewpoints.

1st: With Frank as head of the Special Task Force on Organized Crime, has he been protecting Henry all these years?

David: Specifically, you’ll have to read the book, but thirty-five years ago the brothers uncovered a crime that the law couldn’t do anything about and was also a clear and present danger. They decide to take matters into their own hands. Things go very badly. Frank learns that the rules are there for a reason and Henry learns that he’s just got to get better at executing his plans.

1st: Since the characters went their separate ways 35 years ago, have they had any contact?

David: Possible, but unlikely. Though Frank has done his best to keep tabs on his younger brother’s actions in other cities and countries through news reports, clippings, things like that. Frank is very good at recognizing his brother’s handiwork.

1st: Is there mutual respect for what the other has accomplished or mutual animosity?

David: In their way, the brothers love and respect each other. NOT for what they do. Frank has no respect for Henry’s actions. He has massive respect for Henry’s abilities and there is still a strong sense that he loves his brother. I think that very much comes across, even as he’s trying to blow his head off. Conversely, Henry respects his brother for doing what he thought was right even though he believes the police are largely ineffectual. Henry believes he should not have involved his brother in his vigilante actions. That Frank wasn’t made for that. But again, I believe you get a strong sense that the brothers are brothers. That’s one of the unique things about this project. It’s not a typical comic book in that “I was jealous of you for years, and now I will kill you!” way. There’s a reality to it.

1st: As Frank is reaching retirement age, Jack Cassidy comes in to replace him. What does the new commander mean to Henry’s war on crime?

David: Nonspecific of Cassidy, just Frank being forced into retirement, to Henry means that his brother, however noble his fight, ultimately failed. That Henry was right all along. Frank being put to pasture means that it’s time for Henry, who had stayed away from San Francisco out of respect for his brother, to come home and clean up his city. Cassidy is inconsequential—at least at first.

1st: Henry is also reaching retirement age, is there a retirement plan for vigilantes?

David: Is a pine box a retirement plan?

Henry’s a few years younger, also, it’s one thing, like Frank, to be a top cop, but it’s another thing to travel the world as a mercenary and vigilante. Meaning Henry’s a rock hard dude. A soldier through and through. Believe me, he’s got plenty of gas still in his tank.

1st: If you are a murderous vigilante who spends his life killing criminals, where do you find a replacement? Craig’s List?

David: When the master is ready, the student will appear. That’s one, here’s another… Be careful what you wish for, Henry. You just might get it.

1st: After fighting crime for 35 years and giving it their all, have Frank or Henry made a difference?

David: That’s kind of like the stimulus package. It’s up for debate. Some say it was a whole lot of nothing but waste, others might say where would we be if we DIDN’T have it. 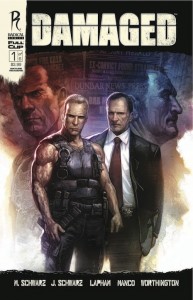 Plus, Henry saved me one time in France. I was being hounded by this mime and if Henry didn’t put two in his brain, I might be rotting on Devil’s Island right now instead of writing and drawing funnybooks.

1st: What makes Damaged so cool and exciting that no comic reader will want to miss the first issue?

David: Manco’s art is insane. Everybody likes great art in comics, so there alone you cannot miss. Plus, one of the cool things Radical did is give me 30-plus pages for the first issue, so you really get a hell of a chunk of story. It’s because of that that I could really give the space for a killer opening sequence and still work back to the main story. You get a lot in this comic. Point blank, it’s a damn good read.

Click the image to go to this article at First Comics News or click here to learn more aboutDamaged.

Rik Offenberger has worked in the comic field as a retailer, distributor, reporter, public relations coordinator, writer and publisher since 1990. He owns and operates the e-mail bases Super Hero News service, and his published works in print can be seen in The Comics Buyers Guide, Comic Retailer, Borderline Magazine, and Comics International. On the internet he has worked as a writer and/or editor for Silver Bullet Comicbooks, Comic Book Resources, Newsarama and First Comics News. He was the Public Relations Coordinator at Archie Comics for a decade. He is currently the Editor-In-Chief at G-Man Comics. For TwoMorrows Publications, Rik co-wrote The MLJ Companion with Paul Castiglia and Jon B. Cooke, charting the history of Archie’s superheroes, and for Gemstone Publishing wrote chapters of The Overstreet Comic Book Price Guide to Lost Universes.