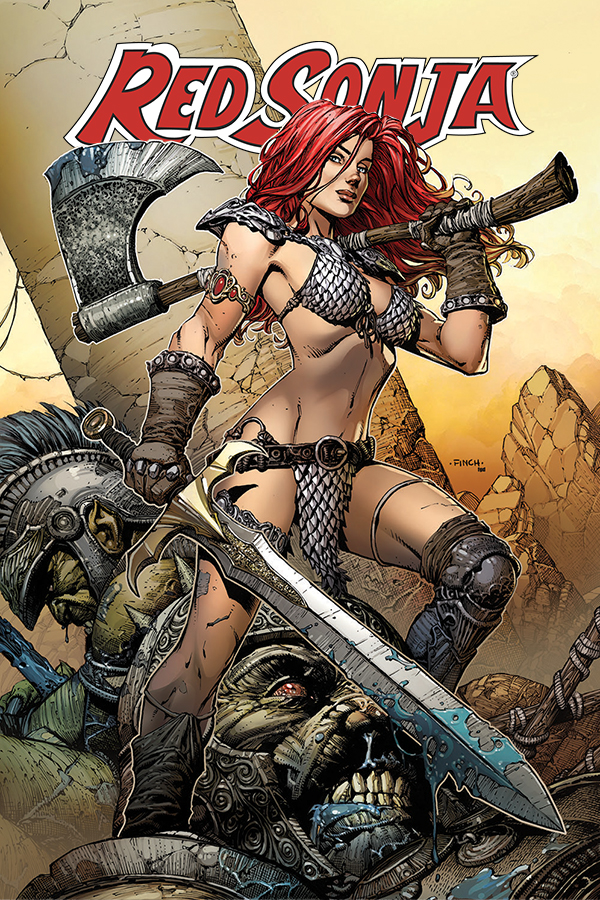 Finch’s illustrations have graced nearly every major character and title at the biggest publishers, and yet he has never once drawn the She-Devil With a Sword in an official capacity. Dynamite is correcting that for fans today, with a stunning special edition available in a range of versions and with even more extras to complete the collection.

With its stunning colors by frequent collaborator Frank D’Armata, fans can get the cover with all the traditional trade dress, without that as a “virgin” edition, enhanced with a special metal treatment, or as a black and white line art version showcasing David’s legendary skills. The Indiegogo campaign also offers reward tiers for combo packs, signatures, CGC grading, a ready to print lithograph, and even a limited number of original sketches.

A special virgin line art cover will only be available to backers in the first 48 hours!

The new cover will be printed on the yet to release Red Sonja: The Price of Blood #1. This new series is an early chapter of the She-Devil’s adventures, featuring a less refined and more bloodthirsty Hyrkanian heroine. Experience Sonja scribe Luke Lieberman teams up with fan-favorite artist Walter Geovani for a tale guaranteed to be full of action.

David Finch got his start in comics over 25 years ago in 1994. The young superstar started in the Top Cow stable assisting and then taking over from Marc Silvestri on Cyberforce. While still at Image and debuting on rankings of top tier artist, David took his talents to Aphrodite IX and his creator-owned title Ascension. As the new century dawned, Marvel took notice of the rising star and attached him to an ongoing gig on Ultimate X-Men, the history-making Avengers: Disassembled story arc, and following New Avengers relaunch.

Following a critically acclaimed run on Moon Knight, DC tapped him as the next definitive Batman artist. He’s since contributed to multiple eras of the Dark Knight, including a New 52 title fully dedicated to showcasing his talents. With Eisner-winning writer Tom King, he followed into the next relaunch of the Rebirth era, and a widely publicized Catwoman story arc. Through the years he has also worked on Justice League, Wonder Woman, and more.

Though he’s worked with Dynamite before on several Vampirella covers, The Shadow/Batman, Charlie’s Angels, and Xena, fans won’t want to miss his all-new gorgeous take on Red Sonja.