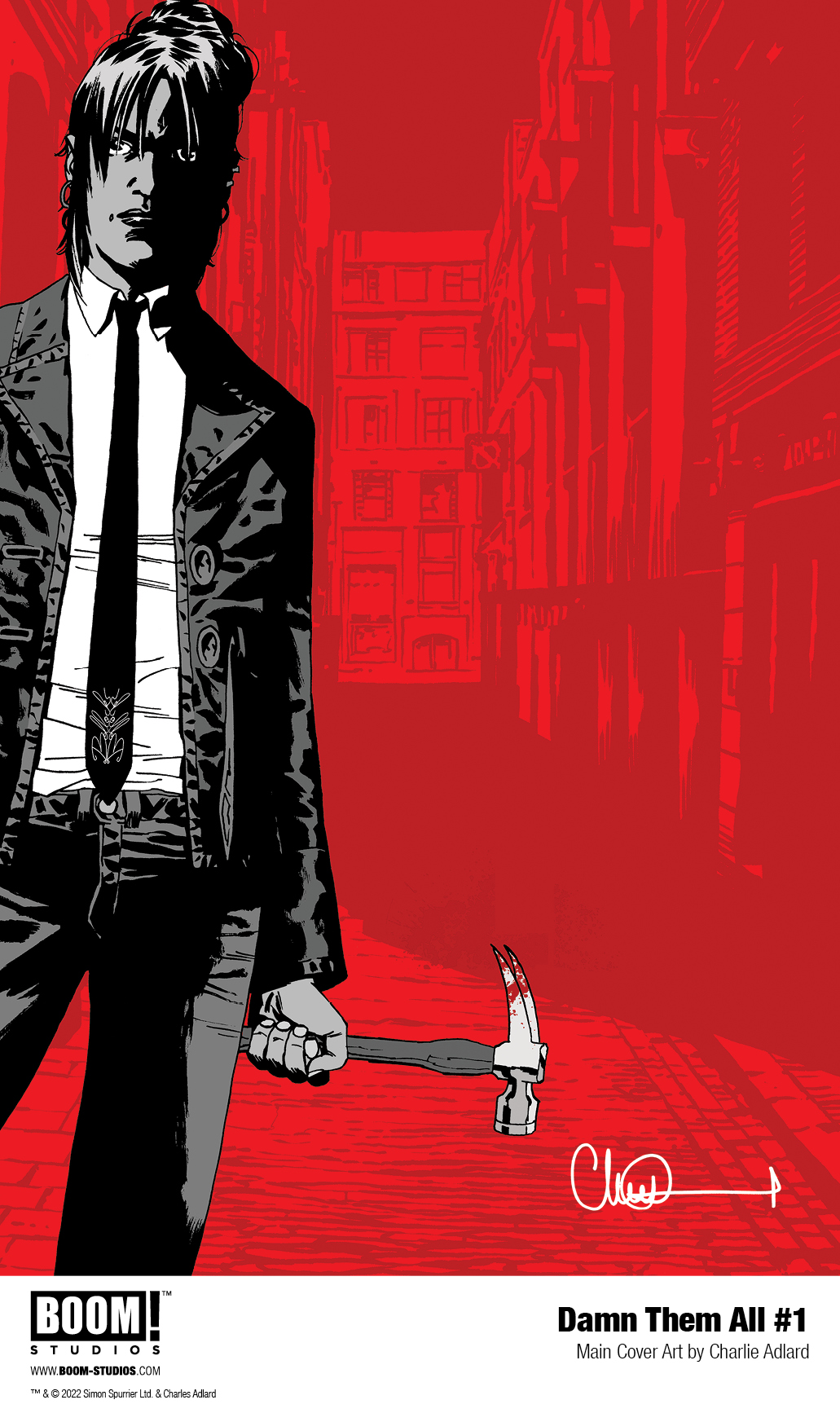 Meet Ellie “Bloody El” Hawthorne: occultist-for-hire. Following the death of Ellie’s uncle, an infamous magician and occult detective, the 72 devils of the Ars Goetia are mysteriously freed from their infernal realm. Now it’s up to Ellie to track down each of these exiled demons and damn them right back to Hell by any means necessary… holy water, conjuration, or just her trusty, rusty claw hammer.

Simon “Si” Spurrier is an Eisner Award-nominated writer of novels, television shows, and comics. He is known for his work on comic book series such as X-Men and Star Wars for Marvel Entertainment and Hellblazer and Suicide Squad for DC Comics. His creator-owned projects include BOOM! Studios hits such as Alienated, Coda, The Spire, and Six-Gun Gorilla.

“DAMN THEM ALL is the right project at the right time. A series mixing crime and occultism, it’s the perfect fusion of Charlie’s peerless storytelling and my own ghastly preoccupations,” said Spurrier. “It’s hard boiled, it’s clever, it’s bleakly funny, but above all it’s angry to its core. Angry at the world, at the injustice, at the £$%#s who run the show, and ultimately at the creator responsible for this utterly imperfect creation. This is a book about demons, in which—spoilers—the demons aren’t the bad guys.”

Charlie Adlard is a British comic book artist and illustrator best known for his work on the global phenomenon, The Walking Dead. Charlie has been a “veteran” of the comic industry for over 25 years. He’s spent the majority of his time since 2003 working on The Walking Dead, which finished in 2019, and he has received many industry awards for his work on the series culminating in winning the Sergio Aragonés International Award for Excellence in Comic Art in 2019. In his time as a cartoonist he has worked on many other projects as far reaching as Mars Attacks, The X-Files, Judge Dredd, Savage, Batman, X-Men, and Superman, as well as creator-owned projects closer to his heart like Astronauts in Trouble, Breath of the Wendigo, Codeflesh, Rock Bottom, Vampire State Building, and White Death.

“Charlie, Si, Sofie, and Jim make a deadly combination – an all-Brit creative team composed of living and future legends, bringing you an unapologetic story about the demons that lurk inside men’s hearts and the one Londoner who aims to DAMN THEM ALL,” said Eric Harburn, Executive Editor, BOOM! Studios.

DAMN THEM ALL is the newest release from BOOM! Studios’ eponymous imprint, home to critically acclaimed original series, including BRZRKR by Keanu Reeves, Matt Kindt, and Ron Garney; Something is Killing the Children by James Tynion IV and Werther Dell’Edera; Once & Future by Kieron Gillen and Dan Mora; We Only Find Them When They’re Dead by Al Ewing and Simone Di Meo; Seven Secrets by Tom Taylor and Daniele Di Nicuolo; The Many Deaths of Laila Starr by Ram V and Filipe Andrade; Basilisk by Cullen Bunn and Jonas Scharf; Grim by Stephanie Phillips and Flaviano; and the upcoming series Briar by Christopher Cantwell and Germán García and Stuff of Nightmares by R.L. Stine and A,L. Kaplan. The imprint also publishes popular licensed properties, including Dune: House Atreides from Brian Herbert, Kevin J. Anderson, and Dev Pramanik; Mighty Morphin and Power Rangers from Ryan Parrott, Mat Groom, Moises Hidalgo, and Marco Renna; and Magic from Jed McKay and Ig Guara.

Print copies of DAMN THEM ALL #1 will be available for sale in October 2022 exclusively at local comic book shops (use comicshoplocator.com to find the nearest one) or at the BOOM! Studios webstore. Digital copies can be purchased from content providers, including comiXology, iBooks, Google Play, and Kindle. 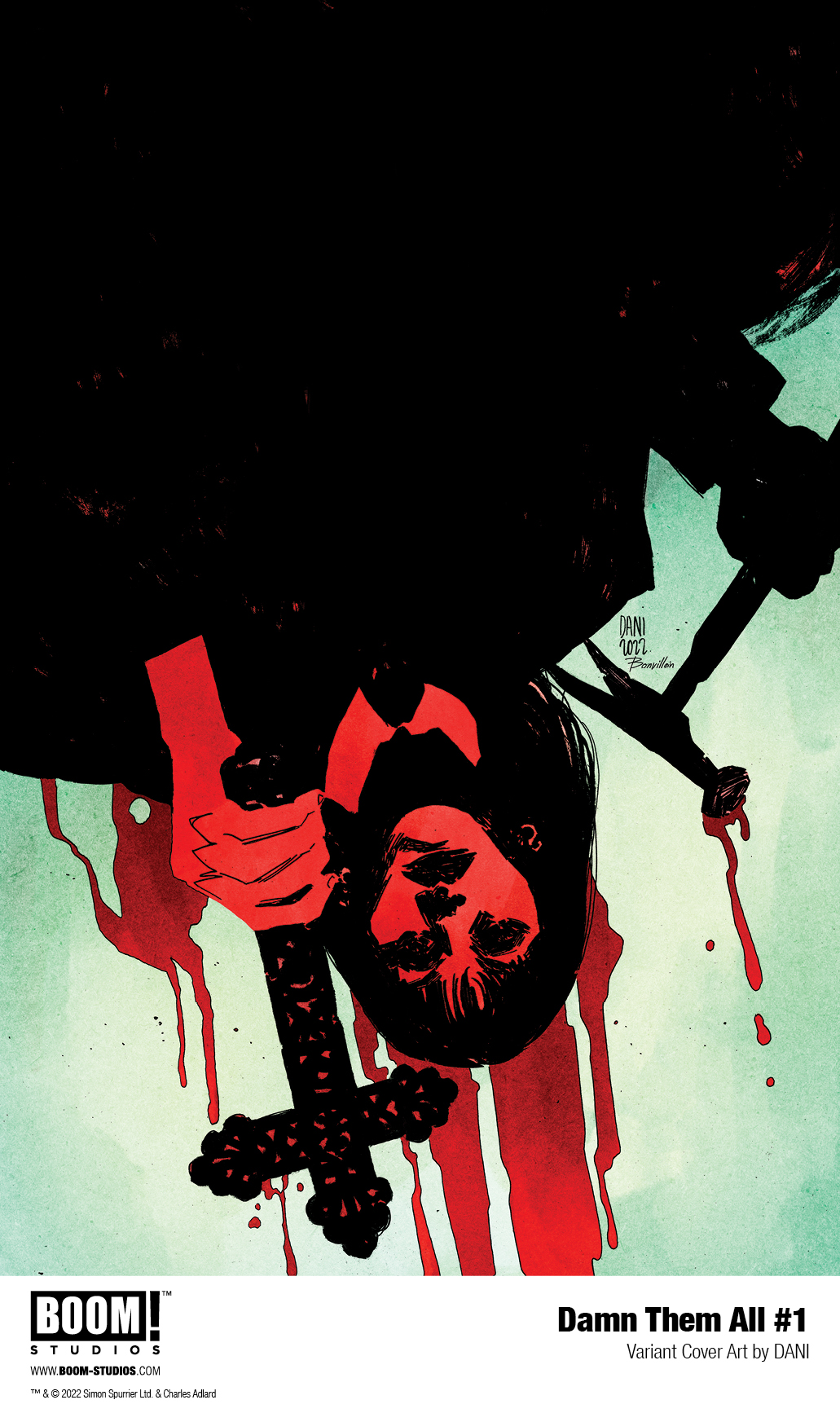 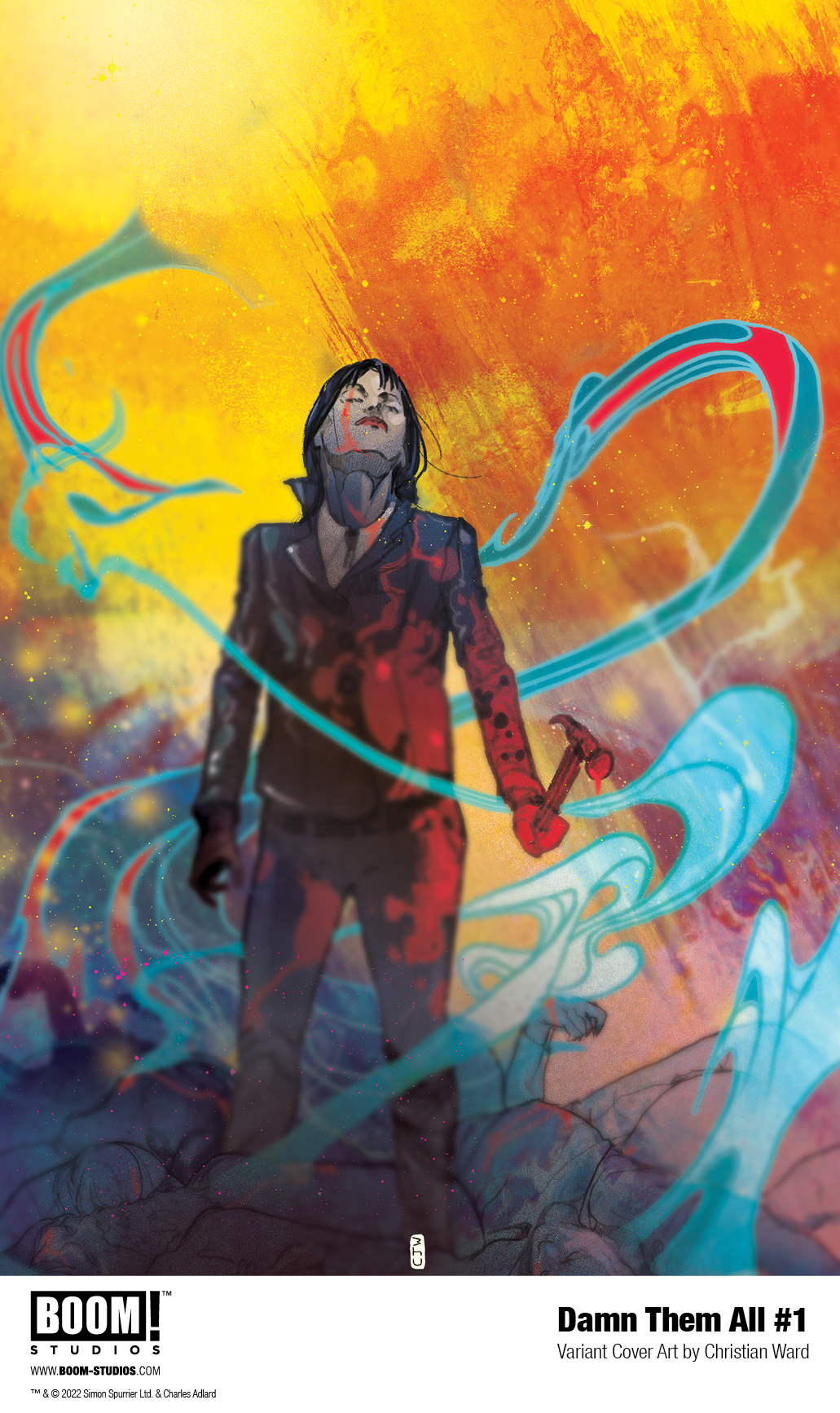 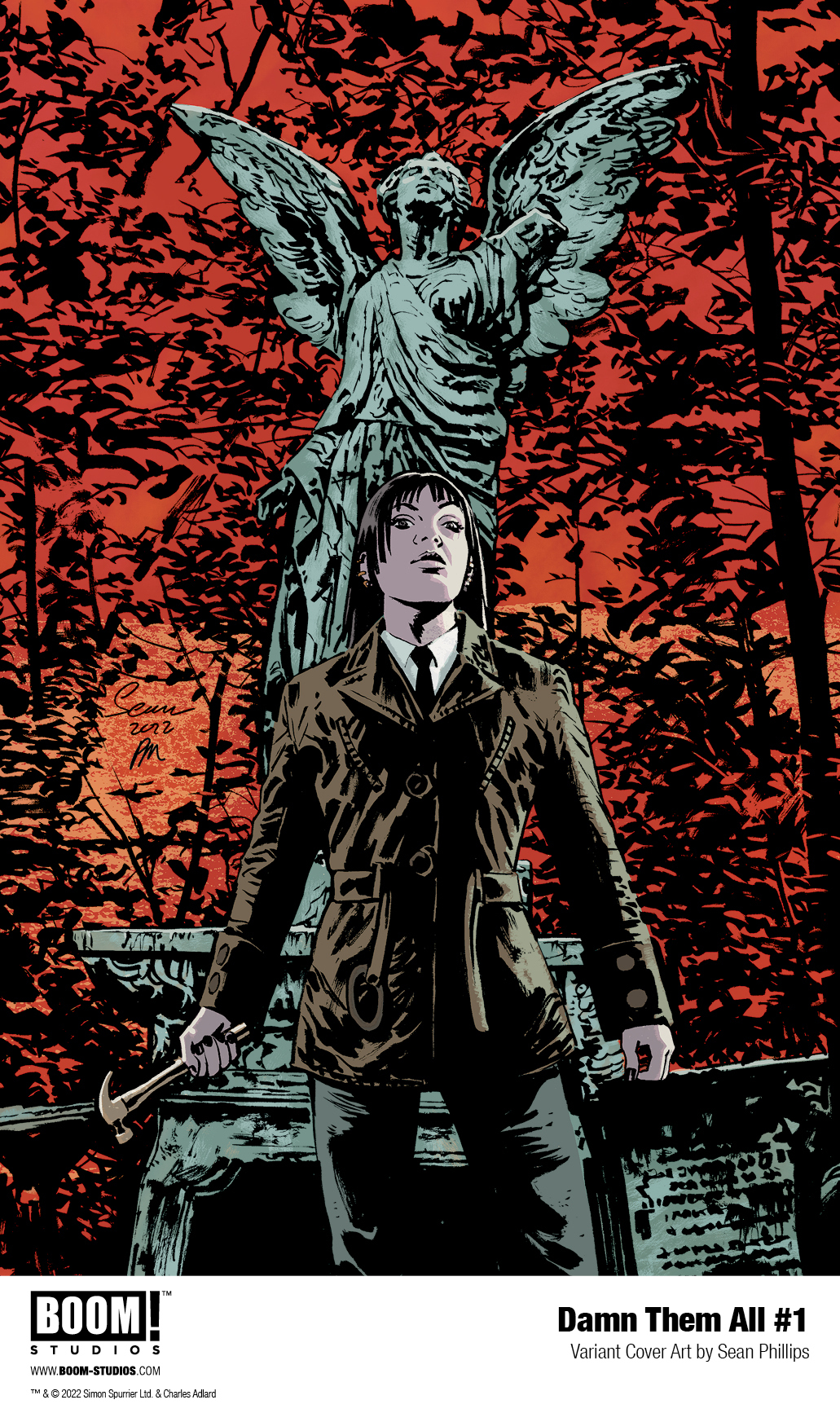 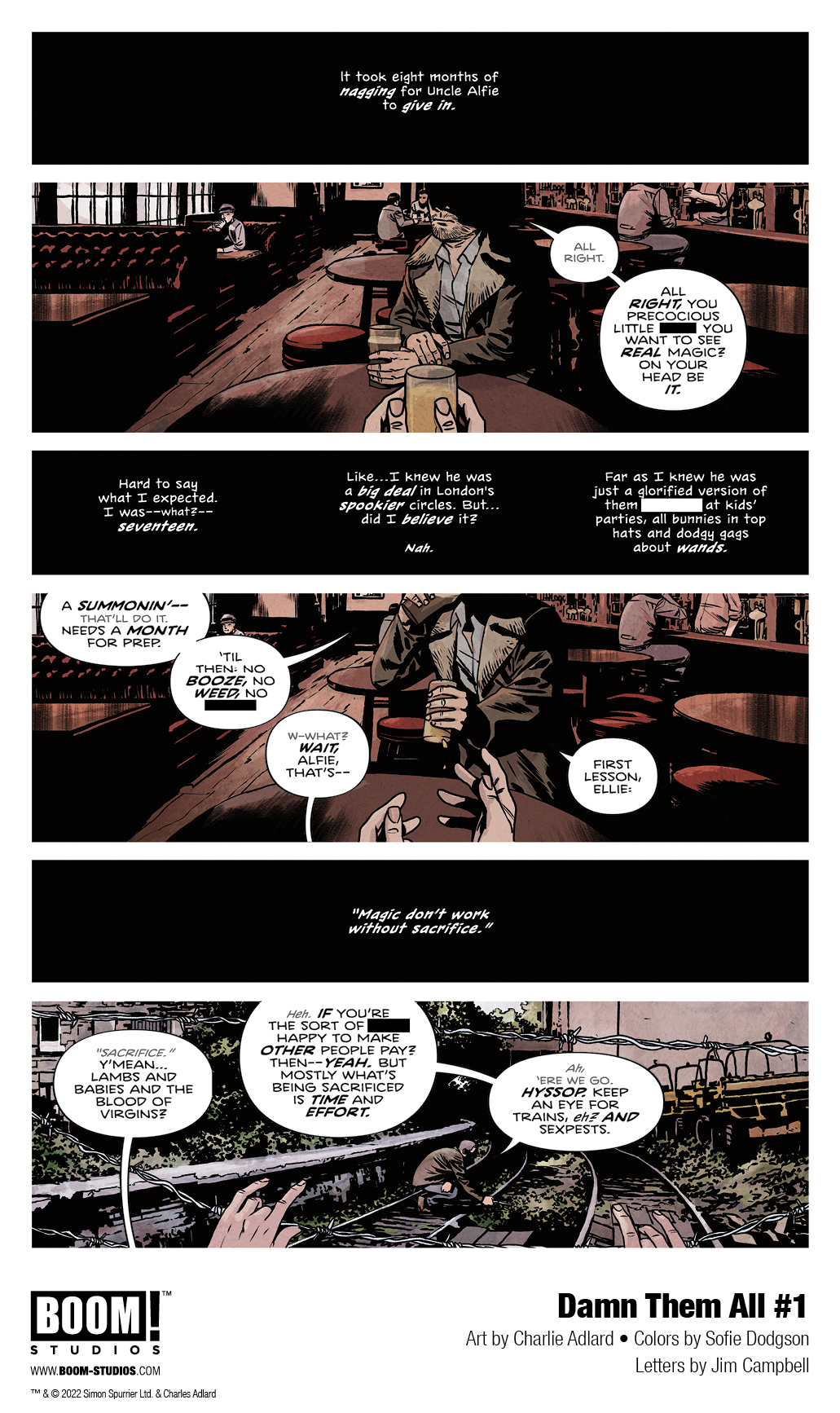 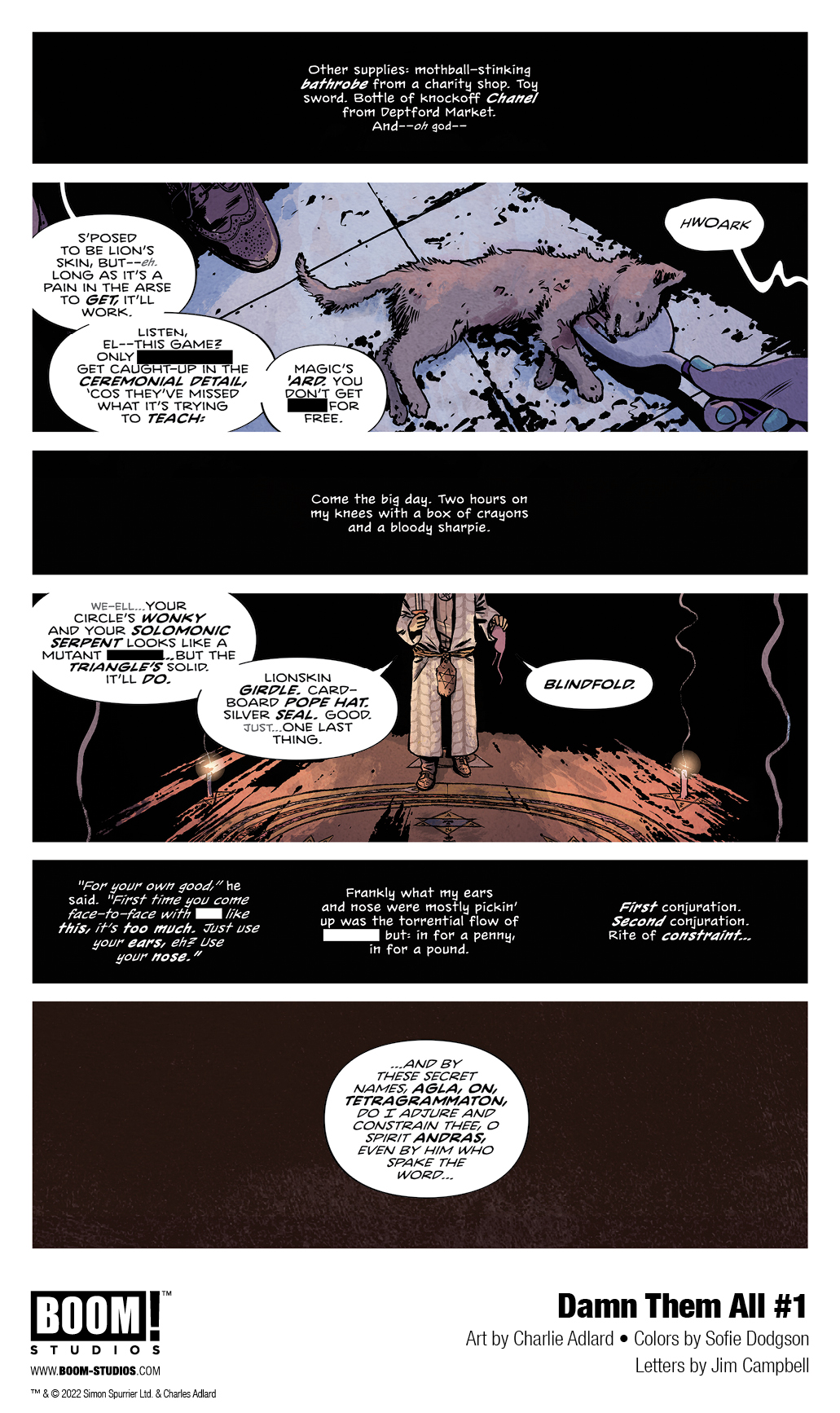 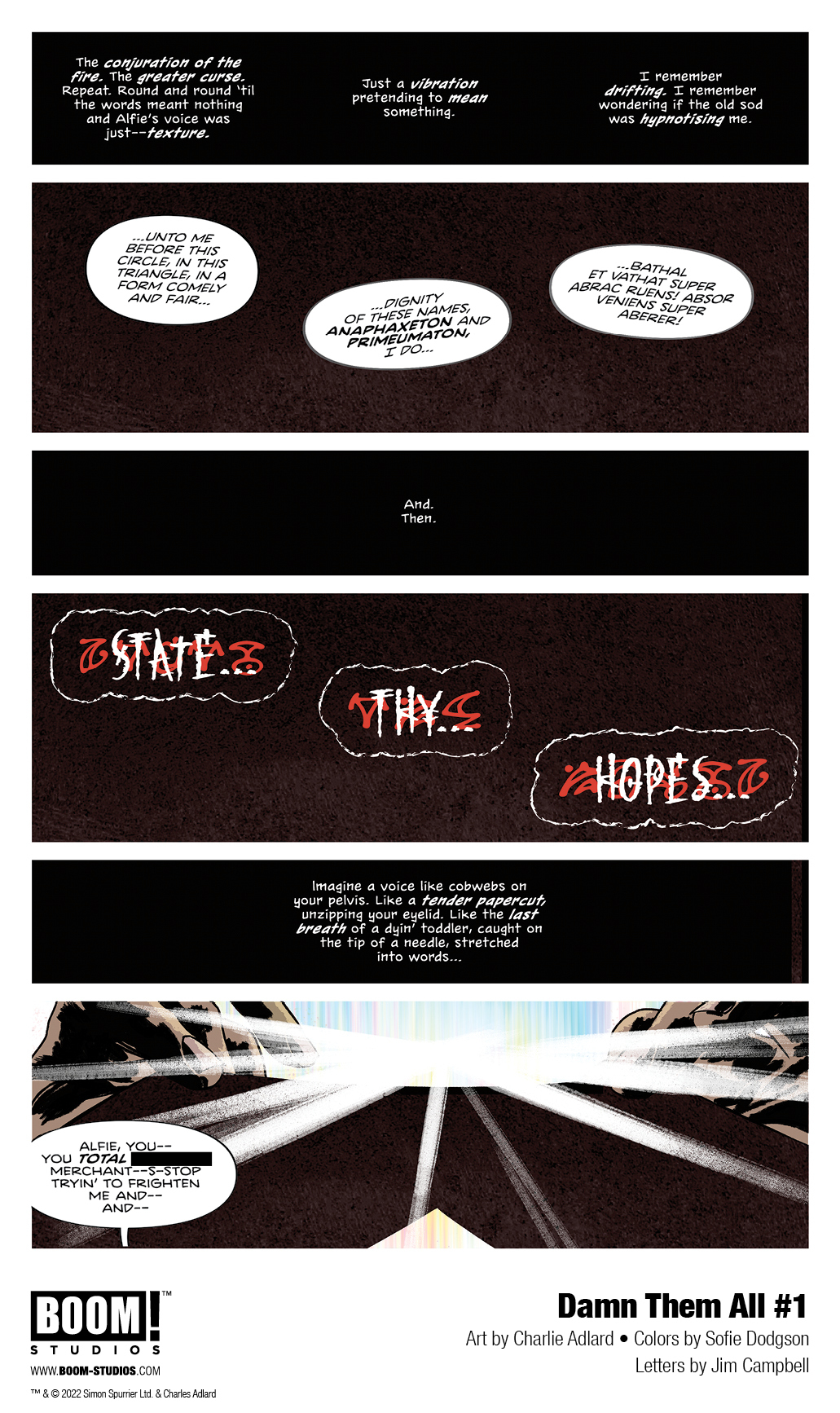 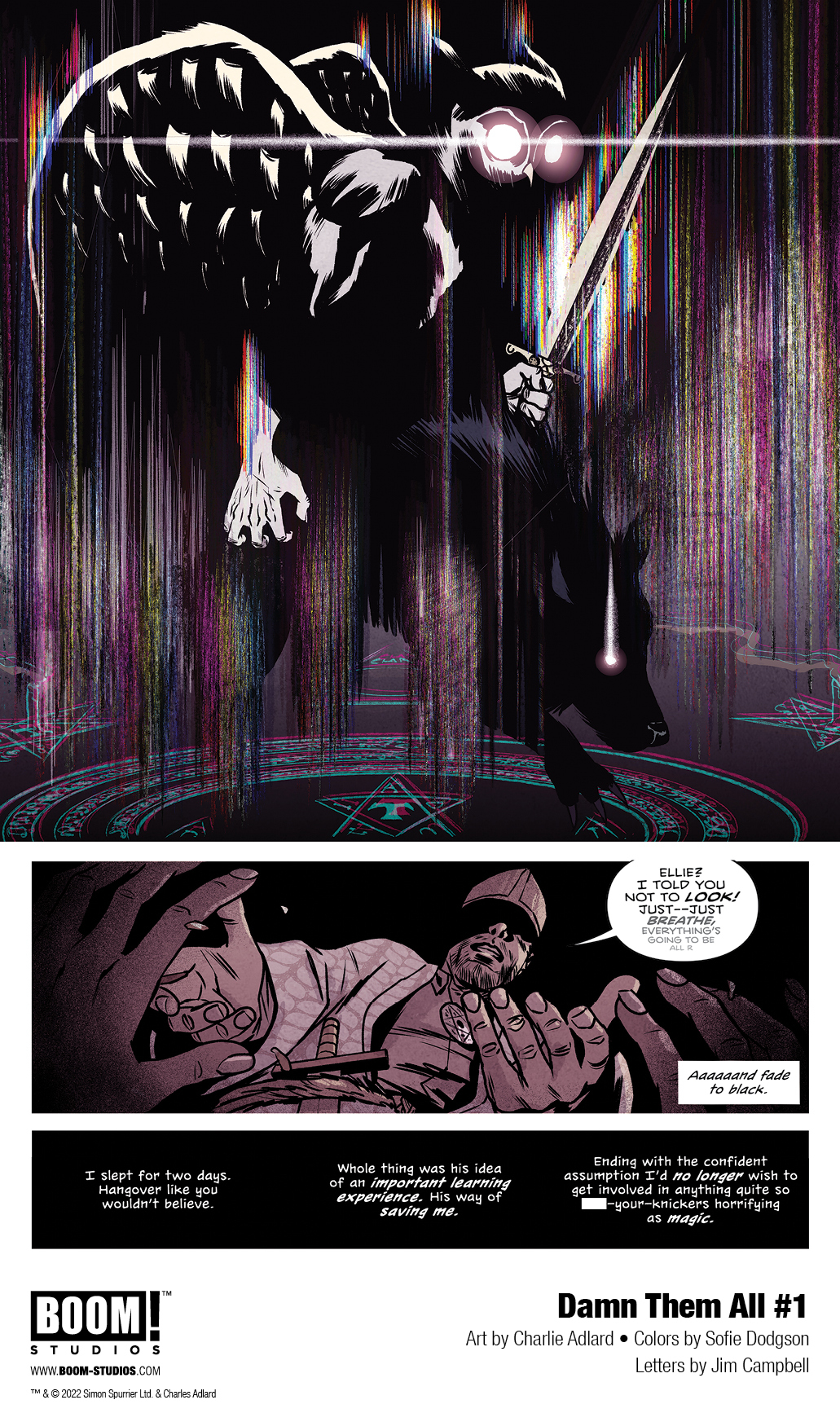