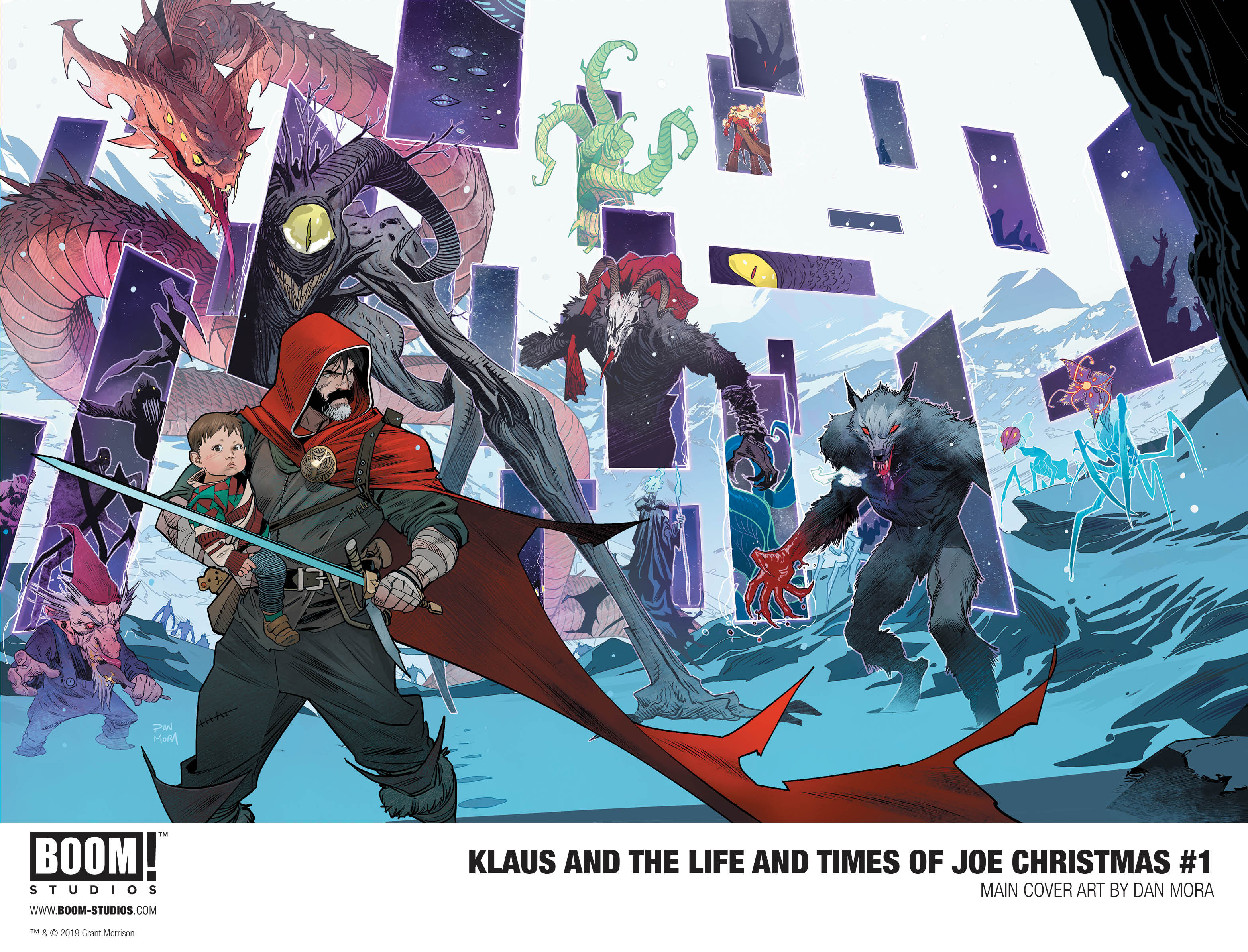 Nothing’s calm but all is bright in this once-in-a-lifetime special KLAUS event—a completely silent issue! Meet Joe Christmas, a regular human man who’s known Klaus all his life, and fought beside him for most of it. Each of the 25 two-page vertical spreads will feature a new Christmas adventure with stunning illustrations by Dan Mora depicting a day in the incredible life of Joe Christmas, a very special young boy who grows up to become one of Klaus’ staunchest allies and closest friends.

KLAUS AND THE LIFE & TIMES OF JOE CHRISTMAS #1 continues the annual holiday tradition of new Klaus comic book releases, dating back to the franchise launch. Now, get a glimpse of a never-before-seen period of Klaus’ past, complete with gigantic battles against monsters, beautiful moments of holiday spirit, and special guest appearances from old allies and new foes.

“As ever, working with Dan Mora on a new KLAUS story is a highlight of my year. For this year’s special we decided to do something a little different by creating a Christmas advent calendar story featuring 25 iconic scenes from the adventures of Klaus,” said writer Grant Morrison. “We wanted to give Dan free rein for his remarkable creativity and imagination while also providing a narrative element that allows the images to tell the exciting, poignant and completely wordless life story of one JOE CHRISTMAS, from his humble beginnings to his inevitable end, as we see how that life has been affected and changed by his encounters and adventures with Klaus.”

KLAUS AND THE LIFE & TIMES OF JOE CHRISTMAS #1 features a main cover illustrated by Mora.

“Every year I look forward to working with Grant on a brand new issue of KLAUS. I love visiting this world and drawing all new characters, monsters, and planets, but this year is going to be very special because the entire issue is silent!” said artist Dan Mora. “That means I’ve worked overtime to capture every nuance of storytelling, character, and action to bring this Klaus story to life and introduce everyone to the LIFE & TIMES OF JOE CHRISTMAS, making this a very exciting challenge for me and hopefully a very exciting issue for fans.”

KLAUS AND THE LIFE & TIMES OF JOE CHRISTMAS #1 is the newest release from BOOM! Studios’ eponymous imprint, home to critically acclaimed original series, including Once & Future by Kieron Gillen and Dan Mora; Faithless by Brian Azzarello and Maria Llovet; Abbott by Saladin Ahmed and Sami Kivelä; Bury The Lede by Gaby Dunn and Claire Roe; Klaus by Grant Morrison and Dan Mora; Something is Killing The Children by James Tynion IV and Werther Dell’Edera; and the upcoming Folklords by Matt Kindt and Matt Smith. The imprint also publishes popular licensed properties including Joss Whedon’s Firefly from Greg Pak and Dan McDaid; Buffy The Vampire Slayer from Jordie Bellaire and David Lopez; and Mighty Morphin Power Rangers from Ryan Parrott and Daniele Di Nicuolo.

“Just when you think there’s nothing special left to say about Santa Claus, Grant and Dan rise to the challenge. With over fifty pages of Dan Mora’s art and Grant’s masterfully minimalist storytelling, this year’s special may be our most powerful yet,” said Eric Harburn, Senior Editor, BOOM! Studios. “Grant and Dan have truly outdone themselves with this wordless issue of KLAUS that will delight longtime fans and astonish new readers.”

Print copies of KLAUS AND THE LIFE & TIMES OF JOE CHRISTMAS #1 will be available for sale on December 18, 2019 at local comic book shops (use comicshoplocator.com to find the nearest one) or at the BOOM! Studios webstore. Digital copies can be purchased from content providers, including comiXology, iBooks, Google Play, and the BOOM! Studios app.

KLAUS: HOW SANTA CLAUS BEGAN, the softcover collection of the original award-winning series, is currently available everywhere books are sold.