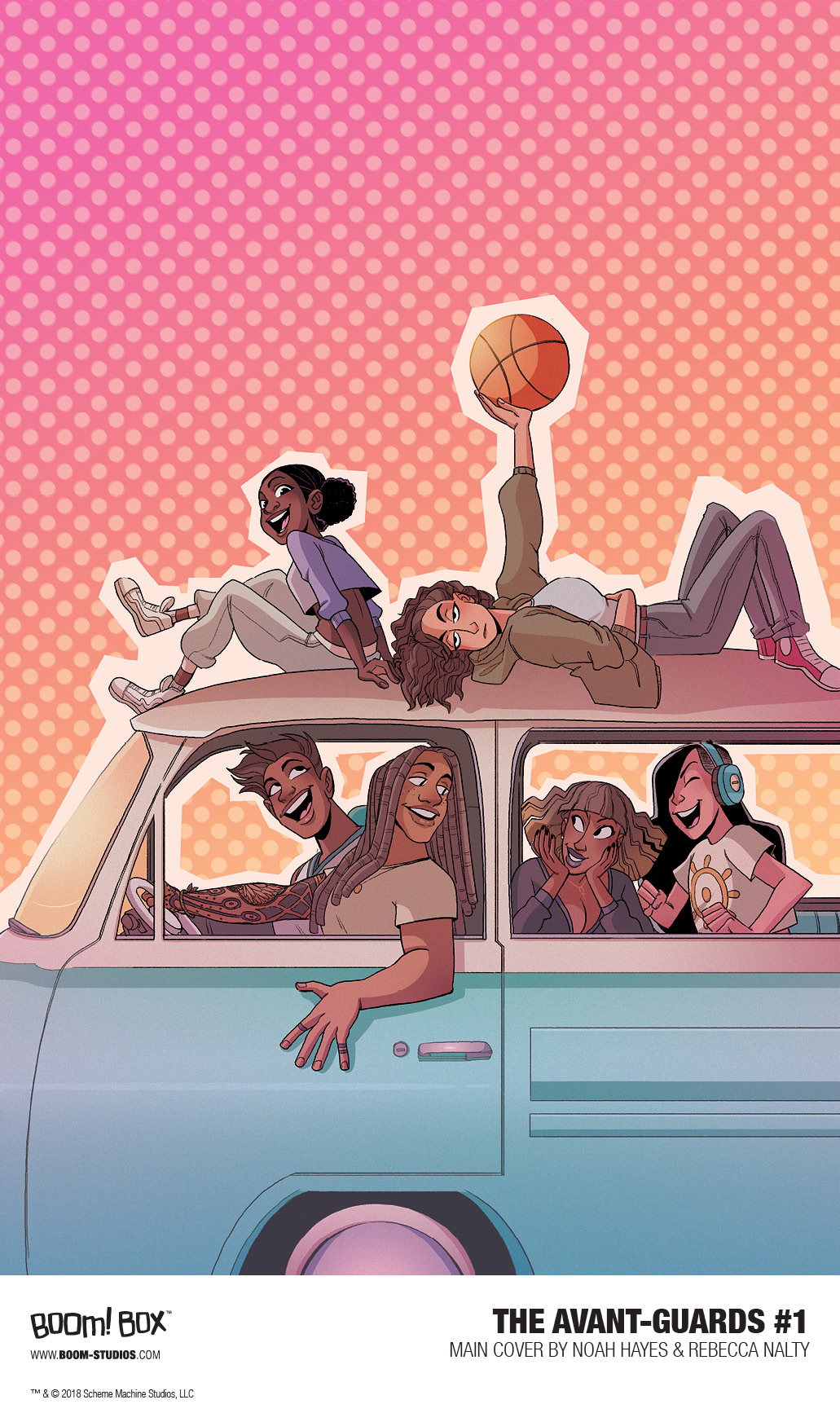 LOS ANGELES, CA (September 28, 2018) – BOOM! Studios today announced THE AVANT-GUARDS #1, kicking off an all-new twelve issue series in January 2019 from writer Carly Usdin (creator of the critically-acclaimed Heavy Vinyl) and artist Noah Hayes (Wet Hot American Summer) where finding what you’re looking for on and off the court is the toughest shot of all!

Welcome to the Georgia O’Keeffe College of Arts and Subtle Dramatics, an historically all-female school whose population is decidedly more drama geek than jock. Liv, aspiring actor and basketball enthusiast, doesn’t understand why she can’t be both, but she seems alone in that belief…until Charlie.

Charlie is a recent transfer, a former star basketball player, and the answer to all of Liv’s problems. She’ll stop at nothing to get the reluctant Charlie to join the ragtag group of misfits that make up their fledgling team.

“I started playing basketball in middle school, and I still play now as an adult. It’s a lovely constant in my life that I wanted to honor with THE AVANT-GUARDS,” said writer Carly Usdin. “The idea of a funny, pure series about friendship, teamwork, and perseverance really appeals to me right now, and I’m so excited to share this with the world in 2019.”

“Gearing up for THE AVANT-GUARDS has been such a blast,” said artist Noah Hayes. “Carly’s created such a wonderful cast of characters that were a ton of fun to design. I hope readers will enjoy the journey we’re taking them on and find them as charming and memorable as I do.”

THE AVANT GUARDS #1 features a main cover by Hayes and a variant cover by Veronica Fish (SLAM!).

“Carly wowed audiences with the humor, heart and honesty she brought to Heavy Vinyl and Noah is dropping jaws with his stunning work on Wet Hot American Summer – and they’re unstoppable together on a book like THE AVANT-GUARDS,” said Shannon Watter, Senior Editor, BOOM! Studios. “We’re thrilled to have twelve issues to bring you on the journey of Liv and Charlie to not only form an unbeatable team between the buzzers, but also to challenge the ideas about who they are – and more importantly, who they can be off the court too.”

Print copies of THE AVANT-GUARDS #1 will be available for sale in January 2019 at local comic book shops (use comicshoplocator.com to find the nearest one) or at the BOOM! Studios webstore. Digital copies can be purchased from content providers, including comiXology, iBooks, Google Play, and the BOOM! Studios app. 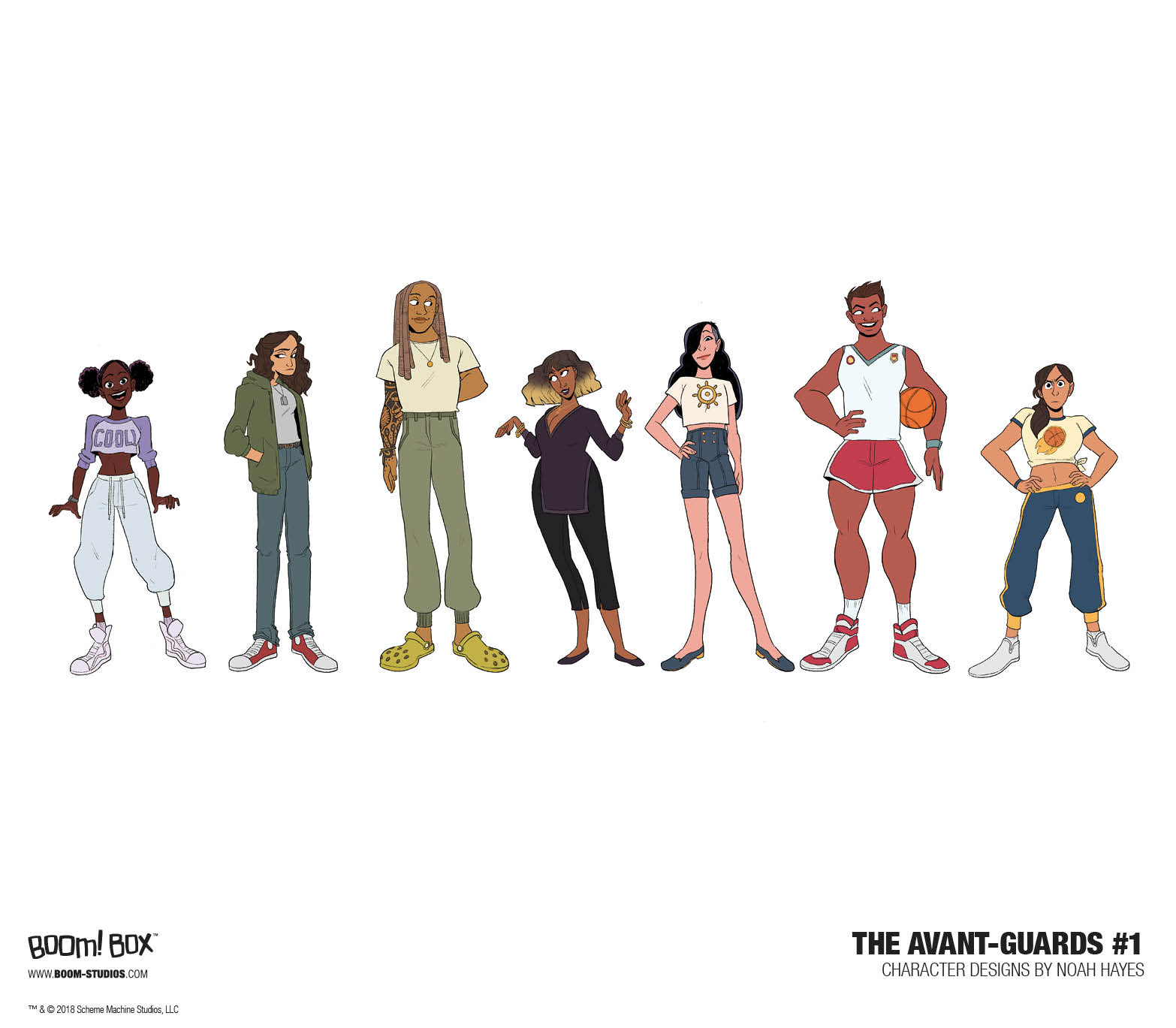 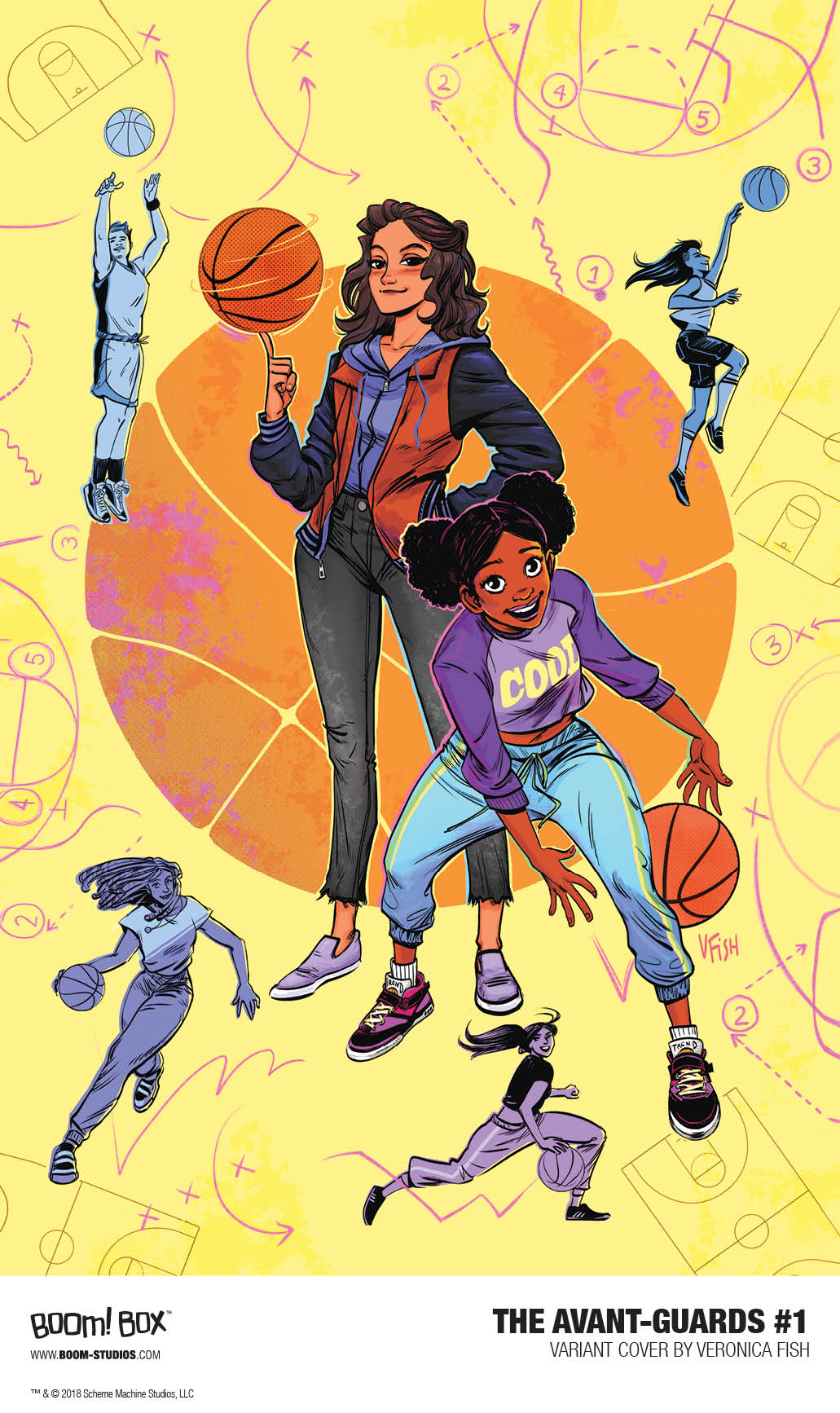 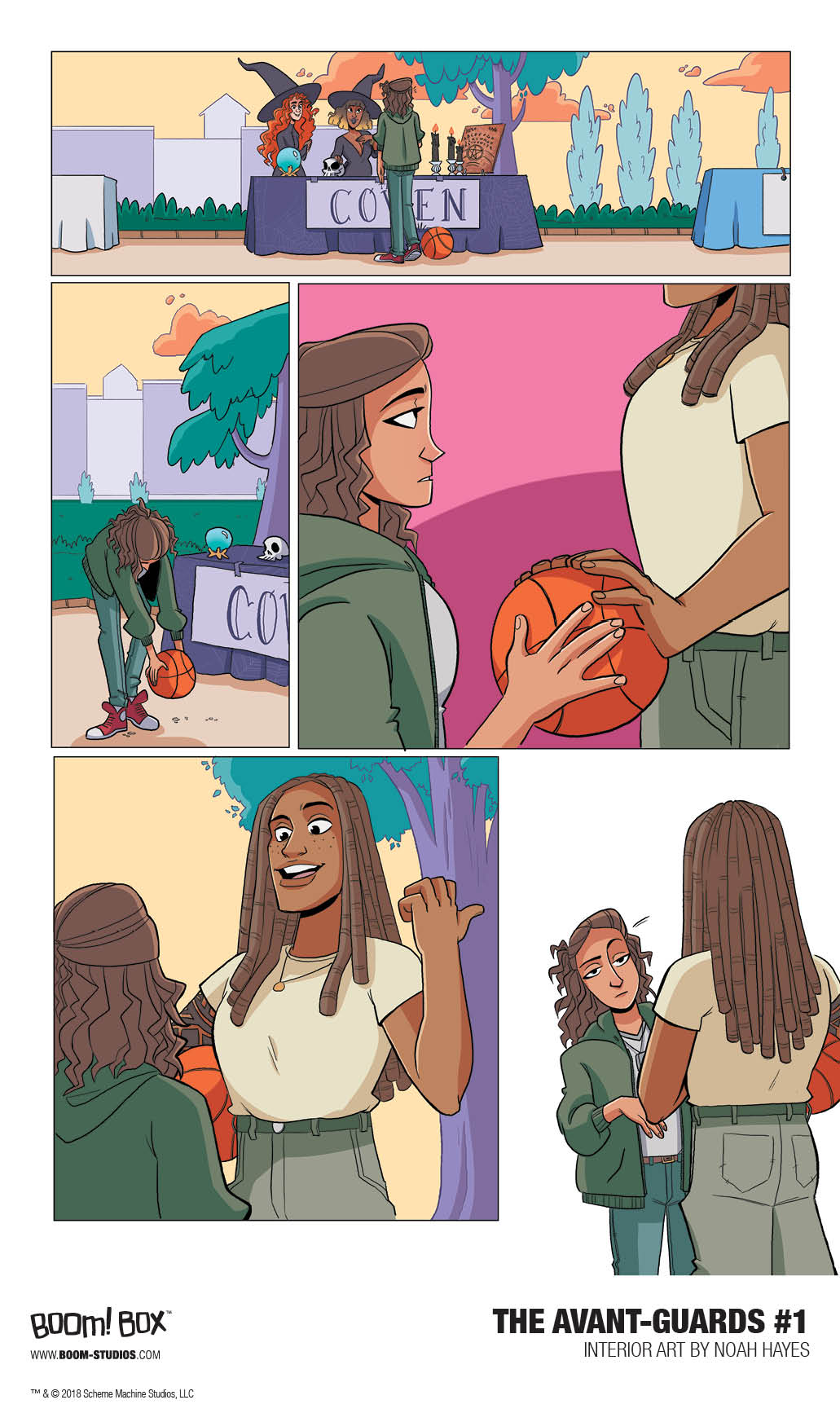 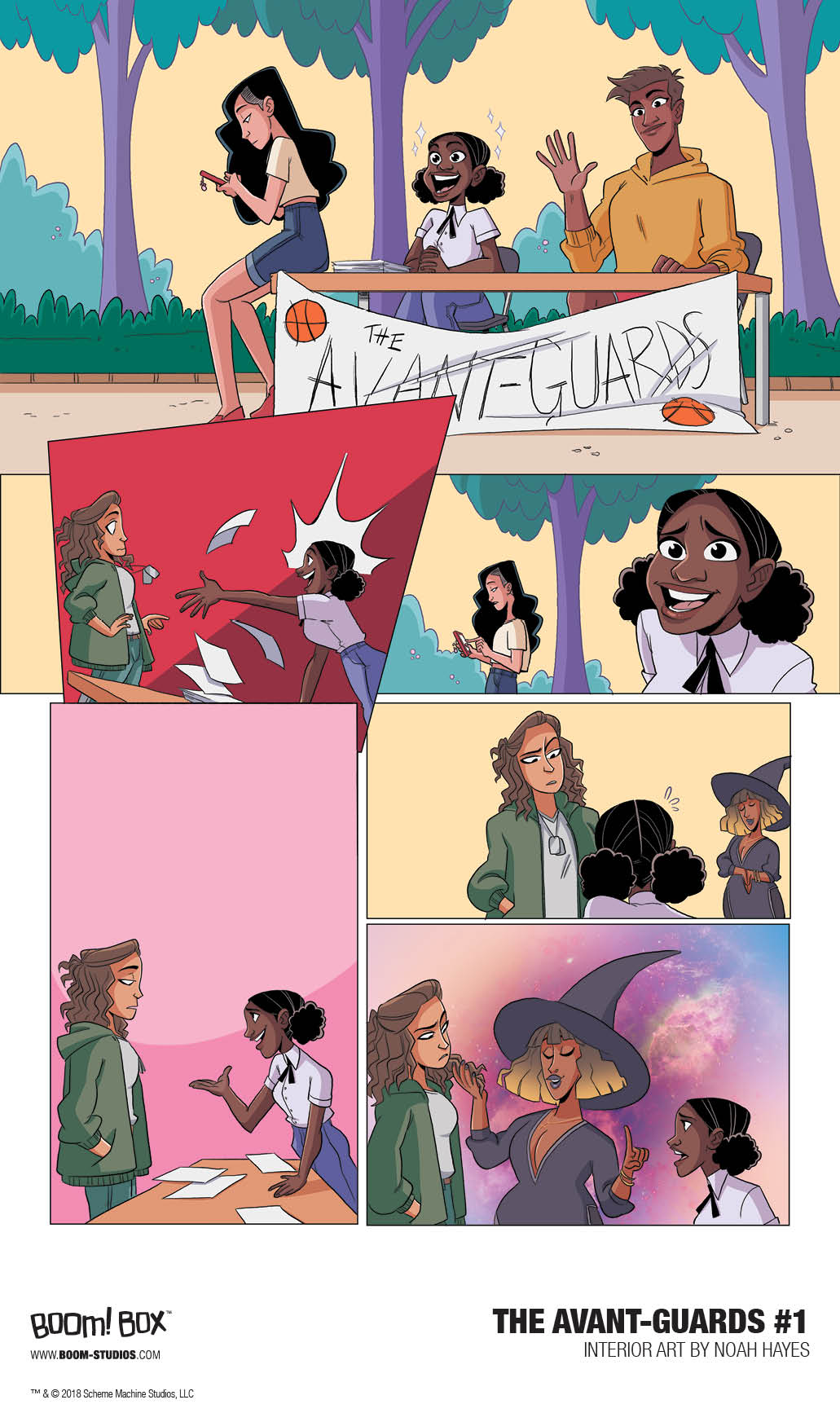