Can Steven Universe Find His Harmony?

Discover The Quest To Save The Earth in August 2018 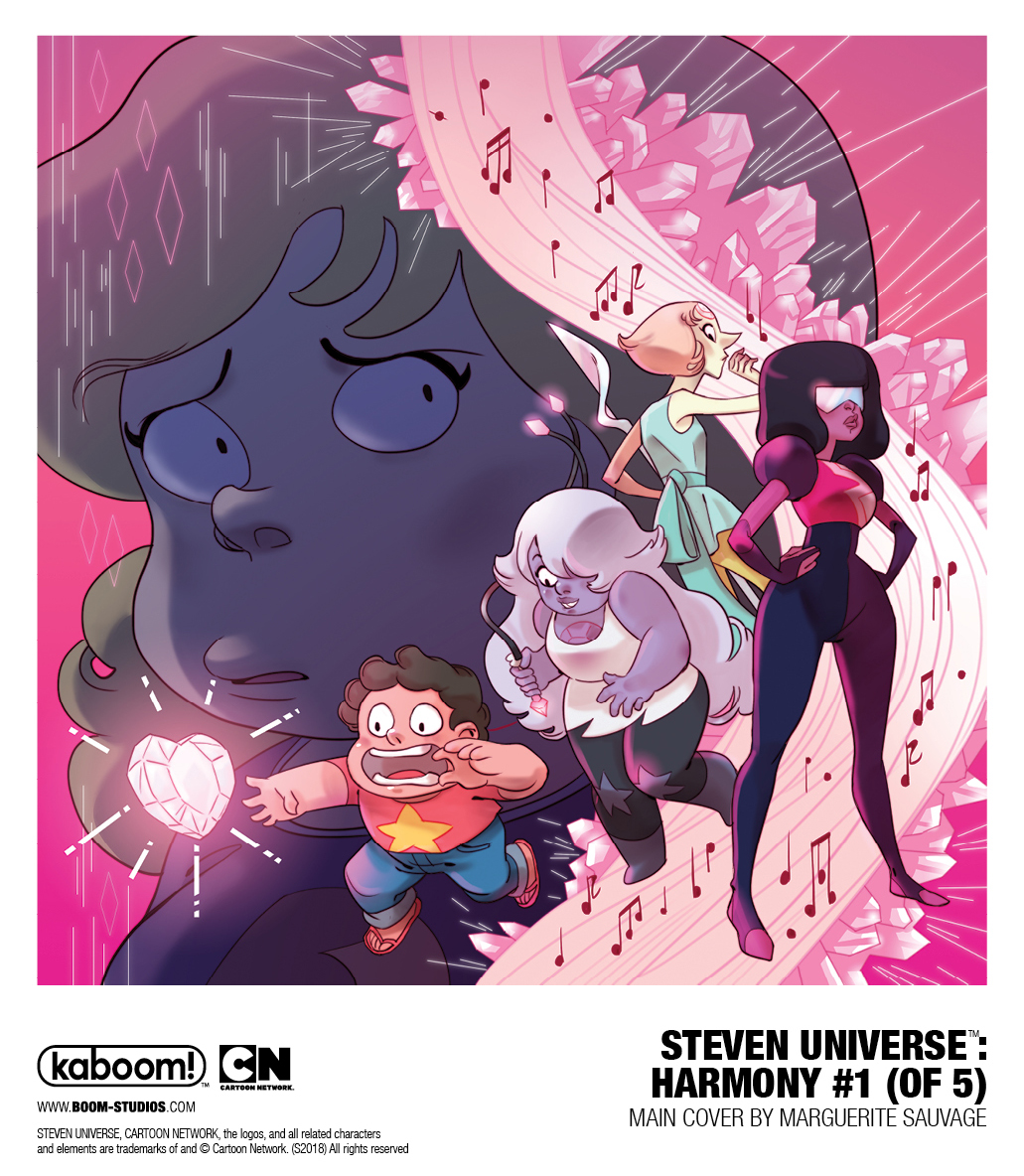 LOS ANGELES, CA (May 11, 2018) – BOOM! Studios and Cartoon Network announced STEVEN UNIVERSE: HARMONY #1, kicking off an all-new five limited series from writer S.M. Vidaurri (Iron) and artist Mollie Rose (Weeds) set in the world of the Emmy® Award-nominated Cartoon Network animated series Steven Universe. As Steven helps Sadie cope with quitting her job at the Big Donut and losing Lars, Steven and the Gems must work together to deactivate an old Diamond Authority artifact called the Harmony Core before it destroys Earth.

“STEVEN UNIVERSE: HARMONY was inspired by the beautiful world that Rebecca Sugar created, and the incredible music,” said S.M. Vidaurri. “I was in bands in middle school and high school, and I remember how high-stakes things felt. So when Sadie Killer and the Suspects was introduced, I was smitten. I wanted to write a story that balanced Steven’s gem related capers with his playing in a band. Because both feel like they could be the end of the world if something goes wrong.”

“I’ve been following Rebecca Sugar’s work for nearly a decade and Steven Universe since the beginning,” said Mollie Rose. “Rebecca’s work was really influential for me when I was a teen, especially her comics (I have a treasured copy of Pug Davis), so working on this is definitely a really cool opportunity. I’ve always admired Steven Universe‘s dedication to creating complex and diverse characters and worlds, and getting to be a part of that universe is really exciting!”

STEVEN UNIVERSE: HARMONY #1 features a main cover by Marguerite Sauvage (Faith), along with variant covers by Savanna Ganucheau (Lumberjanes) and Veronica Fish (SLAM!). Each issue will be formatted in a special 8”x8”.

“I’m really excited about this upcoming adventure in STEVEN UNIVERSE: HARMONY,” said Whitney Leopard, Editor, BOOM! Studios. “We have a chance to explore what is going on in Sadies’s life now that Lars is in space while Steven and the Crystal Gems have to deal with a dangerous artifact from the Gem War, something that is going to cause all the characters a lot of trouble. Shane brings a lot of heart to this story and Mollie’s art is going to make you wish this series was an ongoing.”

STEVEN UNIVERSE: HARMONY is the latest release from BOOM! Studios’ critically acclaimed KaBOOM! imprint, publisher of world-class licensed series such as Adventure Time, Over the Garden Wall, Peanuts, and Garfield, along with original series like Mega Princess by Kelly Thompson and  Brianne Drouhard, Brave Chef Brianna by Sam Sykes and Selina Espiritu and The Deep by Tom Taylor and James Brouwer.

Print copies of STEVEN UNIVERSE: HARMONY #1  will be available for sale at local comic book shops (use comicshoplocator.com to find the nearest one) in August 2018  or at the BOOM! Studios webstore. Digital copies can be purchased from content providers, including comiXology, iBooks, Google Play, and the BOOM! Studios app. 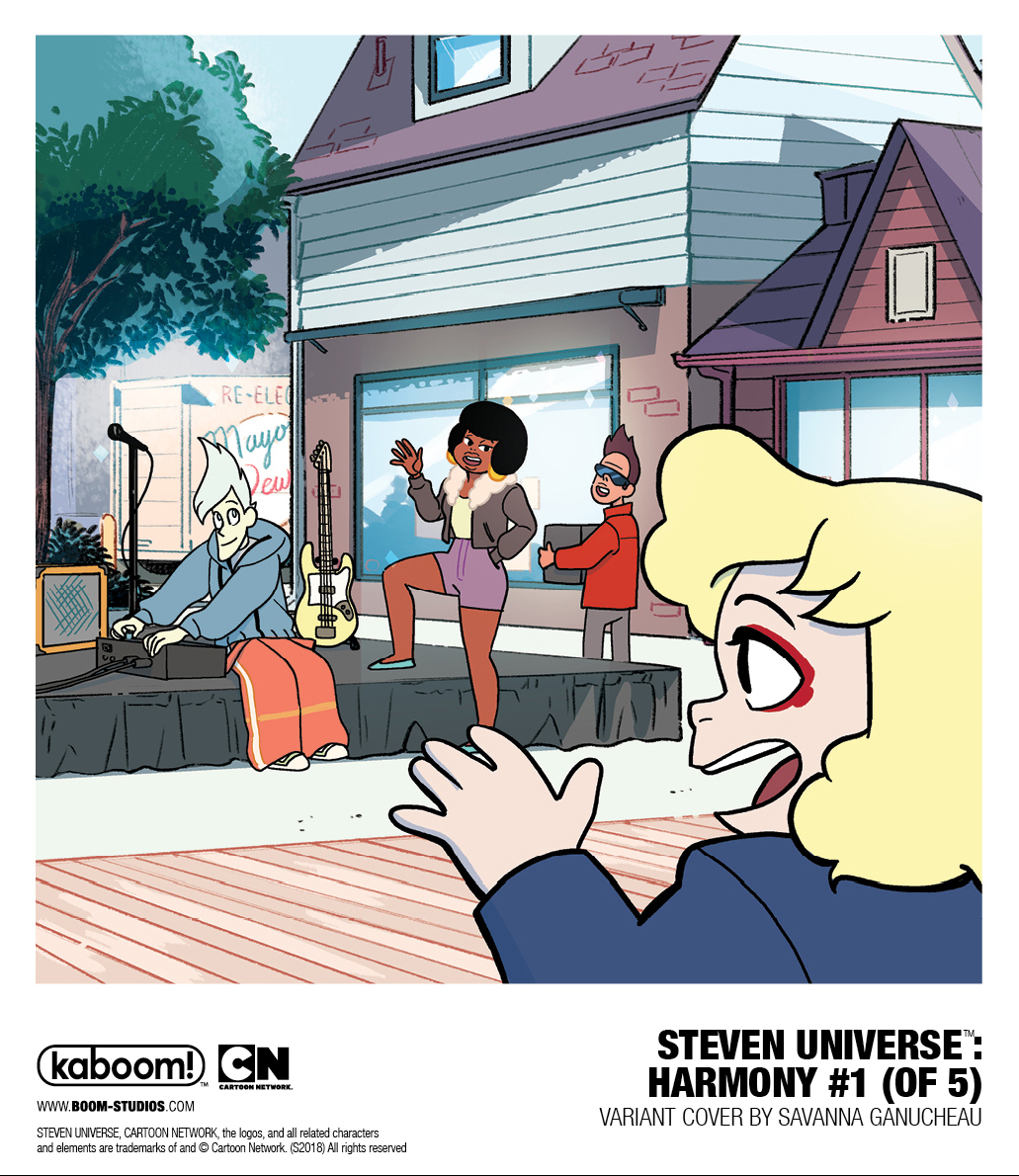