Buzz builds for RADICAL… and join the ORDER OF THE NIGHT JAY! 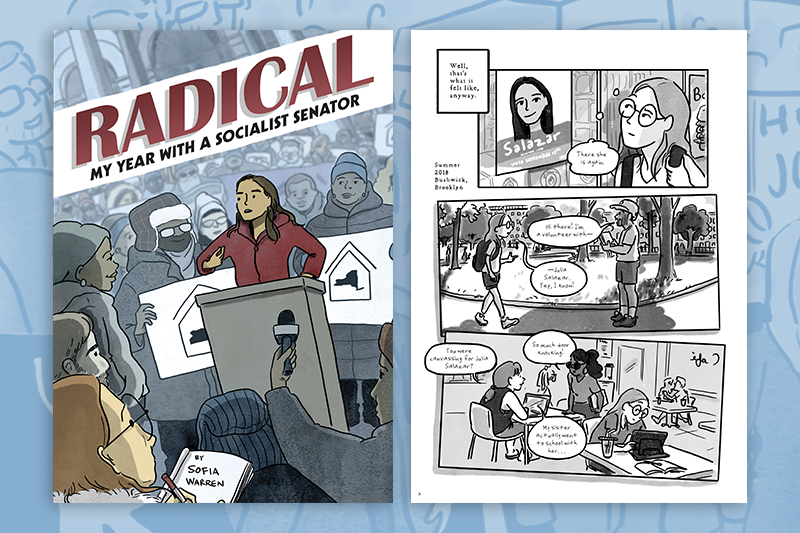 Praise for Radical: My Year with a Socialist Senator:

You won the election… Now what? Activist organizing meets government gridlock as a millennial New Yorker cartoonist follows a first-year state senator on her unforgettable journey from outsider to insider.

Radical: My Year with a Socialist Senator is a remarkable graphic memoir of Sofia Warren’s experience embedded with New York State Senator Julia Salazar and her staff during her first year in office. From candid conversations and eyewitness experiences, Warren builds a gripping and intimate portrait of a scrappy team of community organizers battling entrenched power structures, particularly to advance Julia’s marquee issue: housing rights.

At every key point during the year—setting up an office, navigating insider politics, public pushback, testy staff meetings, emotional speeches, protest marches, setbacks, and victories—Warren is up close and personal with Julia and her team, observing, questioning, and drawing as they try to translate their ideals into concrete legislation.

Along the way, Warren works toward answers to deeper questions: What makes a good leader? What does it mean to be a part of a community? Can democracy work? How can everyday people make change happen?

All these themes are explored—with nuance, compassion, and humor—in Sofia Warren’s remarkable debut.

Click here to listen in on Sofia’s chat with PW Comics World’s Editor, Calvin Reid, on the More to Come podcast.