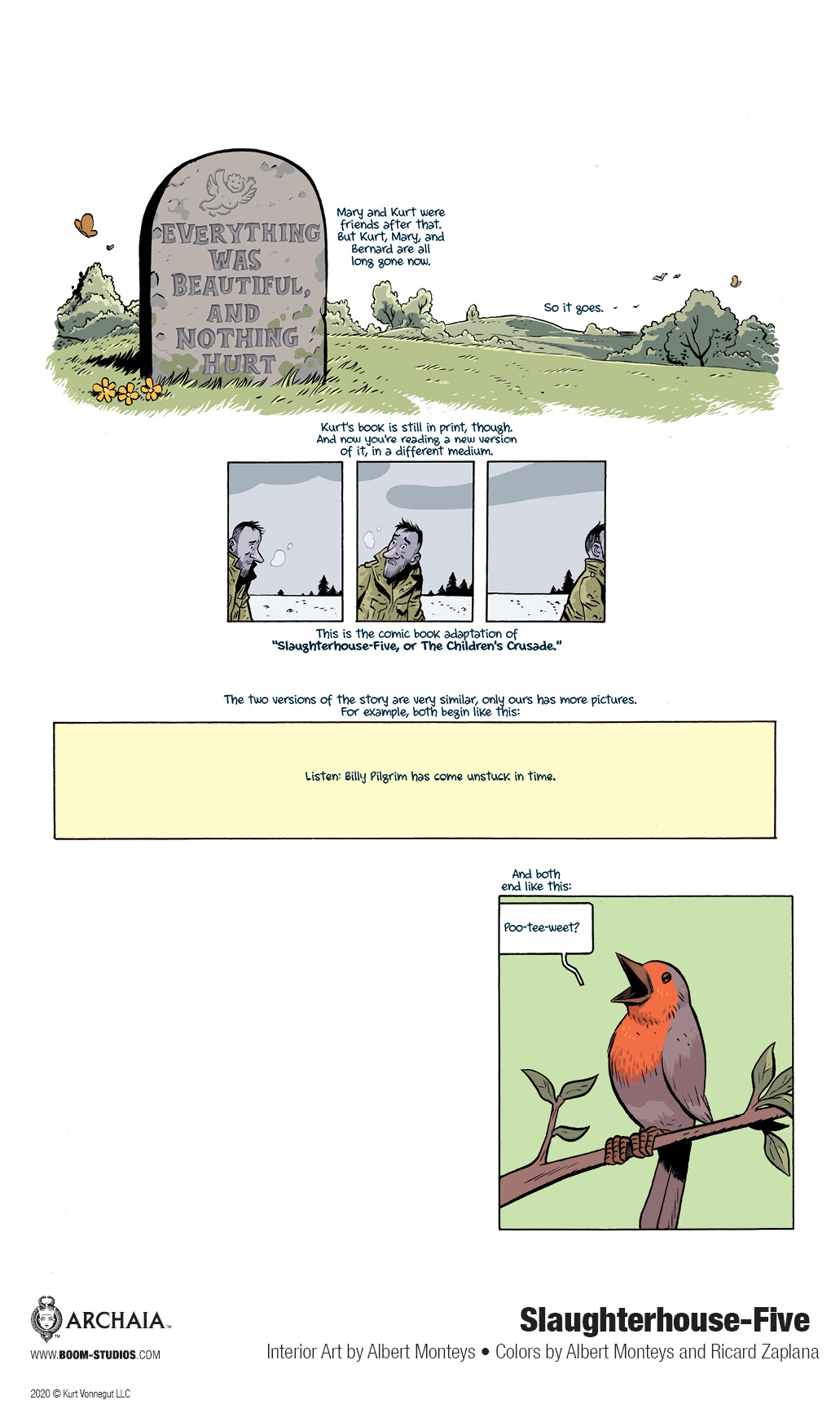 Billy Pilgrim’s journey is at once a farcical look at the horror and tragedy of war where children are placed on the frontlines and die (so it goes), and a moving examination of what it means to be fallibly human.

Kurt Vonnegut’s black humor, satiric voice, and incomparable imagination first captured America’s attention in The Sirens of Titan in 1959, and established him as “a true artist” (The New York Times) with Cat’s Cradle in 1963. He was, as Graham Greene declared, “one of the best living American writers.” Kurt Vonnegut died in 2007.

Ryan North is the writer responsible for Dinosaur Comics, the Eisner and Harvey Award-winning Adventure Time comic book series for BOOM! Studios, the bestselling anthology series Machine of Death and the New York Times bestselling and Eisner-Award winning Unbeatable Squirrel Girl series for Marvel Comics. North has also written a New York Times bestselling series of choose-your-own-adventure books based on Shakespeare’s classic plays Romeo and Juliet and Hamlet. His latest book, How to Invent Everything, is nothing less than a complete cheat sheet for civilization. North currently resides in Toronto, Canada.

“Like most people, Kurt Vonnegut has been one of my favourite writers since I first read his books decades ago, and it’s been such an honour—and challenge—to adapt his most famous work for a new medium. Slaughterhouse-Five is a deeply funny and deeply moving book, and my goal with this project was to keep all of that, while still making something that feels at home in this medium,” said writer Ryan North. “I picture it as a window into an alternate universe where Kurt (and Kilgore Trout) worked in comics instead of prose. Every medium can do things that others can’t, I’m beyond excited to share this new version of Slaughterhouse-Five with you very soon.”

Albert Monteys is a Spanish graphic novelist and illustrator, best known for his work in El Jueves, a weekly satirical magazine that he directed from 2006 until 2011. Monteys also created the series Carlitos Fax for the children’s magazine Mister K. In 2014, he founded a satirical monthly publication Orgullo y Satisfaccion (Pride and Satisfaction) with several other cartoonists, and began to publish a science fiction comic, ¡Universo! (Universe!) in Panel Syndicate, winning a 2017 Eisner Award nomination for Best Digital Comic.

“What a challenge, what an opportunity! When I was presented with the chance to collaborate in the graphic novel adaptation of Slaughterhouse-Five my first reaction was ‘this is one of my favorite books and it can’t be adapted.’ That was until I read Ryan North’s script, nodding enthusiastically at every great idea, every moving moment, every scene that made me want to grab my pencil right away.” said artist Albert Monteys. “A good adaptation shines new light on the original, I hope we managed to do just that. I think we did, somewhat, in the telegraphic schizophrenic manner of tales of the planet Tralfamadore—which is what comics are, after all.”

SLAUGHTERHOUSE-FIVE is the latest release from BOOM! Studios’ award-winning Archaia imprint, home to inspiring graphic novels such as Big Black: Stand at Attica by Frank “Big Black” Smith, Jared Reinmuth, and Ameziane, We Served the People by Emei Burell, The Realist by Asaf Hanuka, Girl on Film by Cecil Castellucci and Vicky Leta, Melissa Duffy, V. Gagnon & Jon Berg, New World by David Jesus Vignolli, About Betty’s Boob by Vero Cazot and Julie Rocheleau, Waves by Ingrid Chabbert and Carole Maurel, The Grand Abyss Hotel by Marcos Prior and David Rubín, and more.

“The trust and support shown by the Vonnegut family is gratifying for everyone who poured their hearts into ensuring we could best represent Kurt Vonnegut’s seminal work while creating something new in the graphic novel space,” said Sierra Hahn, Executive Editor, BOOM! Studios. “We believe we’ve created a gateway book for new Vonnegut readers and a book any longtime fan will admire and want on their shelves.”

Print copies of SLAUGHTERHOUSE-FIVE will be available for sale in September 2020 at local comic book shops (use comicshoplocator.com to find the nearest one), bookstores or at the BOOM! Studios webstore. Digital copies can be purchased from content providers, including comiXology, iBooks, Google Play, and Madefire.

For continuing news on SLAUGHTERHOUSE-FIVE and more from BOOM!, stay tuned to www.boom-studios.com and follow @boomstudios on Twitter. 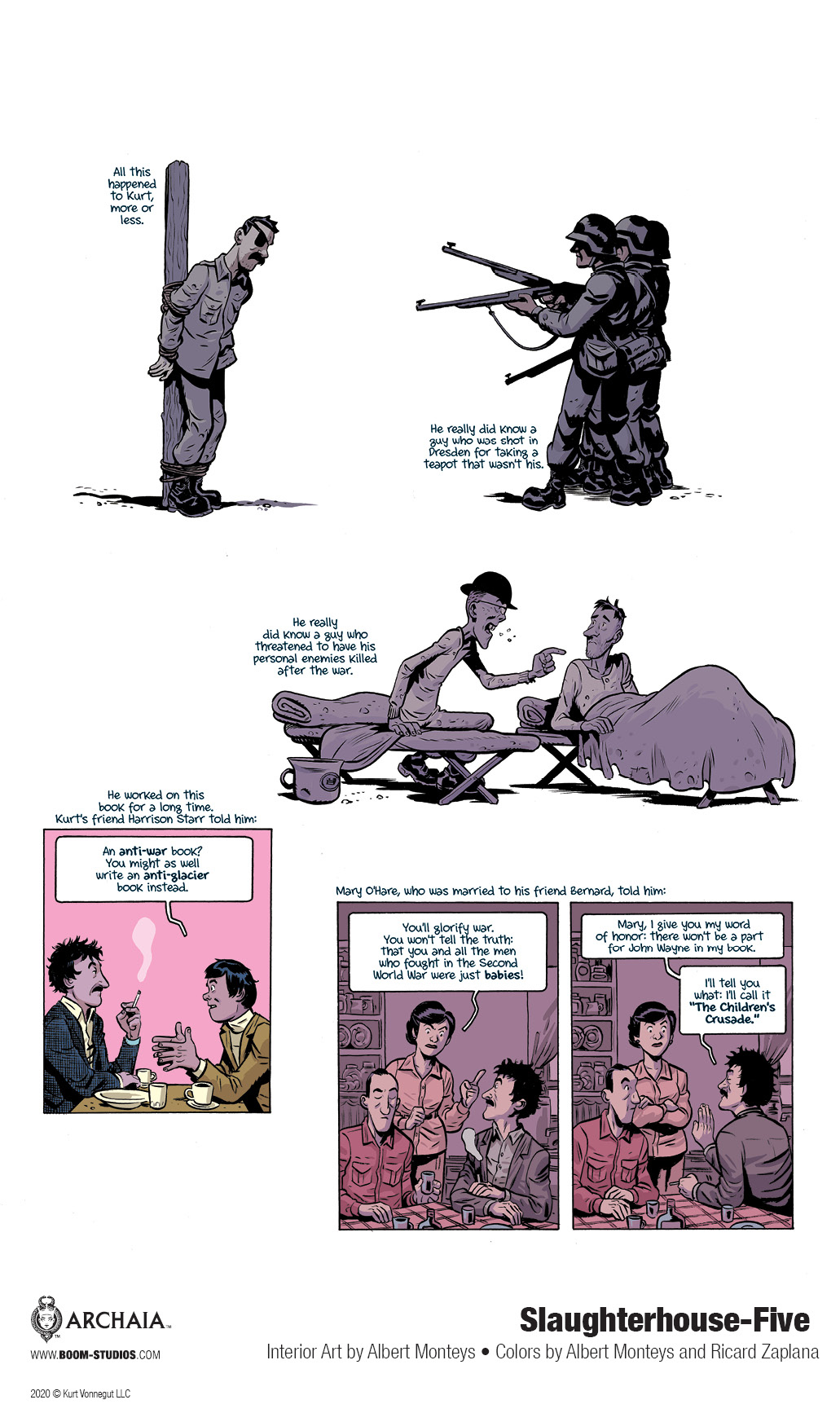 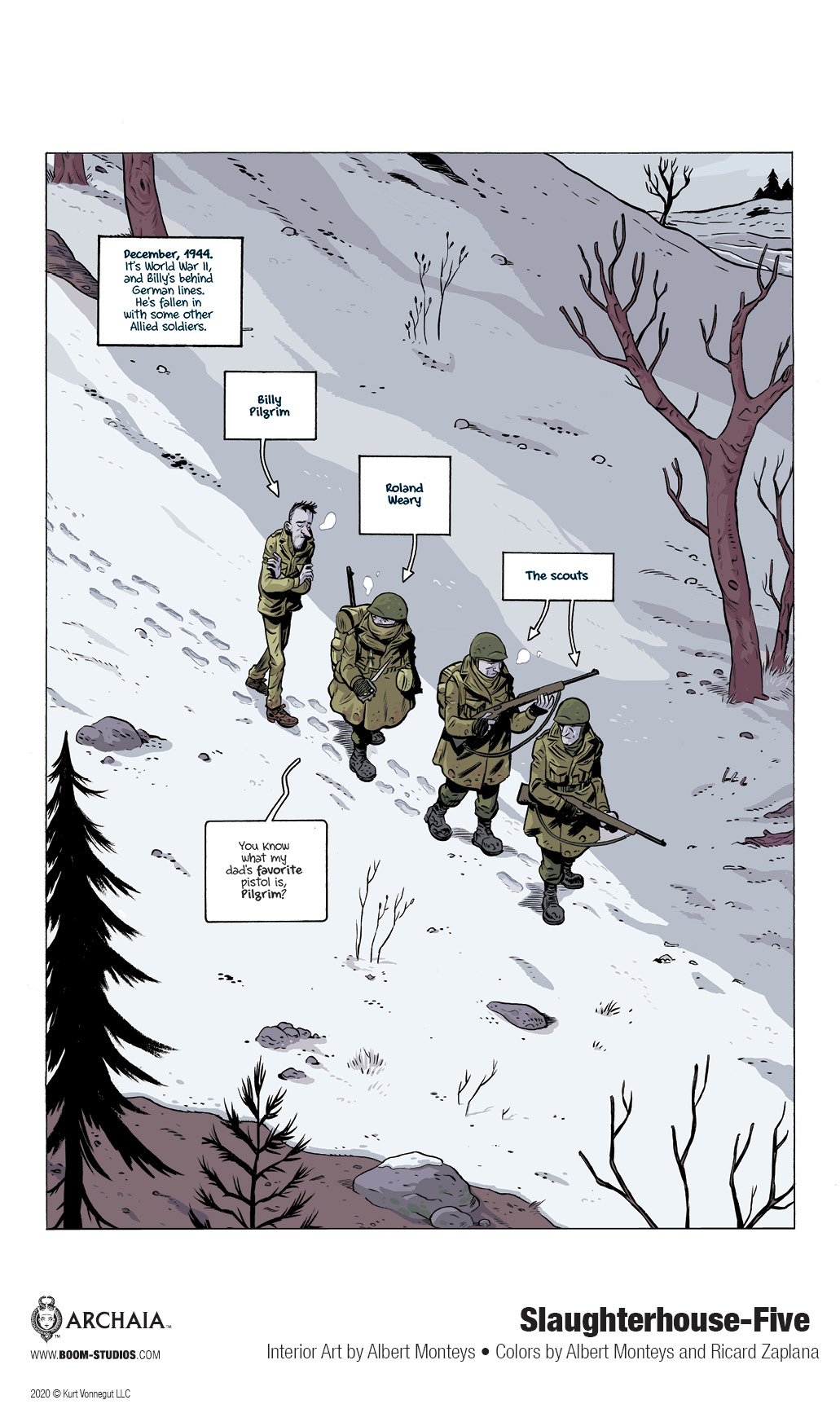 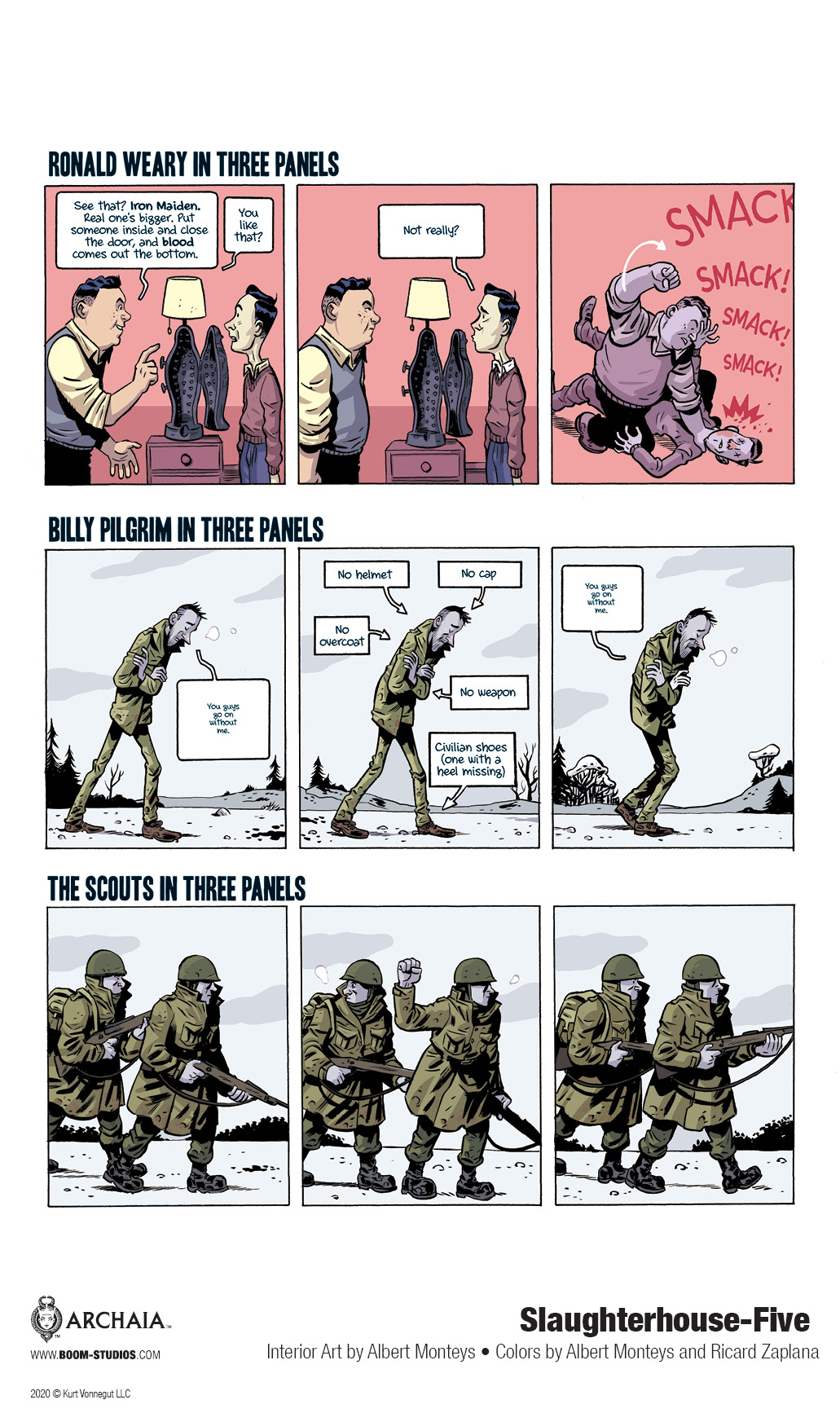 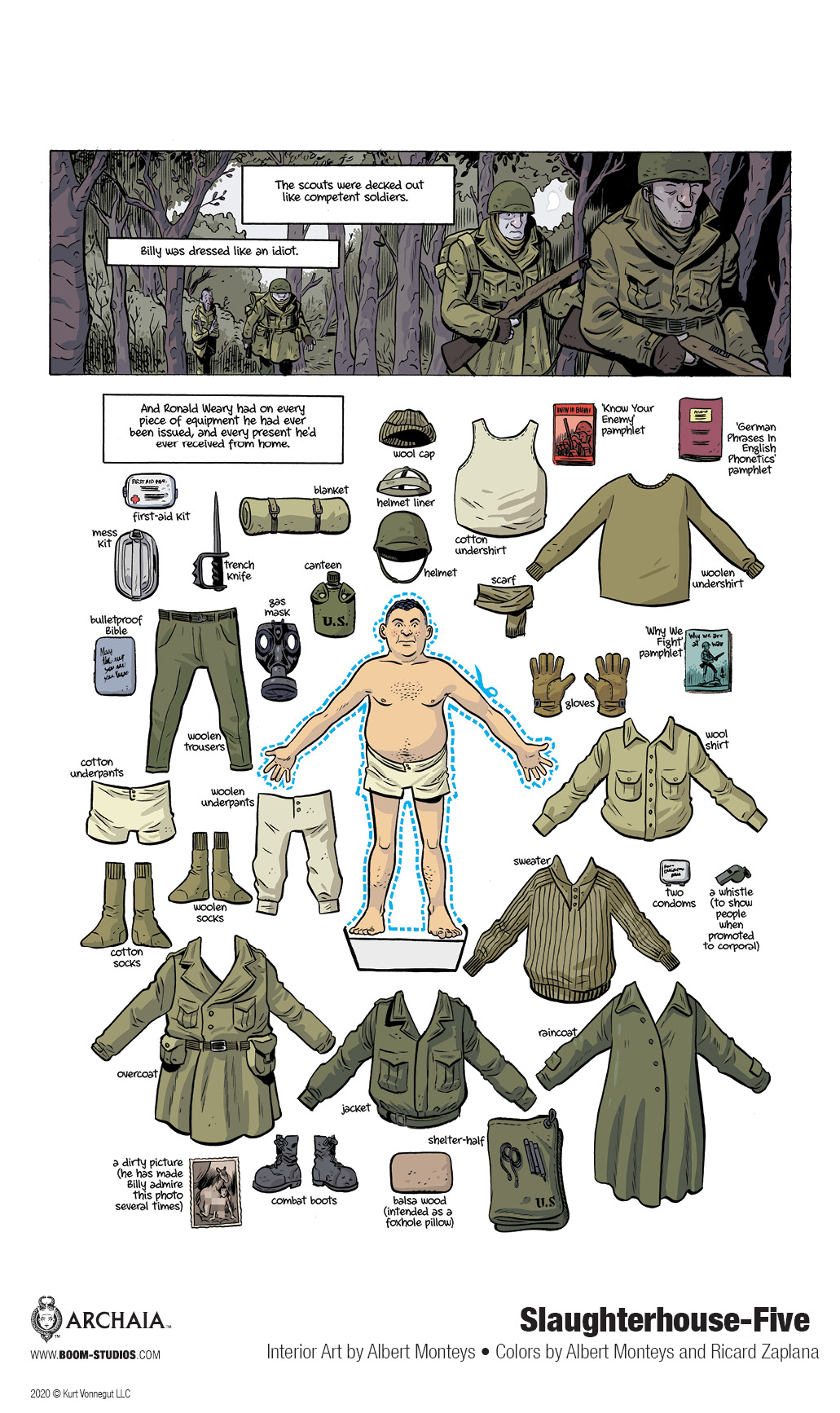 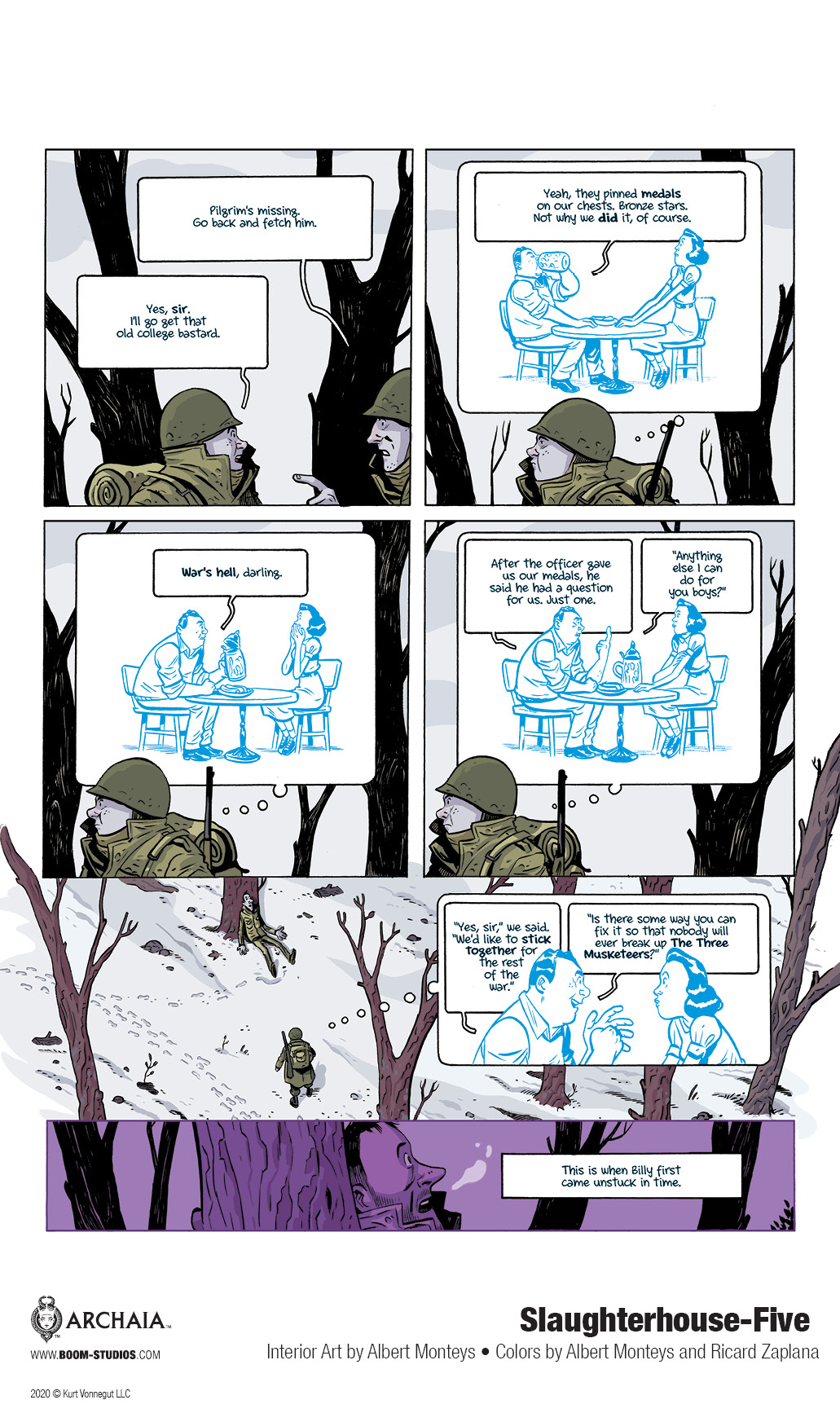 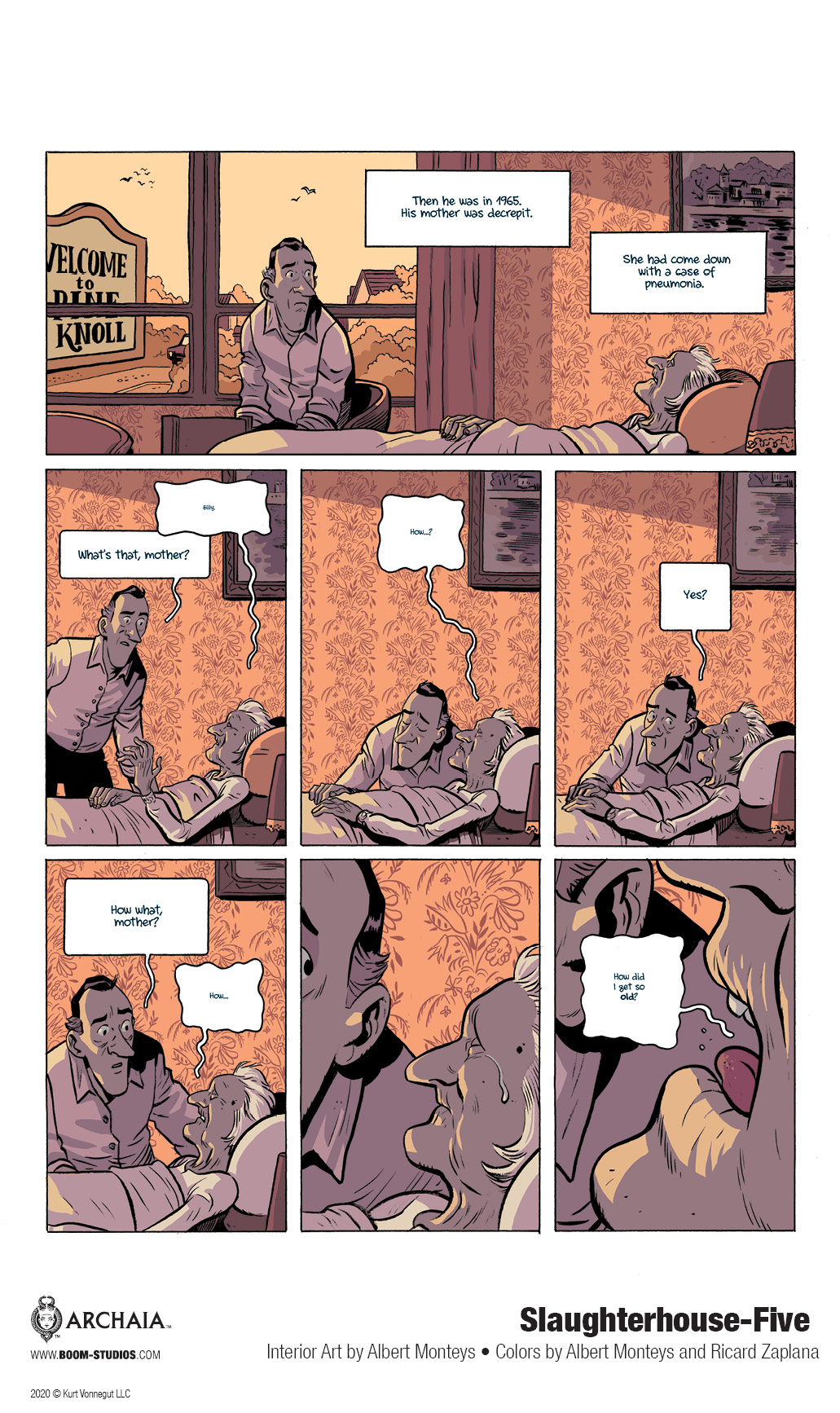