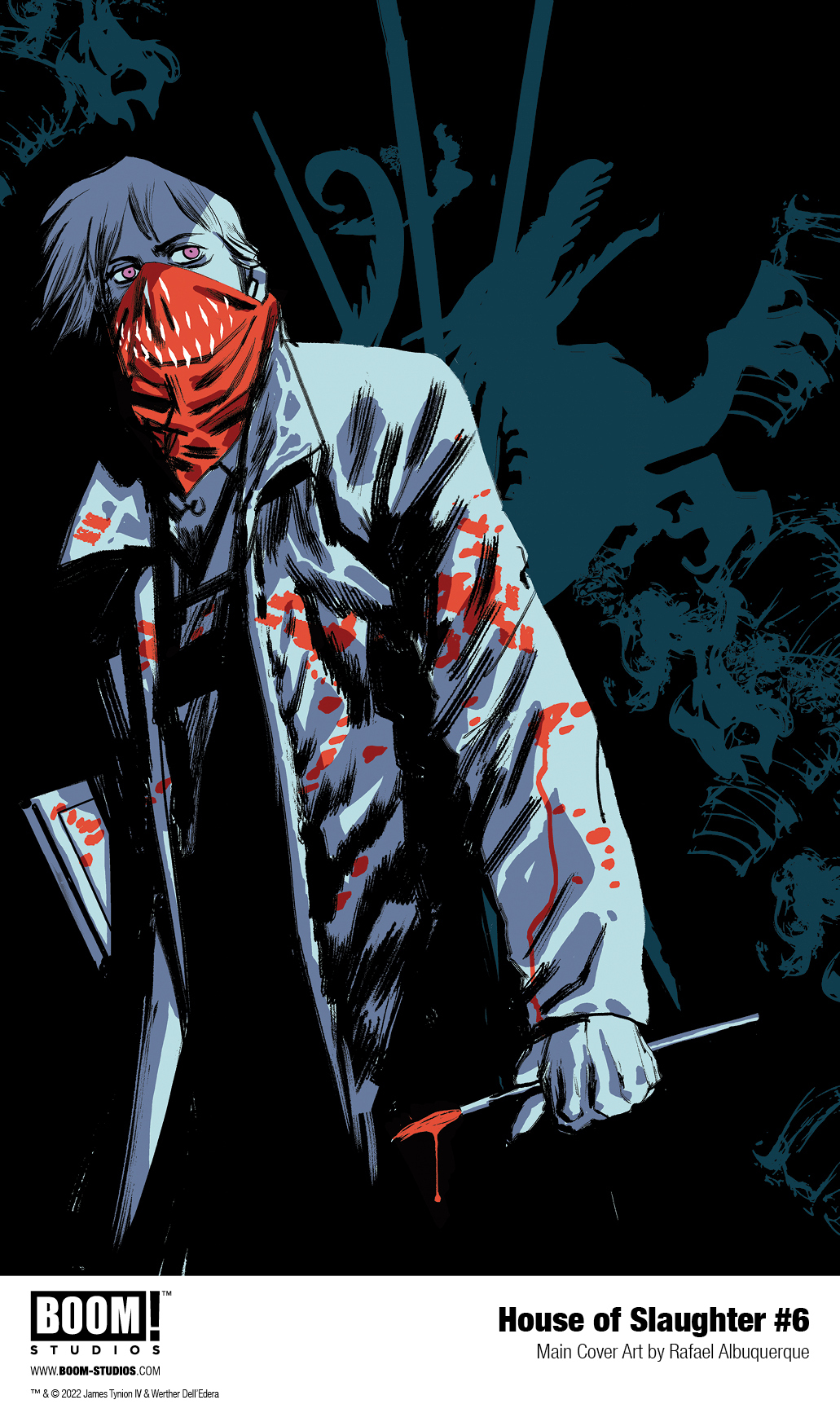 LOS ANGELES, CA (February 17, 2022) – BOOM! Studios today announced the launch of the next story within the bestselling horror anthology series, HOUSE OF SLAUGHTER, set in the world of the Eisner Award-nominated SOMETHING IS KILLING THE CHILDREN. From co-creator James Tynion IV (The Department of Truth, The Nice House on the Lake) and new co-writer Sam Johns (Punchline, The Joker), with art by rising star artist Letizia Cadonici and co-creator Werther Dell’Edera (Razorblades), comes the premiere of the first issue of a new original story about the mysterious SCARLET MASKS in HOUSE OF SLAUGHTER #6, available May 2022.

Edwin Slaughter is a Scarlet Mask, one of the secret record keepers of the Order of St. George. He’s enamored with stories of ancient hunters, as well as those in his midst, but he only gets to write the stories and never live them himself. That is, until what starts out as standard reconnaissance for the Order turns Edwin’s world upside down—a legendary monster is discovered, one long thought extinct! It’s taken the lives of countless children, bringing Edwin into the field and into real danger for the very first time.

“When we decided to launch a supporting title to Something is Killing the Children, the goal was to create a series that could cycle through many stories in the mythology surrounding the HOUSE OF SLAUGHTER. The stories Werther and I would never get a chance to tell, but knew must be told!” said said Tynion IV. “Sam and Letizia introduce you to Edwin Slaughter, a member of the Scarlet Masks. There’s so much depth behind their blood red masks–I’m so excited for you to learn more about them, and Edwin in particular!

“Exploring the HOUSE OF SLAUGHTER, we got to know Aaron and Jace better. Now it’s Edwin’s turn and many new characters will join in,” said Dell’Edera. “The world of Something is Killing the Children continues to grow with a new creative team and brand new characters! How exciting!”

HOUSE OF SLAUGHTER is the newest release from BOOM! Studios’ eponymous imprint, home to critically acclaimed original series, including BRZRKR by Keanu Reeves, Matt Kindt, and Ron Garney; Something is Killing the Children by James Tynion IV and Werther Dell’Edera; Once & Future by Kieron Gillen and Dan Mora; We Only Find Them When They’re Dead by Al Ewing and Simone Di Meo; Seven Secrets by Tom Taylor and Daniele Di Nicuolo; The Many Deaths of Laila Starr by Ram V and Filipe Andrade; Eve by Victor LaValle and Jo Mi-Gyeong; Basilisk by Cullen Bunn and Jonas Scharf; Regarding the Matter of Oswald’s Body by Christopher Cantwell and Luca Casalanguida, Faithless by Brian Azzarello and Maria Llovet; and the upcoming Alice Ever After by Dan Panosian and Giorgio Spalletta and Grim by Stephanie Phillips and Flaviano. The imprint also publishes popular licensed properties, including Dune: House Atreides from Brian Herbert, Kevin J. Anderson, and Dev Pramanik; Mighty Morphin and Power Rangers from Ryan Parrott, Marco Renna, and Francesco Mortarino; and Magic from Jed McKay and Ig Guara.

“Exploring the HOUSE OF SLAUGHTER means revealing its occupant’s hidden modus operandi for dedicated readers of Something is Killing the Children, while at the same time offering a first glimpse down the private halls of the Scarlet Masks,” said Johns. “Letizia Cadonici brings art to this book that is as beautiful as it is unsettling, an essential component to a story that asks how to defeat what–or who–is unafraid of death.”

Something is Killing the Children is the bestselling, Eisner Award-nominated hit series created by acclaimed comics writer James Tynion IV and illustrator Werther Dell’Edera. It has sold over one million copies worldwide, has been nominated for Eisner, Harvey, and Ringo Awards, and garnered widespread critical acclaim. As reported by The Hollywood Reporter, Netflix is developing a Something Is Killing The Children series with Intrepid Pictures’ Trevor Macy and Mike Flanagan (The Haunting of Hill House). Readers and fans can find the first three volumes collecting the first fifteen issues of the ongoing series in bookstores everywhere. Something is Killing the Children Book One Deluxe Edition is available now.

“As a huge fan of Something is Killing the Children, I still can’t believe I’m entering the HOUSE OF SLAUGHTER. I love horror, monsters, and anything that scares, so I really couldn’t ask for anything better!” said Cadonici.

Print copies of HOUSE OF SLAUGHTER #6 will be available for sale in May 2022 exclusively at local comic book shops (use comicshoplocator.com to find the nearest one) or at the BOOM! Studios webstore. Digital copies can be purchased from content providers, including comiXology, iBooks, Google Play, and Kindle. 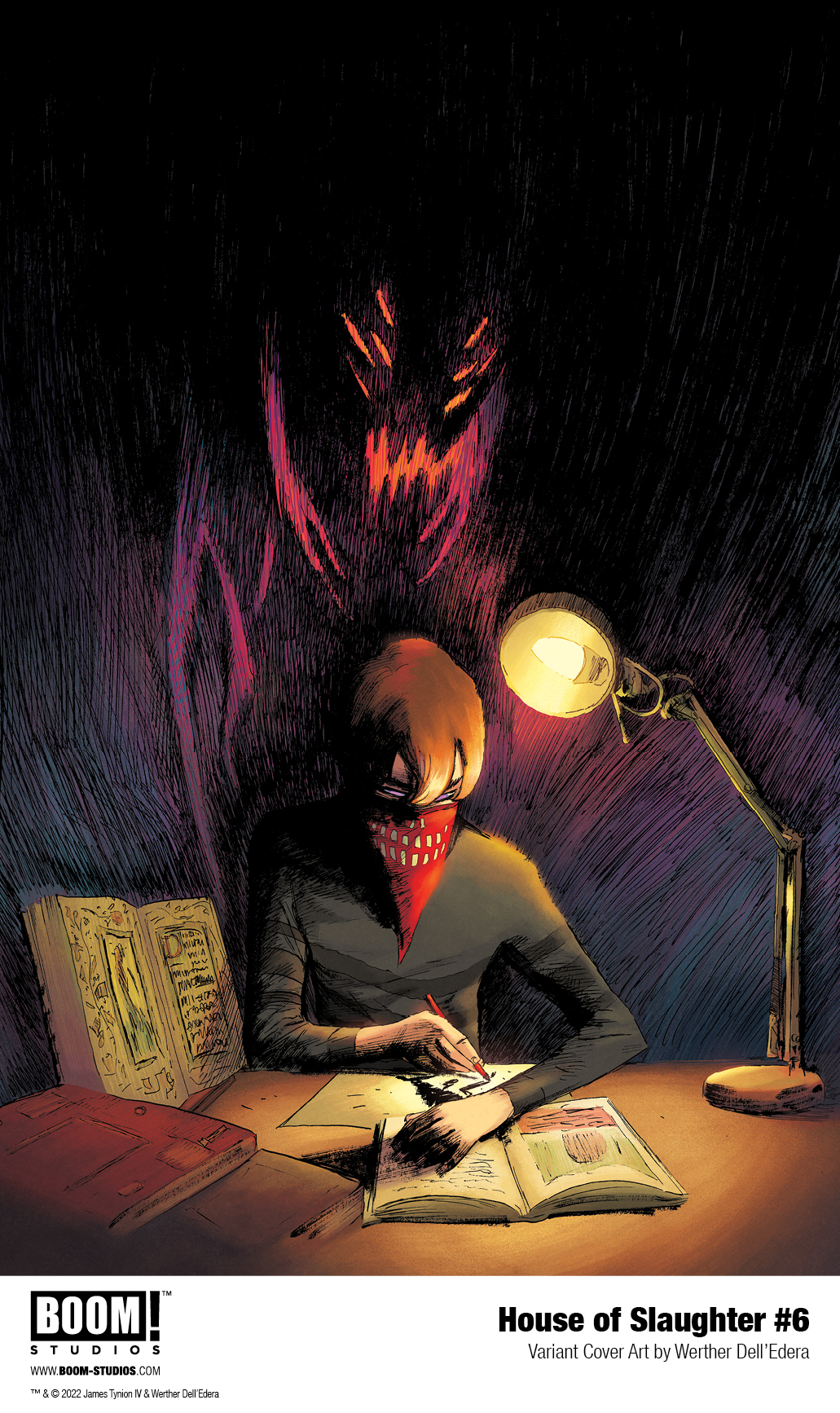 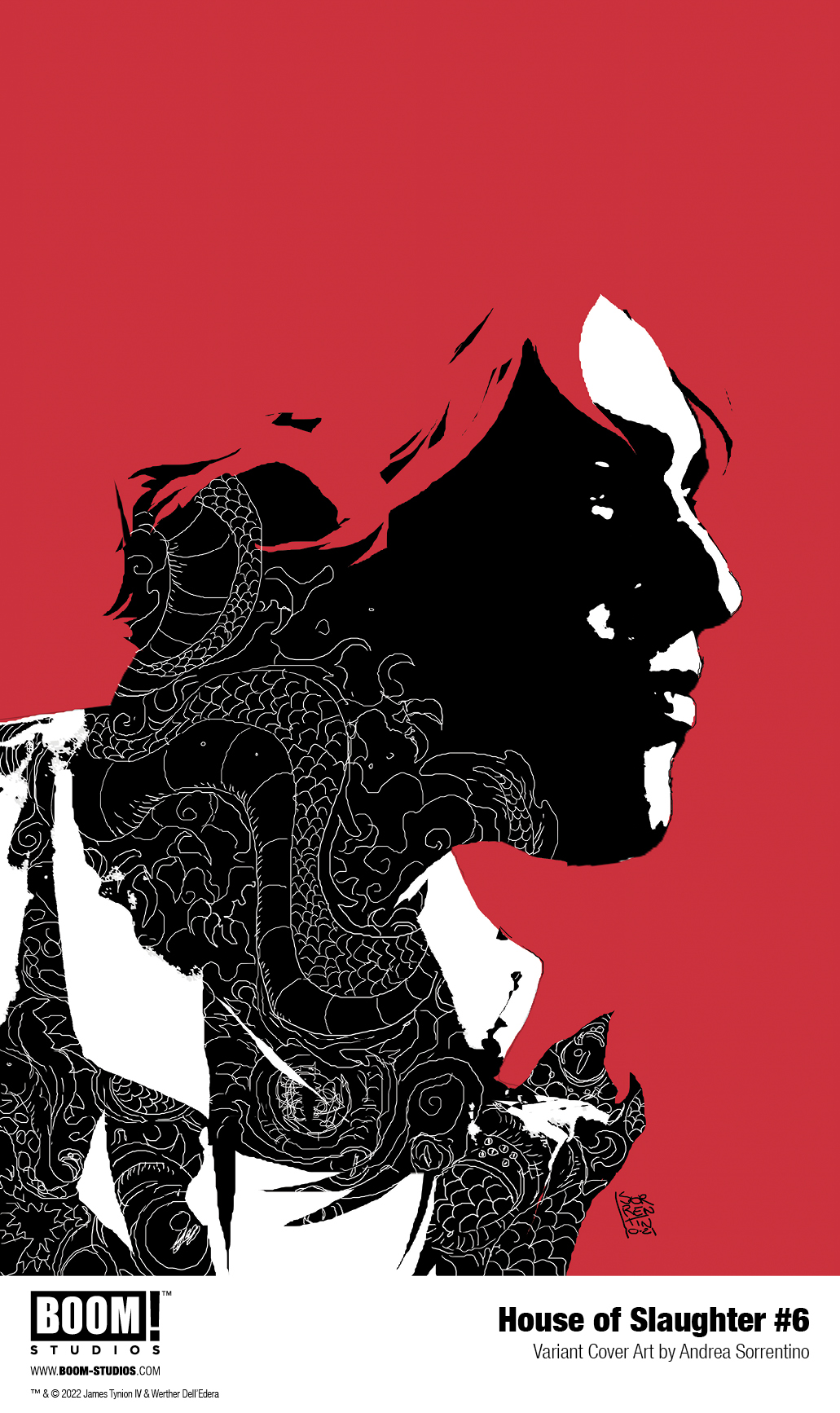