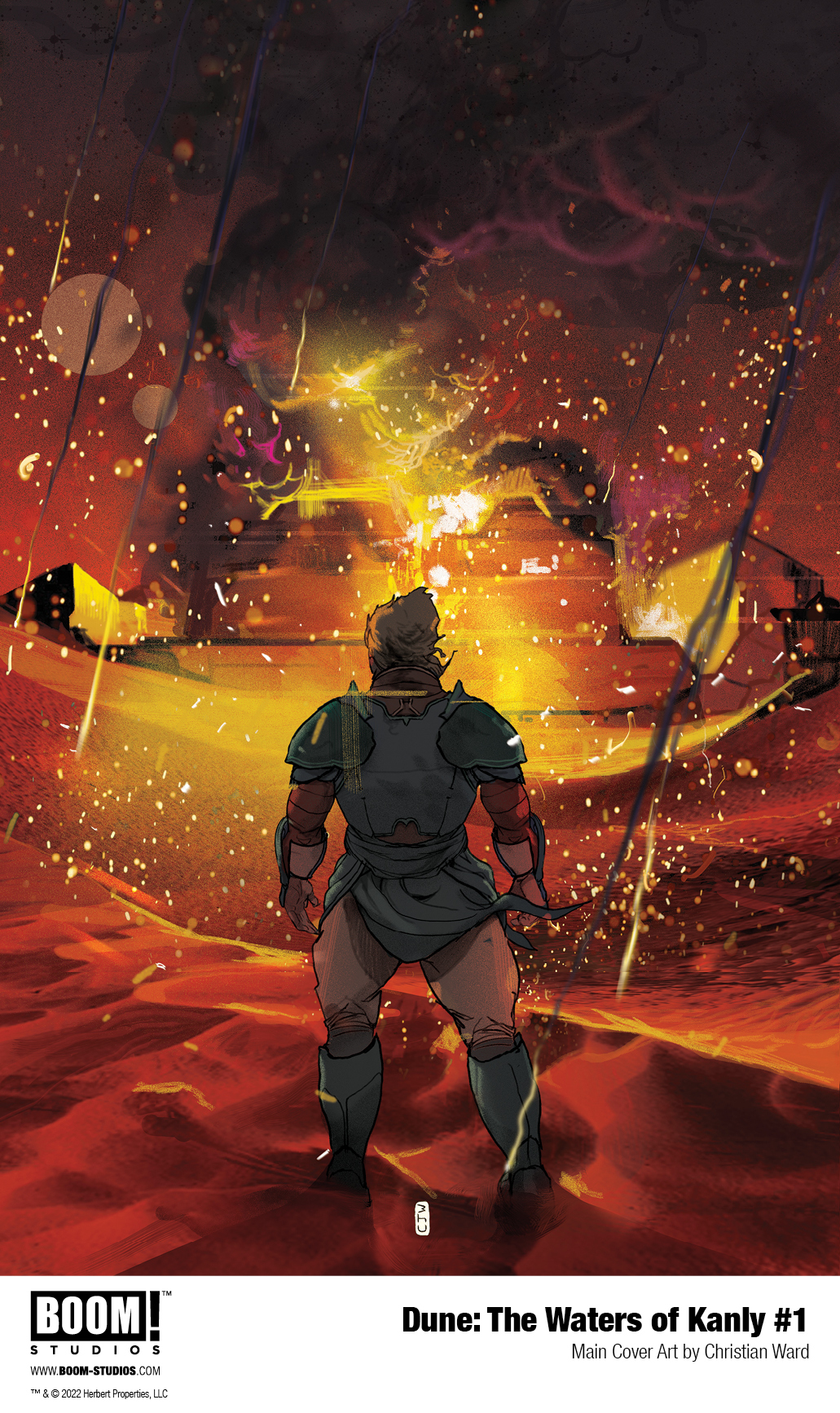 Go deeper into the Dune universe with this lore-expanding story set during the events of the Frank Herbert classic! In the aftermath of the battle of Arrakeen, legendary House Atreides warmaster Gurney Halleck takes refuge with spice smugglers, vowing revenge against the Harkonnens no matter the cost.

“In the novel DUNE, Gurney Halleck works secretly among the smugglers for two years, building his hatred toward the Harkonnens,” said Brian Herbert and Kevin J. Anderson. “We loved the opportunity to explore those lost years and tell this story of his plan to avenge what they did to noble House Atreides.”

Brian Herbert is the son of legendary science fiction author Frank Herbert and has written the definitive biography of him, Dreamer of Dune, a finalist for the Hugo Award. Brian has also written many highly imaginative novels, including the Timeweb trilogy, the ecological fantasy Ocean (with his wife, Jan), The Little Green Book of Chairman Rahma, The Unborn, and The Assassination of Billy Jeeling. His earlier acclaimed novels include The Stolen Gospels, Sudanna Sudanna, and Sidney’s Comet, as well as Man of Two Worlds (written with his father). Brian has collaborated on many novels in the Dune series with Kevin J. Anderson, all of which became international bestsellers, and they also wrote the Hellhole trilogy together. They recently completed the novel Dune: The Heir of Caladan for Tor, and are also collaborating on the definitive graphic novel adaption of the novel Dune, as well as an exciting new adaptation of their collaborative novel, Dune: House Atreides, for BOOM! Studios. Brian also co-manages the legacy of Frank Herbert and is an executive producer of the new motion picture “Dune” and the forthcoming TV series “Dune: The Sisterhood.” He and his wife live in Seattle, Washington.

Kevin J. Anderson has published more than 175 books, 58 of which have been national or international bestsellers. He has written numerous novels in the Star Wars, X-Files, and Dune universes, as well as unique steampunk fantasy trilogy beginning with Clockwork Angels, written with legendary rock drummer Neil Peart. His original works include the Saga of Seven Suns series, the Wake the Dragon and Terra Incognita fantasy trilogies, the Saga of Shadows trilogy, and his humorous horror series featuring Dan Shamble, Zombie P.I. He has edited  numerous anthologies, written comics and games, and the lyrics to two rock CDs. Anderson is the director of the graduate program in Publishing at Western Colorado University. Anderson and his wife Rebecca Moesta are the publishers of WordFire Press. His most recent novels are Clockwork Destiny, Gods and Dragons, Dune: The Heir of Caladan (with Brian Herbert), and Slushpile Memories: How NOT to Get Rejected.

“Brian and Kevin have done it again with an in-depth look at one of the most intriguing characters in the Dune universe—Gurney Halleck—and the incredible never-before-seen journey he undertook to get justice for the House he devoted his life to,” said Dafna Pleban, Senior Editor, BOOM! Studios.

DUNE: THE WATERS OF KANLY is the newest release from BOOM! Studios’ eponymous imprint, home to critically acclaimed original series, including BRZRKR by Keanu Reeves, Matt Kindt, and Ron Garney; We Only Find Them When They’re Dead by Al Ewing and Simone Di Meo; Seven Secrets by Tom Taylor and Daniele Di Nicuolo; Something is Killing the Children by James Tynion IV and Werther Dell’Edera; Once & Future by Kieron Gillen and Dan Mora; The Many Deaths of Laila Starr by Ram V and Filipe Andrade; Proctor Valley Road by Grant Morrison, Alex Child, and Naomi Franquiz; and Eve by Victor LaValle and Jo Mi-Gyeong. The imprint also publishes popular licensed properties including Mighty Morphin and Power Rangers from Ryan Parrott, Marco Renna, and Francesco Mortarino; and Magic from Jed MacKay and Ig Guara.

Print copies of DUNE: THE WATERS OF KANLY #1 will be available in May 2022 at local comic book shops (use comicshoplocator.com to find the one nearest you), or at the BOOM! Studios webstore. Digital copies can be purchased from content providers like comiXology, iBooks, Google Play, and Kindle. 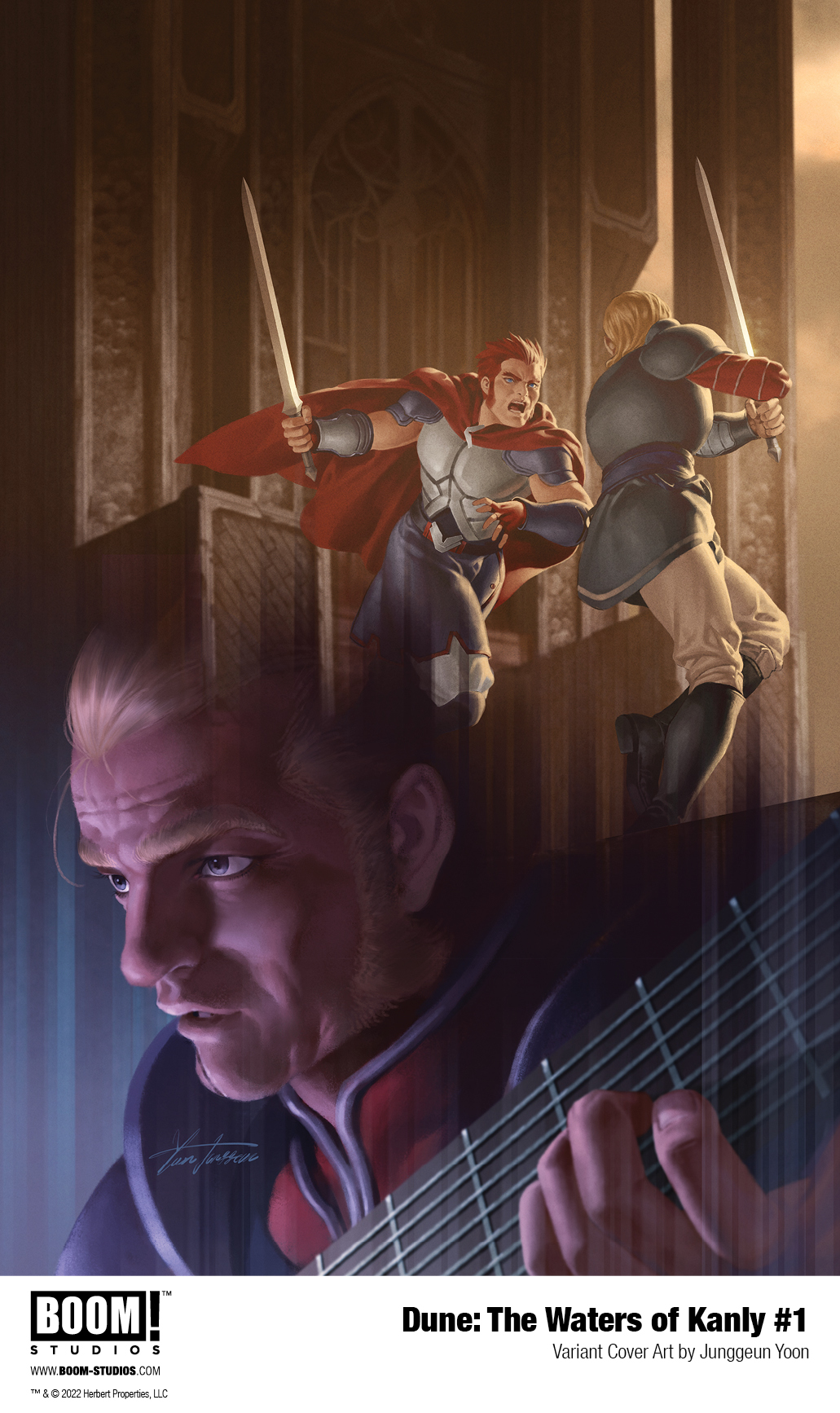 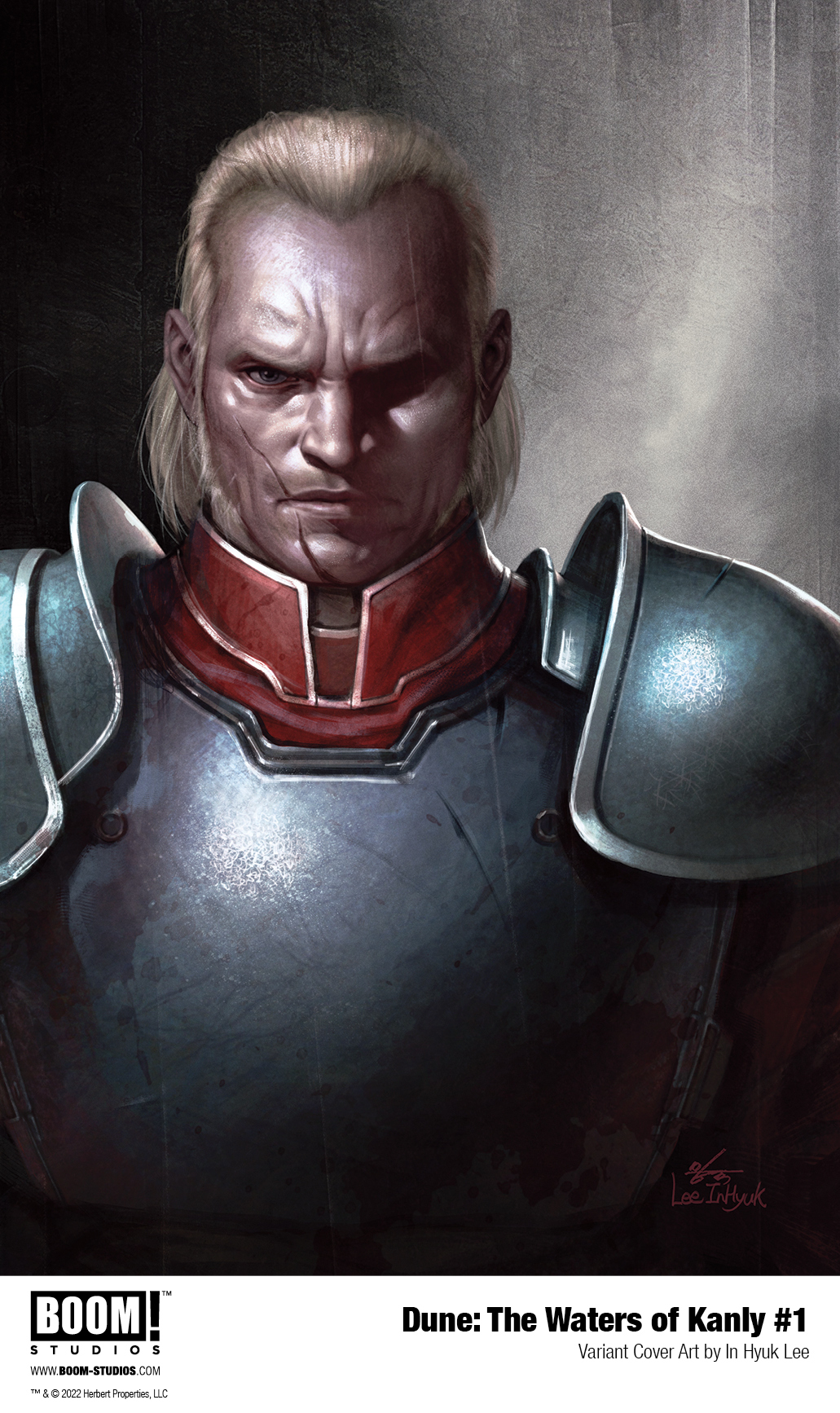 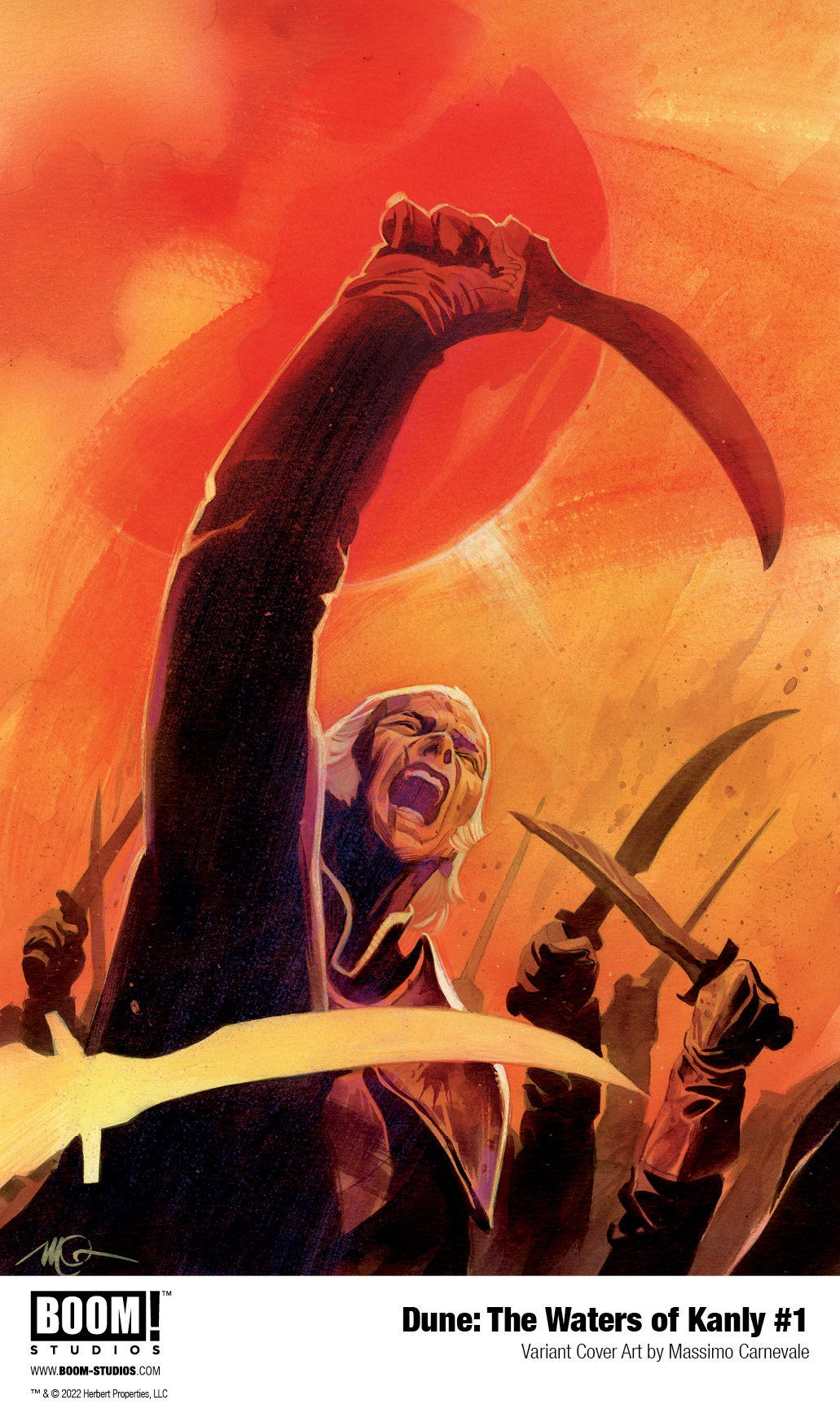 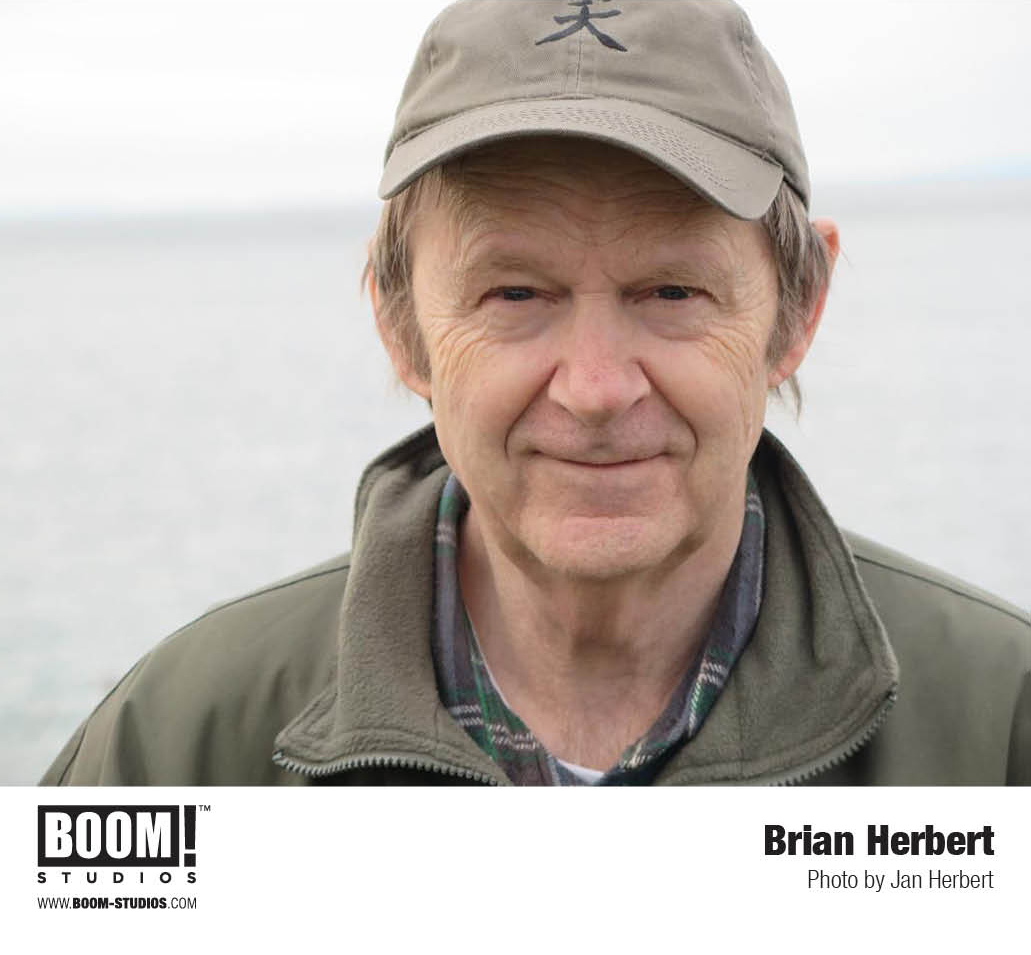 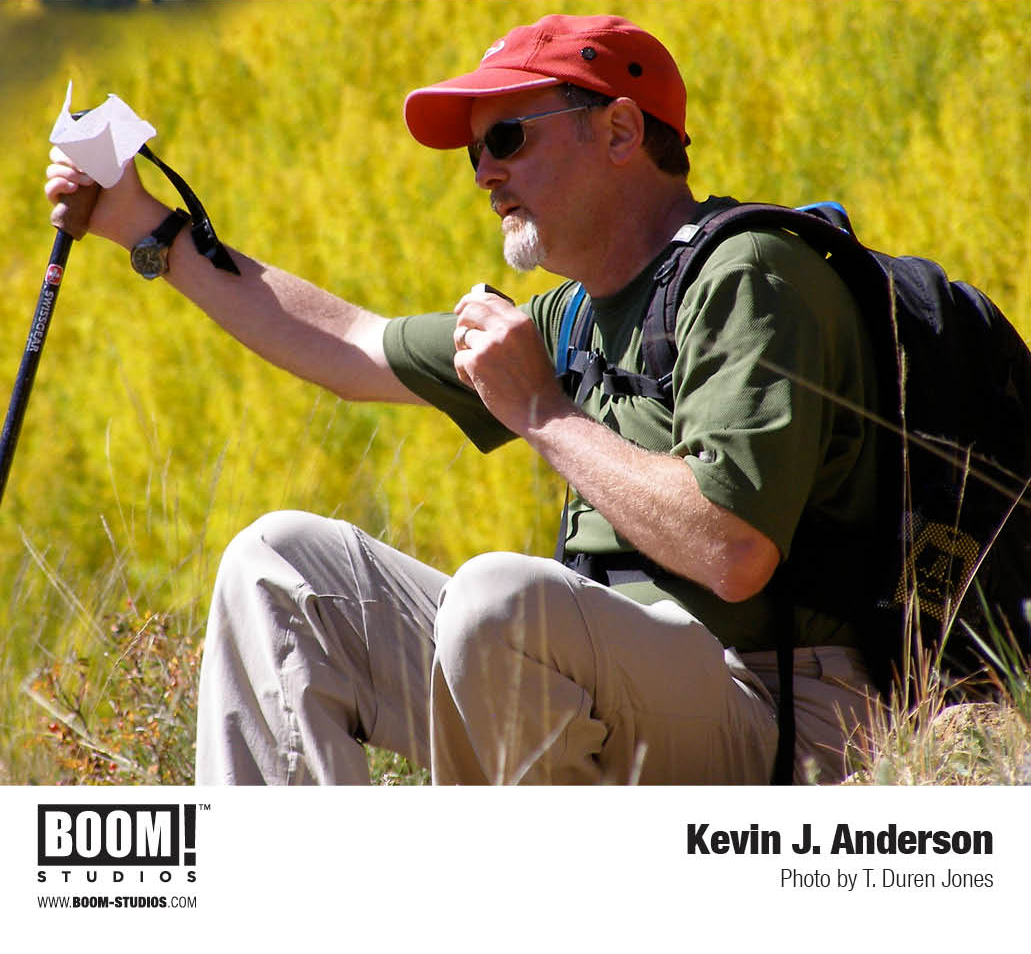