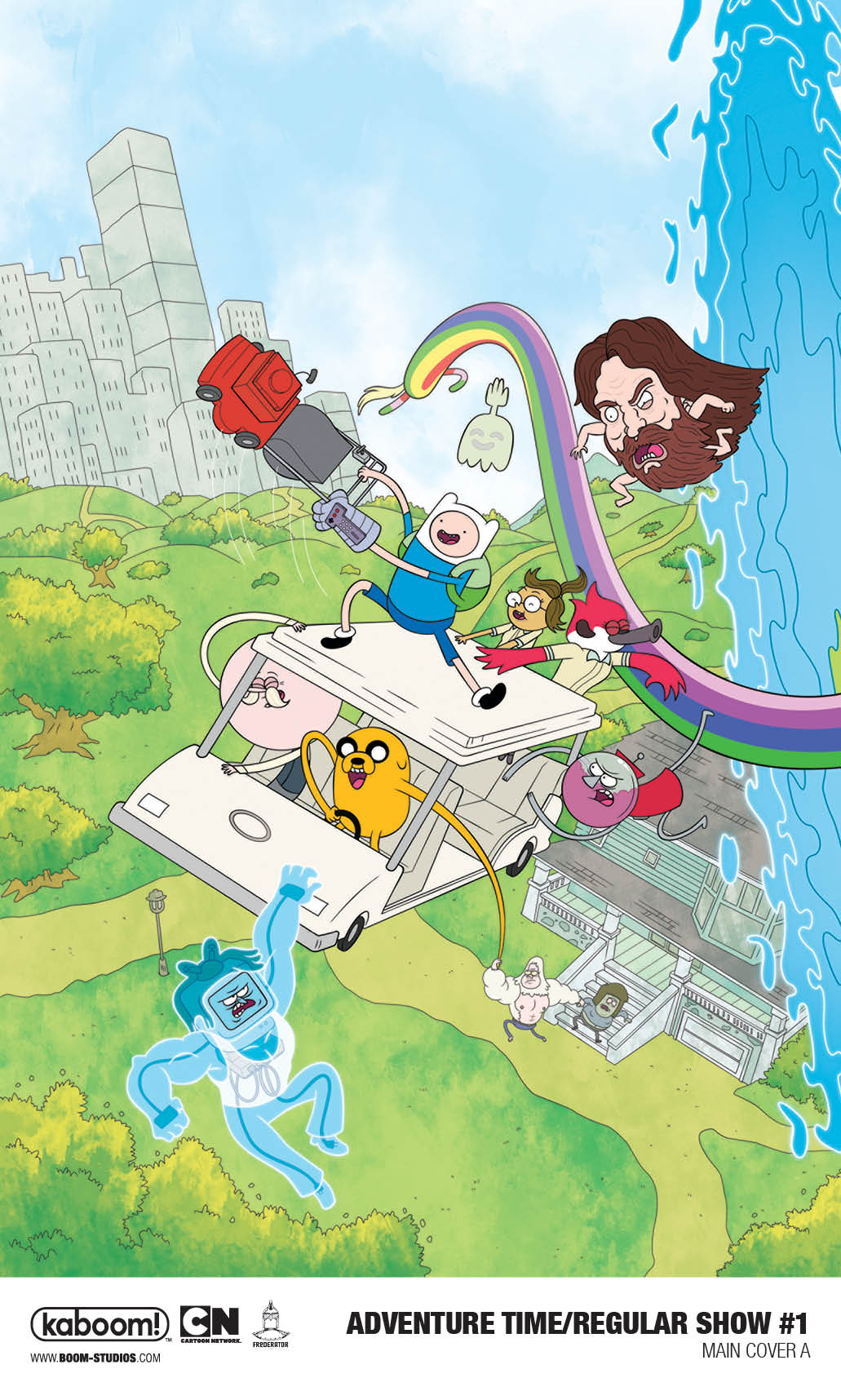 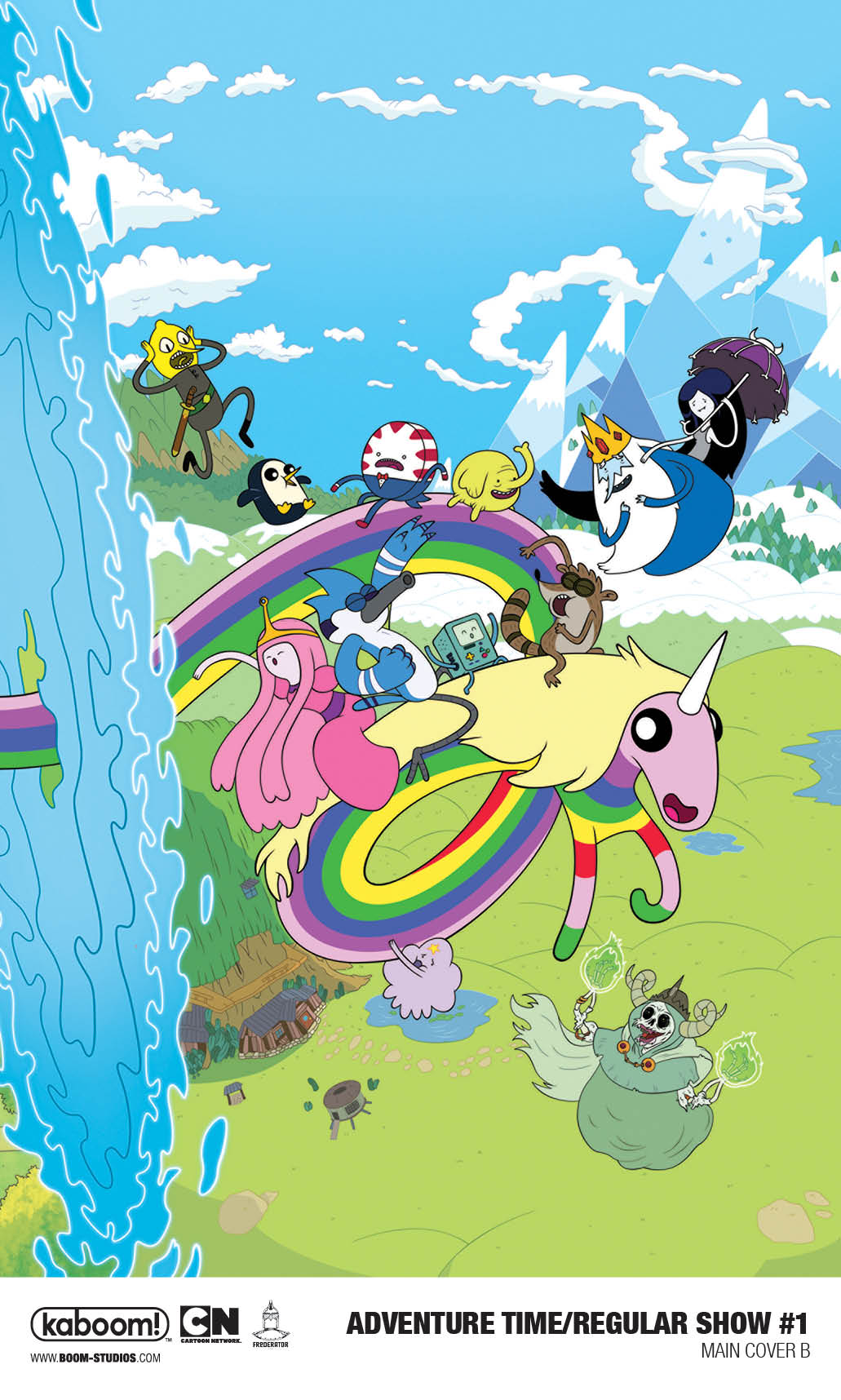 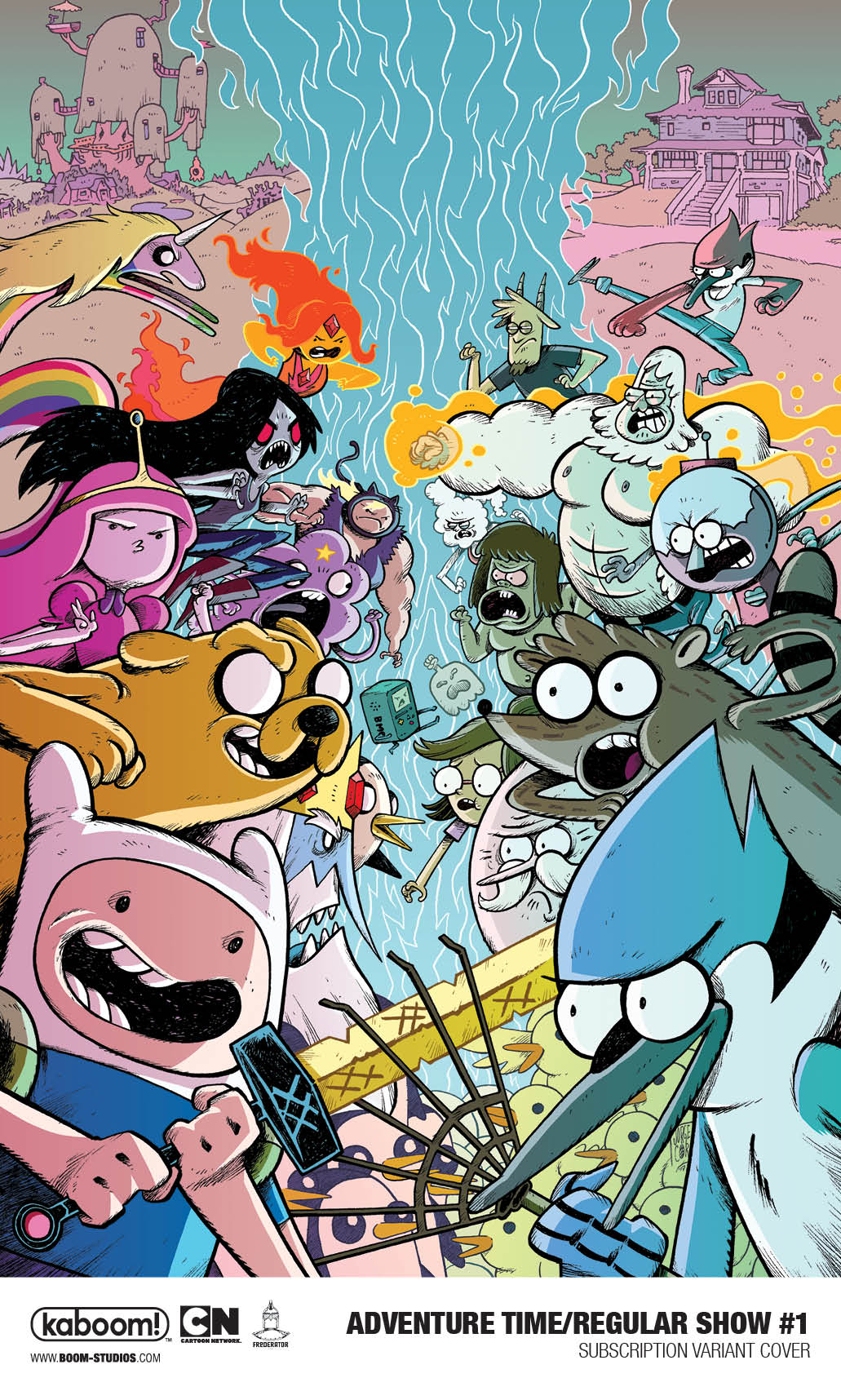 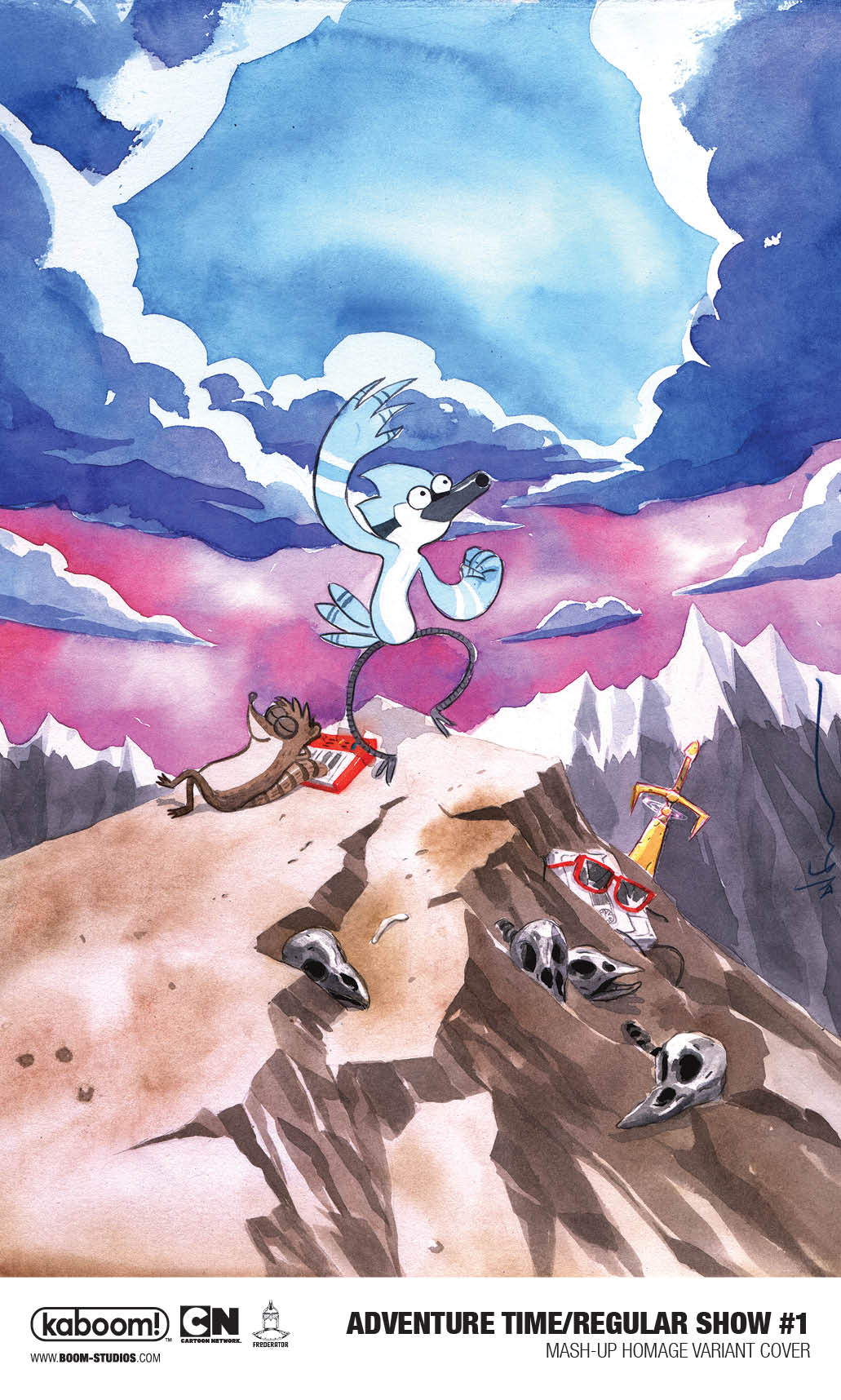 May 23, 2017 (Los Angeles, Calif.) – BOOM! Studios and Cartoon Network Enterprises announce ADVENTURE TIME/REGULAR SHOW, a comic crossover adventure that’s anything but regular. The six-issue limited series launches in August and will bring together the casts of the two hit Cartoon Network series into one story.

When a powerful new villain threatens to conquer Adventure Time’s Land of Ooo, Princess Bubblegum sends Finn and Jake on a desperate quest to find The Power that can save the land—a power that Skips from Regular Show just happens to be hiding! Finn and Jake’s arrival only exacerbates an existing tension between Mordecai and Rigby, and the trip back to Ooo threatens to tear two sets of bros apart… forever.

“When you get the opportunity to put your little flag into the surface of not one, but two of the greatest story worlds in recent history, you gotta say yes!” exclaims McCreery. “I’m excited, terrified, tickled, and tormented by all the amazing characters and storylines that could go into this crazy thing. Adventure Time and Regular Show are special to me because of the combination of out-of-left-field humor and really deep emotion. I’m going to try to honor those twin engines as best I can with a story that has a LOT of weird stuff, a whack of battles, a few tears, and at least one incidence of Ice King being a patoot.”

“Being a super-fan of Adventure Time and Regular Show, this is really like a dream for me,” adds Di Meo. “I know it sounds kinda weird, but it feels just like being in love for the first time—that peculiar mixture of deep enthusiasm, and deafening emotion. Jokes aside, I want to deliver that special magic that those series always had for me. That sense of fun, adventure with that special levity that made all those stories special for me.

Through its award-winning all-ages imprint KaBOOM!, BOOM! Studios began publishing Adventure Time comics in 2012 and Regular Show comics the following year. Both comic series went on to break sales records for all-ages comic publishing. From the mind of series creator Pendleton Ward, the Emmy and Peabody Award-winning Adventure Time follows the unlikely heroes Finn and Jake, best buddies who traverse the mystical Land of Ooo and encounter its colorful inhabitants—and always find themselves in the middle of heart-pounding escapades. Created by J.G. Quintel, Regular Show chronicles the adventures of Mordecai, a blue jay, and Rigby, a raccoon, a couple of best bros in their 20s who work as groundskeepers at a local park—but would rather chill out for a bit.

“It’s almost silly that we haven’t had this crossover yet,” remarks Whitney Leopard, Editor. “Adventure Time and Regular Show are both incredible series with a great cast of characters that work amazingly together. Conor and Mattia bring both worlds together in such a fun and way, you’re not going to want to miss it!”

Adventure Time/Regular Show #1 features a connecting main cover by Phil Murphy (both covers will ship in a 50/50 intermix), a subscription cover by Jorge Corona that pays homage to an Avengers vs. X-Men #1 cover, and a mash-up homage cover by Dustin Nguyen, featuring Mordecai and Rigby emulating the Adventure Time title card.

Print copies of Adventure Time/Regular Show #1 will be available for sale at local comic book shops (use comicshoplocator.com to find the nearest one) or at the BOOM! Webstore in August. Digital copies will be available to purchase on digital book marketplaces, including ComiXology and the BOOM! Studios app.

Adventure Time/Regular Show is the latest release from BOOM! Studios’ critically acclaimed KaBOOM! imprint, publisher of world-class licensed series such as Steven Universe, Over the Garden Wall, Peanuts, and Garfield, along with original series like Brave Chef Brianna by Sam Sykes and Selina Espiritu, and The Deep by Tom Taylor and James Brouwer.

For news on Adventure Time/Regular Show and more from BOOM! Studios, stay tuned to www.boom-studios.com and follow @boomstudios on Twitter.

Phil Latter is a Canadian Comic Book Historian, and is the First Comics News Canadian Bureau Chief. He has collected, read & enjoyed comic books, collecting prolifically, his entire life. He collects comic books, vintage Pulp magazines, original comic book art, vinyl record albums, (including Power Records, and Zorro items. He’s collected vintage comic books & new comics, for over 40 years. He says, “Comics keep me young at heart!” Phil’s personal comics collection features over 85,000 comic books, (not a typo), mostly U.S. and Canadian comics. But, further, comic books & related memorandum from all over the world, dating from the early 1920’s, right up to the present.
Phil Latter is recognized as being one of the foremost world authorities on Johnston McCulley’s Zorro. He is an artist & published writer, and he collects anything and everything to do with the Zorro character. His well-known Pulp magazine website for this character is at Yahoo Groups: https://groups.yahoo.com/neo/groups/johnstonmcculleyzorro/info
To join us on this popular group, membership at this busy website, is free! Phil has been published in Roy Thomas’ ‘Alter Ego’ magazine, and (in prose fiction, reviews, articles, & his artwork), in numerous issues of the Canadian English language (from Quebec) Batman fanzine, ‘The Midnight Conference.’ Additionally, he has conducted numerous interviews of comics pros, columns and articles, on the websites, Silver Bullet Comic Books.com, Comic Bulletin.com, and at First Comics News.com. And also in these additional fanzines: ‘The Maine Comics Club Newsletter’, & in numerous issues of both ‘The Dragon Lady Dispatch’ (from Toronto’s ‘Dragon Lady Comics Shop’), and in many issues of the fanzine, Gene Kehoe’s “It’s A Fanzine.”
Born in the village of Herring Cove, right on the Atlantic Ocean, Phil currently lives in The Halifax Regional Municipality, in the Canadian province of Nova Scotia, with his four felines: Jasper, Ivy, Oscar, and…Zorro-!