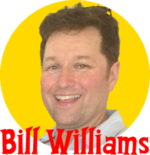 Punchline is a coming of age superheroic comic book story by Bill Williams and Matthew Weldon. It’s a story where you can’t tell if any of the characters actually like each other. It’s also a comic with no character called Punchline. To help navigate through all of this Bill Williams stopped by First Comics News.

Bill Williams: That’s a bit of a trick question. Jessie’s Mentor in PUNCHLINE is named Mel. That’s all of the information she has given to her replacement. When she hands someone a business card with the name ‘Melanie Daniels’ on it I want people to wonder if that is her real name or a cover identity.

Bills: Mel was born in the 1920s and has a youthful appearance due to the supernatural aspects of her benefactors. If comics are wish-fulfillment then she had it all- youth, beauty, and power. And then she got fired.

I’m a fan of Modesty Blaise and specifically Peter O’Donnell’s origin story for his lead character. That origin story comes from a real-life experience he had when he ran across a young refugee. In his Modesty Blaise stories, the young girl fleeing from a tragedy becomes involved with a life of crime and finally evolves into an investigator and secret agent.

In Punchline, that same fictional refugee took a wrong turn at her inflection point and became a costumed hero. In many ways, Mel is still that angry young girl with a knife in her hand.

1st: What was her heroic identity before Punchline #1

Bills: Mel has not revealed her codename or heroic identity to Jessie who has the job now. Mel works at being mysterious. With Punchline, I am more interested in writing about characters and less interested in costumes and how all of the powers work.

I’m more interested in what the characters do when they become empowered.

1st: How did she get her powers? 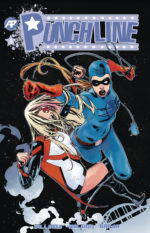 Bills: Mel was granted her powers the night her mother died. She has been in the employ of a supernatural group. By the time we wrap up the twelfth issue, many of these questions will have answers.

1st: Who does Mel work for?

Bills: Mel works for an ancient order that works for the betterment of mankind. That organization works in private and empowers women, making them costumed heroes. Mel can be a bit difficult, so she gets fired in the first issue.

The first collection, cleverly titled BLOOD SISTERS, draws a clear distinction between Mel and Jessie. Mel is an older character, kind of a Greatest Generation- type. She is training Jessie, a millennial kid who has had a very different set of life experiences.

Mel and Jessie clash over some of the basic questions of behavior when you’re wearing cape and acting in public.

Bills: Shawn is a super-strong friend of Mel’s. She and Mel are a cross between sisters and drinking buddies. It is implied that they have been in the hero business on one super team or another from time to time.

I liked Tolkien’s depiction of the hobbits after their various adventures. Their journey had changed them in such a way as to make it more difficult to engage with people who had not been there and done that.

That’s a cornerstone of Mel and Shawn’s friendship.

Bills: The Girls get together to have a birthday party for Mel. Arranged by Shawn, they travel the globe in search for the perfect evening. During their night off, they burn through an amazing amount of team resources. One would assume that during the day, they fight crime.

1st: Who is Jessie McGrath?

Bills: Jessie is the newest costumed hero in the fictional East Coast city of Seaholm. She’s a high schooler who has recently lost her older brother to a slow-rolling tragedy.

Jessie meets Mel after Mel has taken a serious wound. Jessie’s heart is in the right place and in many ways, the first collection is about her getting comfortable in her role as the protector of her home town. Jessie’s alter ego is Versema and she tries to make a difference in Seaholm, a fictional mishmash of Boston and San Diego.

Jessie’s father has an interesting backstory which rolls out in Punchline #9.

1st: Did Mel pick Jessie as her successor or was it just a random meeting?

1st: Can Mel take her powers back from Jessie?

Bills: In the beginning, Mel hopes that she can reverse what has happened to her. She hangs around and trains her replacement and while she does not straight outcome and say she wants her powers back, she’s clearly up to something.

In Punchline #8, a representative of the secret order appears before Mel and lets her know what the future holds for her.

Bills: It would be a bit of a stretch to say that Jessie likes everyone, but she has an open heart and an open mind, Jessie wants to help people. She is drawn to Mel who is facing her death with a certain style, a certain grace.

As that first story goes on, Jessie realizes that her mentor is kind of not the mentor she wanted. If our suffering is tied to our expectations, then Jessie’s emotions get a little whiplash when it comes to her relationship with Mel.

Bills: Punchline #7 starts with Versema meditating on just how shady Mel can be. By the end of the issue, Mel seemingly proves Jessie’s fears right. Still, they’re in a set of circumstances together so they have to rely on each other to an extent.

1st: How is it that Jessie’s parents don’t notice she is missing when she is off fighting super-villains?

Bills: In Punchline #9, Jessie’s parents confront her about her other life. It is one of my favorite issues. The parents do most of the talking and Jessie’s mind is blown.

1st: What is the tragedy that effects Jessie and her family?

Bills: Jessie’s brother was a star athlete. After breaking his leg, he got hooked on pain-killers and died of an overdose. Sadly, it’s a common story in our world. I wanted to inject something a little new and a little real into the comic and this seemed like a good fit.

1st: What is Mel’s relationship with the authorities?

Bills: Mel lives the life of a pirate. She acknowledges no authority higher than herself and she stays one step ahead of the system and her old enemies. Or, at least she did before she took a bad injury and had to trust her duties to Jessie.

Now, Mel has to learn how to go on in a diminished capacity. Going forward, Jessie’s story is the story of a young hero learning the basics of the job as she tries to make the world a better place. Me’s story is dealing with loss and how you go on through your life as a shadow of your former self.

When I’m at shows and tell people that Punchline is about a costumed hero that gets fired and then has to train her replacement, people grin. Most people have lost jobs and they can relate to that kind of transition.

1st: What is Jessie’s relationship with the authorities?

Bills: Jessie gets along with the authorities until one of them asks has about Mel.

1st: Beetle Girl is a Lucky Comics character, how did she end up in Punchline?

Bills: I like the concept of found art and I like Golden Age Costumed characters. In the Lucky Comics stories, Beetle Girl is a descendant of the original Blue Beetle, the one from the radio with the shirt as strong as steel and light as silk.

I contacted John Michael Helmer at Lucky Comics after I saw the character and read a few issues. We arranged a one-shot team-up and that story runs in the first collection.

I sent John some books and made sure he signed off on the story and got a credit. When I asked him if he’d like to try it again, he agreed, Now, we’re looking for a place in the schedule for another Beetle Girl story.

1st: Jessie calls herself Versema, why is the comic called Punchline?

Bills: My partner Matthew Weldon named the series. He said we needed something memorable and I agreed. He was right. He also named Versema. As I was writing the first few issues, I just called her Jessie while other parts of the script were in development.

1st: What makes Punchline so cool no true comic fan should miss it?

Bills: I asked my long-time friend Bill Willingham for a quote for the first trade paperback. In the last half of the quote, he writes, “Is Versema, the hero in training, going to be good, or just good enough?”

That’s an answer worth knowing.

https://www.firstcomicsnews.com/bill-williams-talks-about-punchline/https://www.firstcomicsnews.com/wp-content/uploads/2019/04/Punchline-logo-600x257.pnghttps://www.firstcomicsnews.com/wp-content/uploads/2019/04/Punchline-logo-150x64.png2019-08-23T00:38:17-07:00Rik OffenbergerInterviewsTalking About...about,punchline,talks,williams
Punchline is a coming of age superheroic comic book story by Bill Williams and Matthew Weldon. It's a story where you can't tell if any of the characters actually like each other. It's also a comic with no character called Punchline. To help navigate through all of this Bill...
Rik Offenbergerrik.offenberger@firstcomicsnews.comAdministratorRik Offenberger has worked in the comic field as a retailer, distributor, reporter, public relations coordinator, writer and publisher since 1990. He owns and operates the e-mail bases Super Hero News service, and his published works in print can be seen in The Comics Buyers Guide, Comic Retailer, Borderline Magazine, Comics International and Alter Ego. On the internet he has worked as a writer and/or editor for Silver Bullet Comicbooks, Comic Book Resources, Newsarama and First Comics News. He was the Public Relations Coordinator at Archie Comics for a decade. He is currently the Editor-In-Chief at G-Man Comics. For TwoMorrows Publications, Rik co-wrote The MLJ Companion with Paul Castiglia and Jon B. Cooke, charting the history of Archie’s superheroes.First Comics News
aboutpunchlinetalkswilliams

Rik Offenberger has worked in the comic field as a retailer, distributor, reporter, public relations coordinator, writer and publisher since 1990. He owns and operates the e-mail bases Super Hero News service, and his published works in print can be seen in The Comics Buyers Guide, Comic Retailer, Borderline Magazine, Comics International and Alter Ego. On the internet he has worked as a writer and/or editor for Silver Bullet Comicbooks, Comic Book Resources, Newsarama and First Comics News. He was the Public Relations Coordinator at Archie Comics for a decade. He is currently the Editor-In-Chief at G-Man Comics. For TwoMorrows Publications, Rik co-wrote The MLJ Companion with Paul Castiglia and Jon B. Cooke, charting the history of Archie’s superheroes.
View all posts by Rik Offenberger »

‘Punchline’ Gets a 48-Page One-Shot in November!