If you fall into either of those categories, whether you’re indifferent, apathetic, offended, insulted, perplexed or in any other mental/emotional state that is averse to this, God loves you anyway.

For those of you who have children you love with all your heart and soul, that all consuming love that overwhelms you at times when you think of your kid(s) is a small taste of what He feels for you – even when you’re yelling at Him for ruining your life.

For those from dysfunctional families who secretly wish their parents had that same sort of insatiable love for you, He does whether they do or not.

In the end, love is the guiding force that makes this world work.

The feeling of love is the pinnacle of existence. We love all sorts of things, be they comic books, video games, bands, blockbuster movies, Jedi Knights or super heroes. We love all sorts of people; in our minds and hearts through the power of love friends and family become one and the same.

Love cures all, heals all and ultimately wins all.

You can argue against that, tell me I’m wrong, deluded, brainwashed or simply in possession of a defective mentality, but you can’t deny that love wins.

If you try to fight it, the need for it only gets stronger.

What makes love so great is that it can’t be forced, controlled, commanded or demanded. It’s organic, consuming, fulfilling and free.

While modern society has allowed Christmas to be co-opted into a day of personal pleasure derived from new possessions and things we will eventually return, give up, sell or throw away, the day is really about one simple thing: Love.

So, instead of reading this, scoffing at the idea that some idiot on the interweb is trying to tell you God loves you and then finding places to share the upwelling snark, go find someone you love, tell them you love them, share that feeling, bask in it and forget about all the stuff for as long as possible.

For the few who have no such person to share love with, just remember God loves you and I do too. 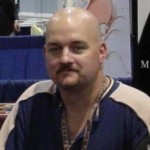 Mike Bullock is an award-winning fiction writer, poet and former professional musician. Born in Washington DC, Bullock grew up reading comic books, comic strips and pulp fiction after learning to read with DC 80-Page Giants featuring Batman. He’s translated this love of fast-paced imaginative story-telling into a successful career as a comic book and prose author. Having worked on enduring characters from Black Bat and Captain Future to Sonic the Hedgehog and Zorro, Bullock cemented his place in the annals of speculative fiction by authoring more Phantom stories than any other American writer aside from Lee Falk, the character’s creator. His original works include Lions, Tigers and Bears, Timothy and the Transgalactic Towel, The Gimoles, Death Angel and more. Bullock’s acclaimed prose work has led to two prose series deals for 2012-13 with the debut of two new novel lines featuring Bullock’s own creations The Runemaster and Xander from Runemaster Press and Pro Se Productions, respectively.