Monday through Friday, for the next two weeks, I will be doing mini podcasts with ONLY non-contracted, full time pro wrestlers.
These are wrestlers who quit their jobs and wrestling is their only income. How is this Global pandemic effecting them? How can you support? Ten different answers and scenarios from ten different wrestlers living the same dream. Listen til the end for a preview of the whole series.

This series will also spotlight independent musicians from artists who LOVE professional wrestling. 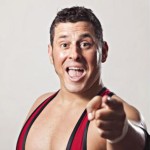