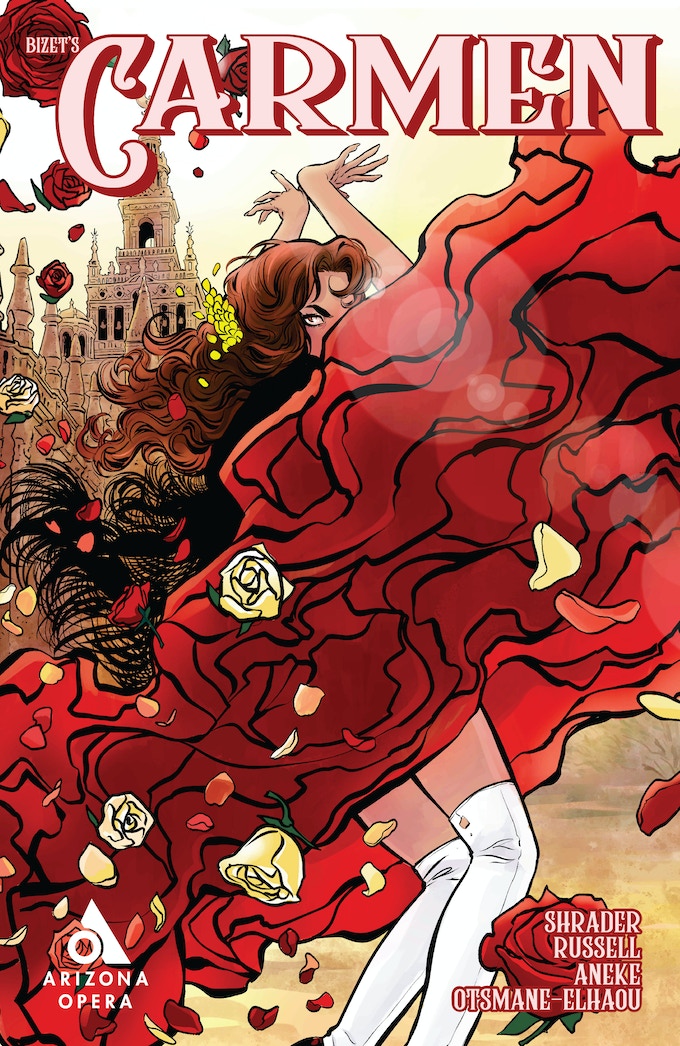 PHOENIX (March 28, 2022) – Perhaps the most famous opera in history, Georges Bizet’s Carmen premiered in 1875 at the Opéra-Comique in Paris. The four-act opera, featuring a libretto written by Henri Meilhac and Ludovic Halévy and adapted from the novella by Prosper Mérimée, remains one of the most exciting and popular works in the repertoire. And now, nearly 150 years later, the story of Carmen is being adapted again — this time as CARMEN: THE GRAPHIC NOVEL, written by opera singer and director Alek Shrader and illustrated by legendary artist P. Craig Russell (NEIL GAIMAN’S AMERICAN GODS) and Aneke (BYLINES IN BLOOD), and lettered by Hassan Otsmane-Elhaou. Arizona Opera is launching a Kickstarter campaign for this ambitious adaptation which is live now.

“It’s a thrill for Arizona Opera to share the work of this remarkable team of artists through the graphic novel format and the timeless story of Carmen,” said Joseph Specter, Arizona Opera’s President and General Director. “Throughout the pandemic, our company has constantly pursued novel approaches to connecting people through opera, when people need art and meaning the most. CARMEN: THE GRAPHIC NOVEL represents an amazing opportunity to extend that focus on innovation, impact, and community.”

As part of the campaign, Arizona Opera has commissioned some of the most acclaimed artists in comics to create collectible Kickstarter-exclusive prints to celebrate CARMEN: THE GRAPHIC NOVEL. There are three CARMEN prints from New York Times bestselling cartoonist and illustrator Colleen Doran (Neil Gaiman’s SNOW, GLASS, APPLES), Erica Henderson (SQUIRREL GIRL), and Marguerite Sauvage (FAITH) and three collectible prints for other operas which Arizona Opera will stage in 2022: an ARIADNE AUF NAXOS print by Natacha Bustos (MOON GIRL AND DEVIL DINOSAUR), a TOSCA print from Erica d’Urso (INFERNO GIRL RED) and colorist Marissa Louise (GRUMBLE), and a MAGIC FLUTE print by Ana Mirallès (DJINN). 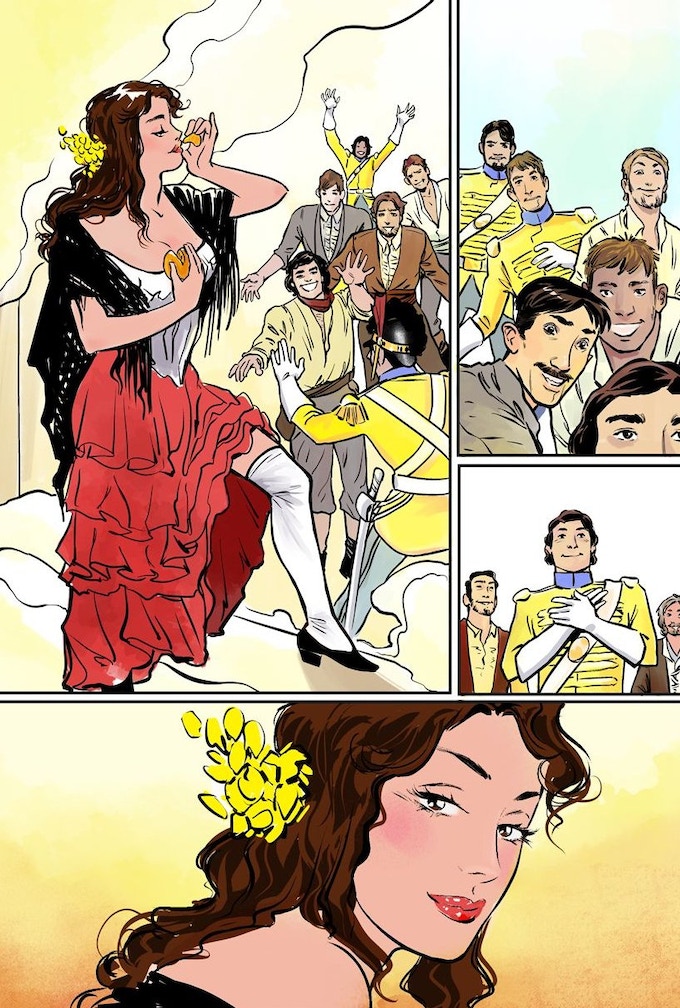 CARMEN: THE GRAPHIC NOVEL is the passion project of writer Alek Shrader, an operatic tenor and director, who is best known for his appearance in The Audition, a documentary about the Metropolitan Opera National Council Auditions. For his first graphic novel, Shrader collaborated with the New York Times bestselling illustrator P. Craig Russell, who is renowned both for his graphic novel adaptations of Neil Gaiman’s novels, and his acclaimed adaptations of opera, including Mozart’s The Magic Flute, Leoncavallo’s Pagliacci, and Wagner’s Ring Cycle. For CARMEN: THE GRAPHIC NOVEL, P. Craig Russell provides the layouts, which are finished, illustrated, and colored by Aneke, who has drawn comics for DC Comics and Marvel. CARMEN: THE GRAPHIC NOVEL is planned as an epic 90-page adaptation, featuring a stunning cover illustrated and colored by Aneke.

“There’s a reason that Carmen remains one of the most frequently performed operas,” said Shrader. “Themes that were fashionable in Bizet’s day still captivate audiences. There’s a power struggle between the sexes, a meditation on the question of freedom versus fate, and a stark contrast between the exotic Roma lifestyle and a repressed society. And, of course, everything is set to some of the most gorgeous and tuneful music in all of opera.” 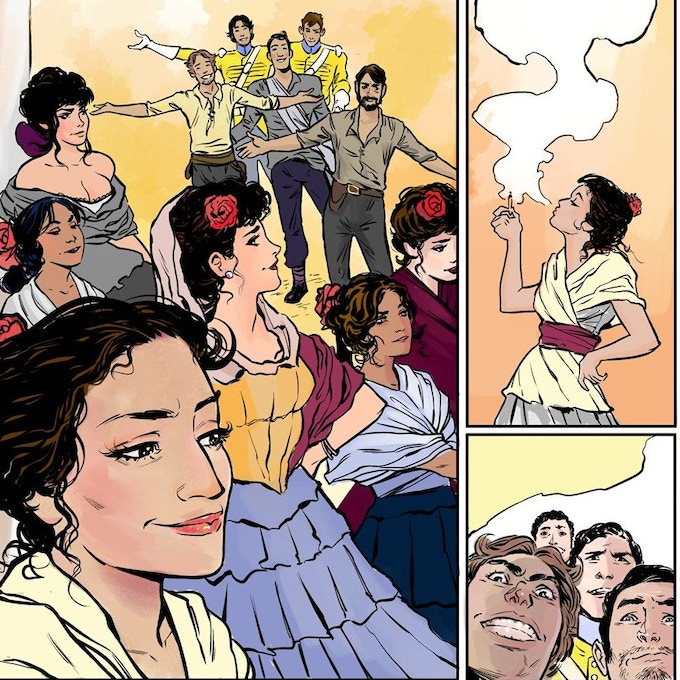 “What appeals to me most about Carmen is the strength of her character,” said Aneke. “Her timeless appeal to audiences transcends time, politics, and societal change. Through her strength, we see her vulnerability, passion, and sexuality exude from the stage. Through a graphic novel, new audiences can be introduced to one of the most well-known, fearless women in opera.”

The development of CARMEN: THE GRAPHIC NOVEL originated through Arizona Opera’s OnPitch Business Challenge, created in association with ASU’s Herberger Institute for Design and the Arts and the W. P. Carey School of Business. Funding for OnPitch was made possible by an Innovation Grant from OPERA America, through the generous support of the Ann and Gordon Getty Foundation. OPERA America’s Innovation Grants support exceptional projects that have the capacity to improve the vibrancy of opera in the field’s most important areas of practice, with a focus on empowering organizations to increase their investment in experimentation and innovation and contribute to field-wide learning.

“CARMEN is the perfect opera for longtime opera aficionados and newcomers alike,” said Shrader. “And ultimately that’s why I wanted to adapt Carmen with Arizona Opera. If you love Carmen, but are new to comics, you can appreciate the storytelling on the page. And if you are a comics fanatic but are new to opera, here’s a book that practically sings.”