Amanda Conner Returns to Vampirella With Exclusive Comic Available Only on Indiegogo! 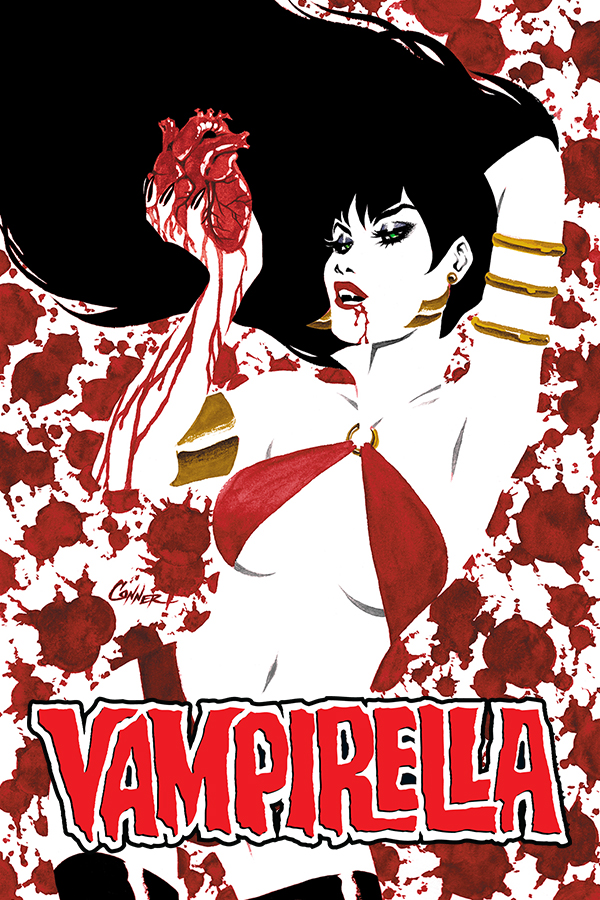 February 2, Mt. Laurel, NJ: Today Amanda Conner is one of the industry’s most celebrated artists. The road to get to that position took a major turn 25 years ago when she first drew Vampirella, and now she’s returning to the heroine for an exclusive new release only available on Indiegogo!

Amanda Conner is known across the comics community and further for her fan-favorite writing and art on titles like Harley Quinn, Power Girl, Before Watchmen, and more. In 1996, after a period of being typecast as an artist for comics oriented to young children or girls, Conner became the lead artist for Vampirella at the height of the “bad girl” trend. She capped off Tom Sniegoski’s beloved run by concluding the original Vengeance of Vampirella series and the hyped-up death of the character. Chronicling the expected resurrection and proceeding blockbuster relaunch, Amanda became to many the next definitive artist of the character at the time, following Jose Gonzalez from decades prior. Returning for covers and occasional stories through the Harris era, she cemented that legacy.

Despite frequently working with the publisher, Amanda had not drawn a Vampirella cover for Dynamite until January’s Vampirella #7. With that one down, and anxious for more, now she’s back with another to celebrate the character’s 50th-anniversary finale, exclusively delivered directly to fans via crowdfunding. But more than that, Dynamite is assembling a unique package for fans to really celebrate her legacy.

The new cover will grace a commemorative issue reprinting some of Amanda’s hallmark contributions to the character through the years. Front and center will be her kickoff to the 1997 relaunch often referred to as “The New Monthly,” with writing from an all-star duo of Grant Morrison and Mark Millar, and inks from her husband and creative partner Jimmy Palmiotti. This issue features the first appearance of the sadistic Von Kreist, who has been appearing in Christopher Priest’s current run on the character. A special treat for fans is the added inclusion of Amanda and Jimmy’s short story from the 2004 Halloween Trick & Treat special. This hilarious romp and its fan-favorite opening splash page capture the creative pair’s trademark humor.

Collectors can snag the new limited edition comic book with a standard dressed cover, a logo-free “virgin” edition, sans color in black and white highlighting Amanda’s ink work, or even as a premium metal variant! Conner will be signing a limited number of copies for her biggest fans. And a range of add-ons include a beautiful 18 by 24 inches lithograph print and rare versions of Amanda’s Red Sonja statue.