It waasn’t all that long ago that DC announced that Doomsday Clock #9 would be delayed. Personally, I hate when comics can’t meet their announced schedules. I guess I wasn’t alone because artist Gary Frank went on Twitter and posted a drawing from #10 to whet our appetites. What did it feature? What seems to be the Justice Society!

As a long-time fan of the JSA, I was encouraged! But I worry when time-locked characters appear in comics because, as they say, “time marches on.” And it doesn’t stop!

THE PROBLEM WITH CHARACTERS FROM SPECIFIC TIMES 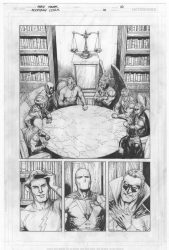 The JSA is just one of the prime examples of comics characters who were created and intended to appear during specific times. Another one is Captain America, who I still have trouble with.

See, the Justice Society was created, much like the JLA, to highlight the lesser-selling heroes in their day along with the more popular folks. The old concept that exposing characters to fans of other heroes in the hope of increasing their popularity is what’s at play here.

The biggest concern about the JSA was that, like Cap, they were tightly bound to World War II in the 1940s. Granted, they sold more comics during that time because of it, but even WWII ended at some point, and superheroes didn’t quite sell as well when there weren’t global-sized adversaries to take on.

What DC has often done in the past is introduce a new “generation” of heroes to take their place. After all, if the JSA was big during the 40s (and they were likely in their 20s or early 30s), when the 1960s came along years later, they’d be significantly older. That also could mean lesser powered and less interesting to readers who were not in the same age bracket.

I do have to point out that some of the most fun I had as a young reader took place during the yearly JLA/JSA crossovers. Seeing all those heroes interacting, often taking on foes that could imperil multiple universes was always a thrill for me.

Eventually, though, even that event began to lose its luster. DC tried several times to tell good stories with the JSA, taking them back in to their original time period or, as mentioned, bringing younger proteges to the forefront. Or they had the Spear of Destiny keeping the heroes younger for a while.

Most recently, I loved the Earth 2 comic in which DC focused on the JSA in another universe. Again, they did make significant changes to the line-up, most notably making their Green Lantern gay. They could literally do anything on that Earth, and it made for fun reading because we simply had no idea what was what there.

However, even that ran out of steam eventually. Part of that had to do with the fact that #25 sells much less than #1, and they couldn’t keep rebooting the series endlessly. So Earth 2 ended about the time when ‘Rebirth’ began. 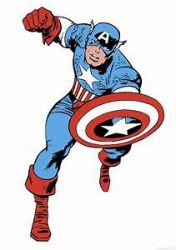 Marvel has had something of the same problem with Captain America. He fought alongside Bucky during WWII, only to be refrigerated until the Avengers thawed him out in the later 1960s.

My concern is that, if all this is true, Steve Rogers should be in his 70s or 80s by now.

Of course, you can try all kinds of devices to resolve this such as his Super Soldier formula giving him longer life or alien energies keeping him young—stuff like that.

(Honestly, the biggest problem Steve faced was that the brand of patriotism that brought him to life fell out of favor, and they could only bring back Nazi-inspired threats just so often.)

When I look at Cap these days, I see they simply tend to ignore the “age issue,” as I like to call it.

And there is some precedence for that. I remember the day when DC declared Batman to be always in his early 30s no matter how many comics featured him. Bruce seems a little older these days, but he ages so slowly that it doesn’t make that much of a difference.

Same with Cap. You just carry on, and no one asks how old he is.

WHAT’S A COMICS COMPANY TO DO? 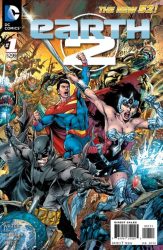 Personally, I never considered time in comics to pass at the same rate it does in reality. But there are some folks who think that every issue covers a month in comics time, maybe less if it comes out twice a month.

I know I say this a lot, but to me it’s very true—It’s the story that matters. I don’t get distracted by canon, as it’s called in Star Trek, for instance, or other inconsistencies if I’m engrossed in what’s going on.

That doesn’t hold true for everyone, though. I have some friends who just writhe in agony when people in comics don’t age “in real terms.”

Most comics have handled this by not linking heroes to specific events in history. If you do that, you’ll be in trouble once enough time passes.

But what do you do when that’s happened, and it’s too late to change that?

There’s also the “Phantom” way of dealing with it. You know, the Phantom has existed in Africa for centuries, which mean the hero’s son keeps taking over for him. What do you do if you only have a daughter, I wonder? Also, we don’t see Phantom comics coming out these days either, so that many not support this way of dealing with a character’s age.

As I’ve often pointed out in the past, if I could come up with a solution for this kind of problem, I just might become a writer in my own right! But I haven’t been able to do anything except parrot existing methods, so I turn to you!

American Comics: A History … A Review

Wayne’s Worlds: How ‘Real’ Should Comics Get?

Wayne’s Worlds: I Love the Character, But I Don’t Buy the Comic!