It’s almost time for Emerald City Comic Con 2018…and Valiant will be there to kick off Washington State’s biggest pop culture convention with a show of force from the largest independent superhero universe anywhere in comics!

From Thursday, March 1st to Sunday, March 4th, Valiant will be showcasing the renowned creators and iconic heroes behind its award-winning publishing line with an incredible roster of convention-only exclusives, panels, programming, and more!

All weekend long, join us at Booth #1701 inside the Washington State Convention Center as Valiant jumps into ECCC 2018 with a shelf-busting selection of comics, trade paperbacks, and deluxe hardcovers for worldwide fan-favorite series, including X-O MANOWAR, BLOODSHOT SALVATION, SECRET WEAPONS, FAITH, NINJA-K, DIVINITY, and more!

Plus: Available only at ECCC 2018, don’t miss the SECRET WEAPONS: OWEN’S STORY #0 ECCC 2018 Exclusive Variant, featuring the gorgeous work of rising star Hannah Fisher (Tomb Raider)! Witness one of the year’s most unlikely and unorthodox origin stories as the complete SECRET WEAPONS creative team – including Academy Award nominee Eric Heisserer (Arrival) and Harvey Award-nominated artists Raúl Allén (BLOODSHOT REBORN) and Patricia Martín (WRATH OF THE ETERNAL WARRIOR) – reunite for a standalone tale spotlighting a day in the all-too-complicated life of Owen Cho, one of Livewire’s newest recruits and quite possibly the Secret Weapons’ most unique talent of all! 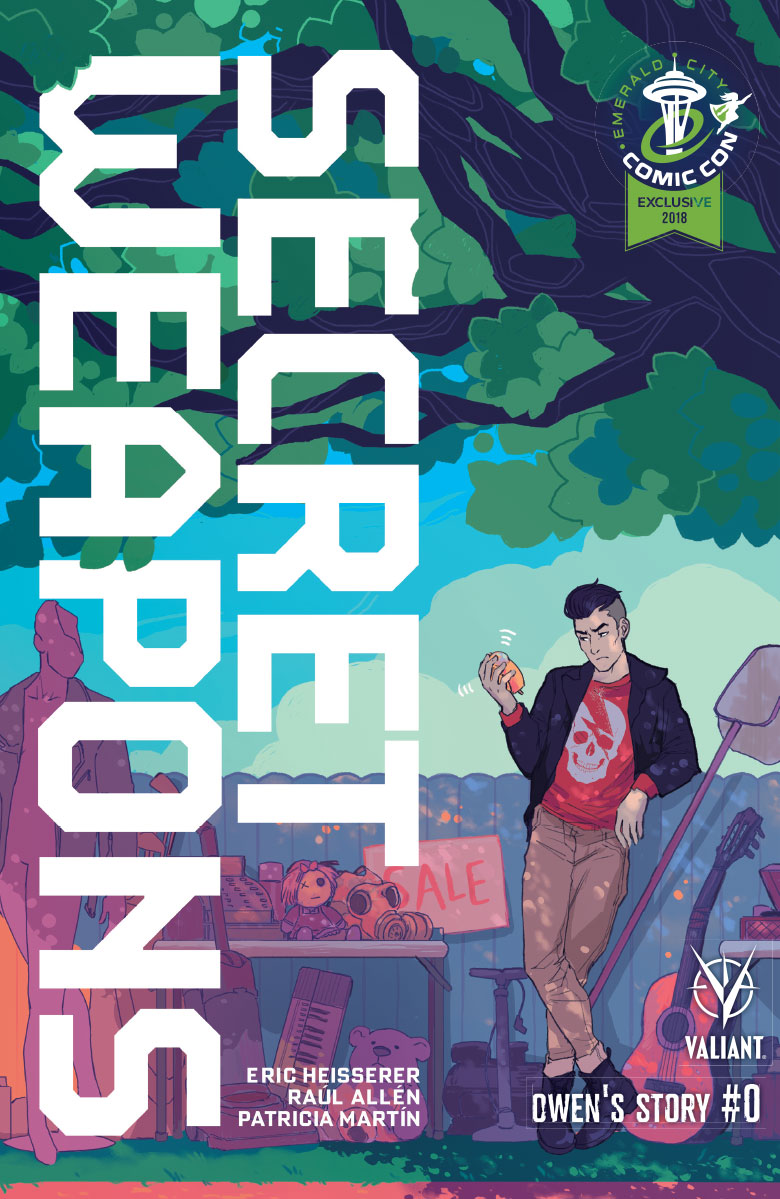 Then: With massive releases like SHADOWMAN and HARBINGER WARS 2 just over the horizon, find out what’s coming next for the Valiant Universe in 2018 and beyond with a staggering slate of panels and programming all weekend long!

First up, join us for Valiant Presents: Harbinger Wars 2 and Beyond on Thursday, March 1st at 2:45 pm PT in Room TCC L3-R2! This summer, HARBINGER WARS 2 – Valiant’s biggest, most ambitious and most impactful comic book event of all time – is about to erupt in full force as X-O Manowar, the Harbinger Renegades, Bloodshot, Secret Weapons, and a cast of thousands draw their battle lines! Valiant’s next major leap forward starts here… And don’t miss special looks ahead at SHADOWMAN, BLOODSHOT SALVATION, NINJA-K, QUANTUM AND WOODY! and much, much more!

The excitement steamrolls forward on Saturday, March 3rd at 11 am PT in Room TCC L3-R1 with Valiant Presents: Shadowman Spotlight! This March, Shadowman – more powerful, more terrifying, and more relentless than ever before – storms to the forefront of the Valiant Universe in an adrenaline-fueled ongoing series from superstar writer Andy Diggle and high-octane artist Stephen Segovia! Find out what the future holds for one of 2018’s most anticipated new series as Valiant assembles an all-star panel of staff and creators to reveal never-before-seen news and artwork, first at ECCC!

And, finally, learn the tricks behind Valiant’s storytelling trade at Valiant Presents: The Craft Of Comics! On Sunday, March 4th at 1:30 pm PT in Room TCC L3-R2, join Warren Simons, Valiant’s Editor-in-Chief, and a slate of special surprise guests for a candid, behind-the-scenes panel discussion examining the creative process behind every page of your favorite comic series! Find out just what it takes to put together a compelling story from start to finish, how to make your series stand apart, and how the editorial process functions at the highest levels – from the award-winning industry veteran behind the Valiant Universe’s greatest hits and a host of fan-favorite titles, including X-O MANOWAR, BLOODSHOT SALVATION, DIVINITY, and more!

We’ll see you in Emerald City!

Jeremy Sorese Debuts THE SHORT WHILE with BOOM! Studios