At last, the ruthless minds of Project Rising Spirit believe they’ve found a way to secure the Bloodshot asset…or have they? In this world of fabricated memories, there’s no way to tell who can be trusted…and who even exists at all!

When the super-powered psiot codenamed Livewire plunged the entire country into a nationwide power outage, she made more than a few enemies – and now she’s about to meet them face to face! But these mysterious foes aren’t simply interested in bringing her to justice…no, they have other far more nefarious plans for the most wanted woman in the world…

Dazzling writer Vita Ayala (The Wilds, Submerged) and unforgettable art team Raúl Allén (WRATH OF THE ETERNAL WARRIOR) and Patricia Martín (SECRET WEAPONS) back Amanda McKee into a corner as the most anticipated ongoing series of 2019 rages onward!

Aric of Dacia may have left Planet Gorin behind, but its people still remember the ruin they felt in his wake…and so do the bounty hunters who sought to end his barbaric reign! Enraged by the blight on their perfect record, they’ve arrived on our world to finish the job they started – and this time, they don’t plan on taking X-O Manowar alive! 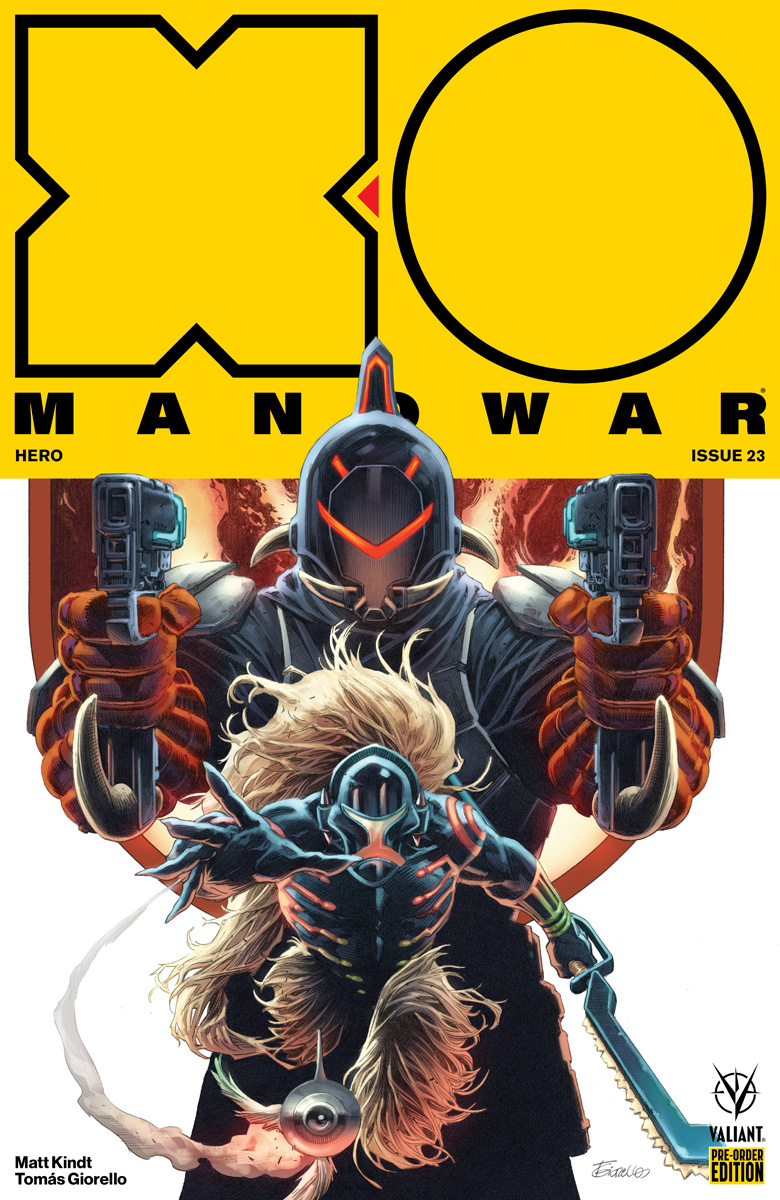 Available only as a pre-order set! The X-O MANOWAR #23-26 PRE-ORDER EDITION BUNDLE – four massively expanded editions of the latest arc in Valiant’s science fiction epic series, “HERO” – can only be ordered as a set and must be ordered with your local comic shop by the final order cut-off date of December 31st, 2018! Released monthly from January 2019 through April 2019, each PRE-ORDER EDITION comes packed with trade paperback-style extras and bonus content, including creator commentary, behind-the-scenes looks at the creation of the comics, process character designs and artwork, and first looks at upcoming issues! Plus, exclusive covers by artist Tomás Giorello (NINJA-K) that can’t be found anywhere else!

The only way to obtain these exclusive items is to pre-order all four issues with your local comic shop by the final order cut-off date of December 31st, 2018! No more copies will be made available beyond that date and subsequent issues will not be offered in later solicitations!

FAITH: DREAMSIDE #4 (of 4)
Written by JODY HOUSER
Art by MJ KIM
Cover A by MARGUERITE SAUVAGE
Cover B by SIBYLLINE MEYNET

A young girl’s soul hangs in the balance as Faith Herbert and Doctor Mirage take on the terrifying demon Belu, who seeks to break through the Dreamside barrier into our world! Will Faith find it in herself to reignite her dream of becoming a hero – or will humanity be doomed to sleepless nights forever?

At long last, Shadowman is unbound…and it couldn’t have come at a worse time! Finally free from the Boniface lineage after generations of torment, the loa that once shared its gifts with Jack Boniface must now be convinced to join his cause willingly…or else the Brethren will lay waste to everything Jack holds dear!

The Agents of G.A.T.E. vs. the Brothers of the Bomb!

Beyond time, space, and reality, there lies the Unknown…and now it’s coming here! When soldiers from a mysterious foreign realm arrive on Earth, it’s up to the armored Visigoth known as X-O Manowar – newly returned to the planet and now the leader of his own elite G.A.T.E. unit – to deal with the intrusion. But are these otherworldly emissaries truly the threat they appear to be, or does a larger danger loom over the Valiant Universe still?