Discover Why in An All-New Original How-To Guide from BOOM! Studios in July 2018 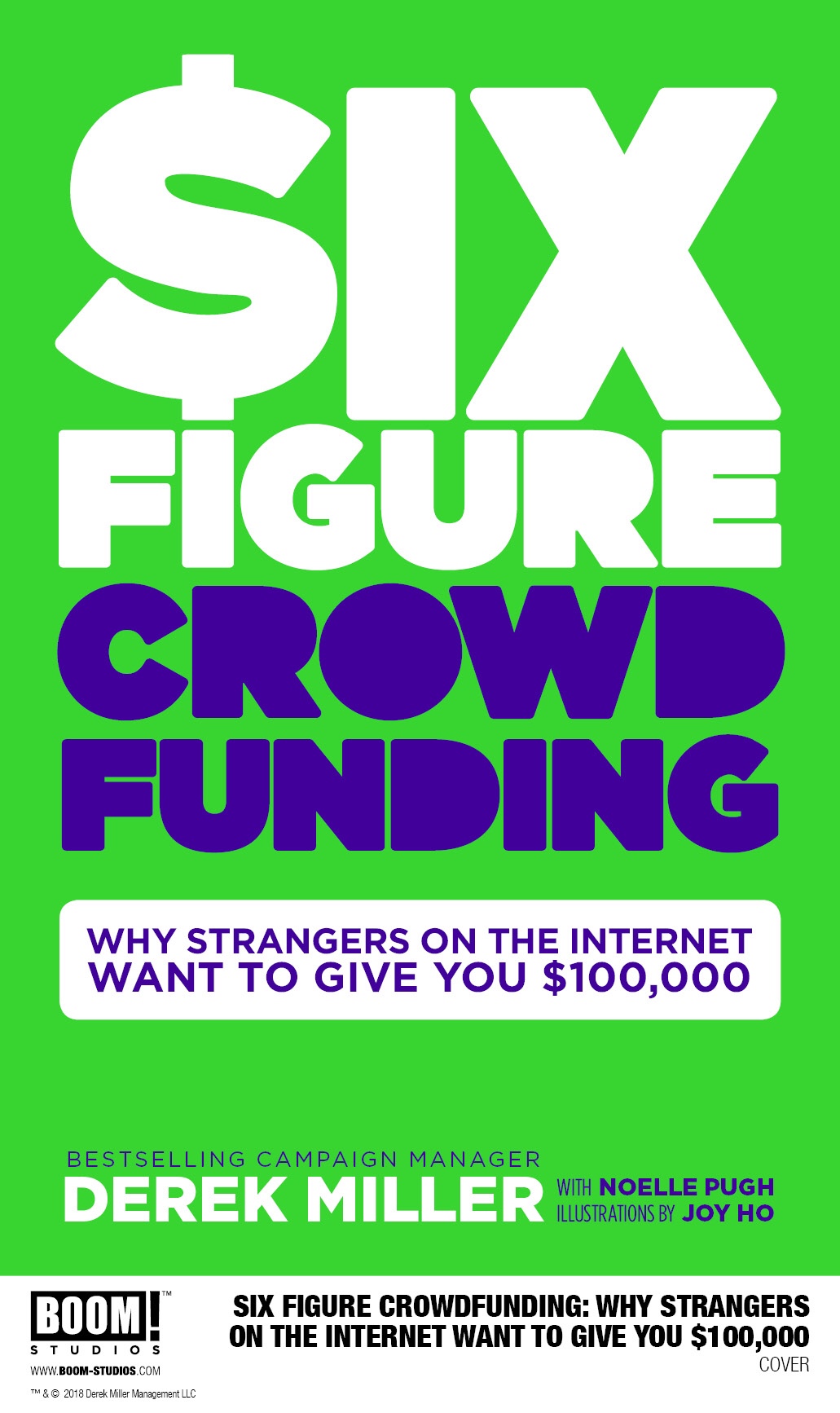 January 12, 2018 (Los Angeles, CA) – BOOM! Studios is proud to announce SIX FIGURE CROWDFUNDING: WHY STRANGERS ON THE INTERNET WANT TO GIVE YOU $100,000, a bold, irreverent, hilarious how-to guide from bestselling Kickstarter campaign manager Derek Miller (Cyanide & Happiness), co-writer Noelle Pugh (Joking Hazard), and featuring laugh-out-loud illustrations by cartoonist Joy Ho. Taking their millions of dollars of supercrowdfunding experience, SIX FIGURE CROWDFUNDING is the ultimate handbook that delivers everything you need to know about being a modern entrepreneur in today’s global marketplace.

“Most crowdfunding advice is either too basic to be useful or completely wrong. Trust me, I’ve read and taken all the courses so you don’t have to,” said Derek Miller. “SIX FIGURE CROWDFUNDING is the no-BS distilled version of advice used from actual creators who have raised at least six-, if not seven-, figures on crowdfunding. This isn’t theoretical or fluff, it’s the exact campaign tactics that have raised over $30 million on Kickstarter, directly from the creators who did the work themselves. Follow this book and you’ll get funded.”

“After reading SIX FIGURE CROWDFUNDING to the end, I was stoked to see that someone had made this beast of an endeavor so clear and fun to understand,” said Joy Ho. “As a creative, I have friends who’ve embarked on campaigns themselves, and it’s almost a given that I’ll have to engage in one in the future. While the book is a digestible read, it doesn’t compromise on the information that you need to know. And if you don’t think you might engage in Kickstarter anytime soon, it is still an advantageous read for working out what your audience wants, and what the process is for finding support for your work in the real world.”

SIX FIGURE CROWDFUNDING is packed with the collective advice and pro-tips from world-class campaign leaders who have experience raising over $30 million through successfully managing and executing several high-profile crowdfunding campaigns including Dude Bro Party Massacre 3 ($241,071) from Michael E. Peter, James Ashby, Tim Ciancio, Michael Rousselet; Augie and the Green Knight ($384,410) from Zach Weiner; OrganATTACK! ($526,274) from Nick Seluk; Superbook ($2,952,508) from Andrew Jiang; G-RO ($3,307,773) from Netta Shalgi; Pillars of Eternity ($3,986,929) from Feargus Uruqhart; and Bones I-IV ($12,380,214) from Ed Pugh. Presented in an easy-to-follow, humorous format, Miller and Pugh will teach you how to maximize your message, mechanics, and marketing.

“SIX FIGURE CROWDFUNDING is unlike anything BOOM! Studios has ever published. This is truly a modern business book for the modern entrepreneur, packed with hard and honest truths about crowdfunding that you won’t get from other authors in the space,” said Bryce Carlson, Managing Editor, BOOM! Studios. “Derek and Noelle are here to finally give an authentic voice to this growing DIY creative community. Coupled with the cavalcade of crowdfunding stars featured in this book, readers are going to get a real look into campaign successes—and failures—all straight from people who’ve lived it. If you’re serious about pursuing artistic freedom and earning that sweet, sweet crowdfunding cash, look no further.”

SIX FIGURE CROWDFUNDING will be available for sale July 2018 at bookstores (including Amazon, Barnes & Noble, and Books-A-Million) and local comic book shops (use comicshoplocator.com to find the nearest one), along with the BOOM! Studios webstore. Digital copies will be available to purchase on digital book marketplaces, including ComiXology, iBooks, Google Play, and the BOOM! Studios app.

For continuing news on SIX FIGURE CROWDFUNDING and more from BOOM! Studios, stay tuned to www.boom-studios.com and follow @boomstudios on Twitter. 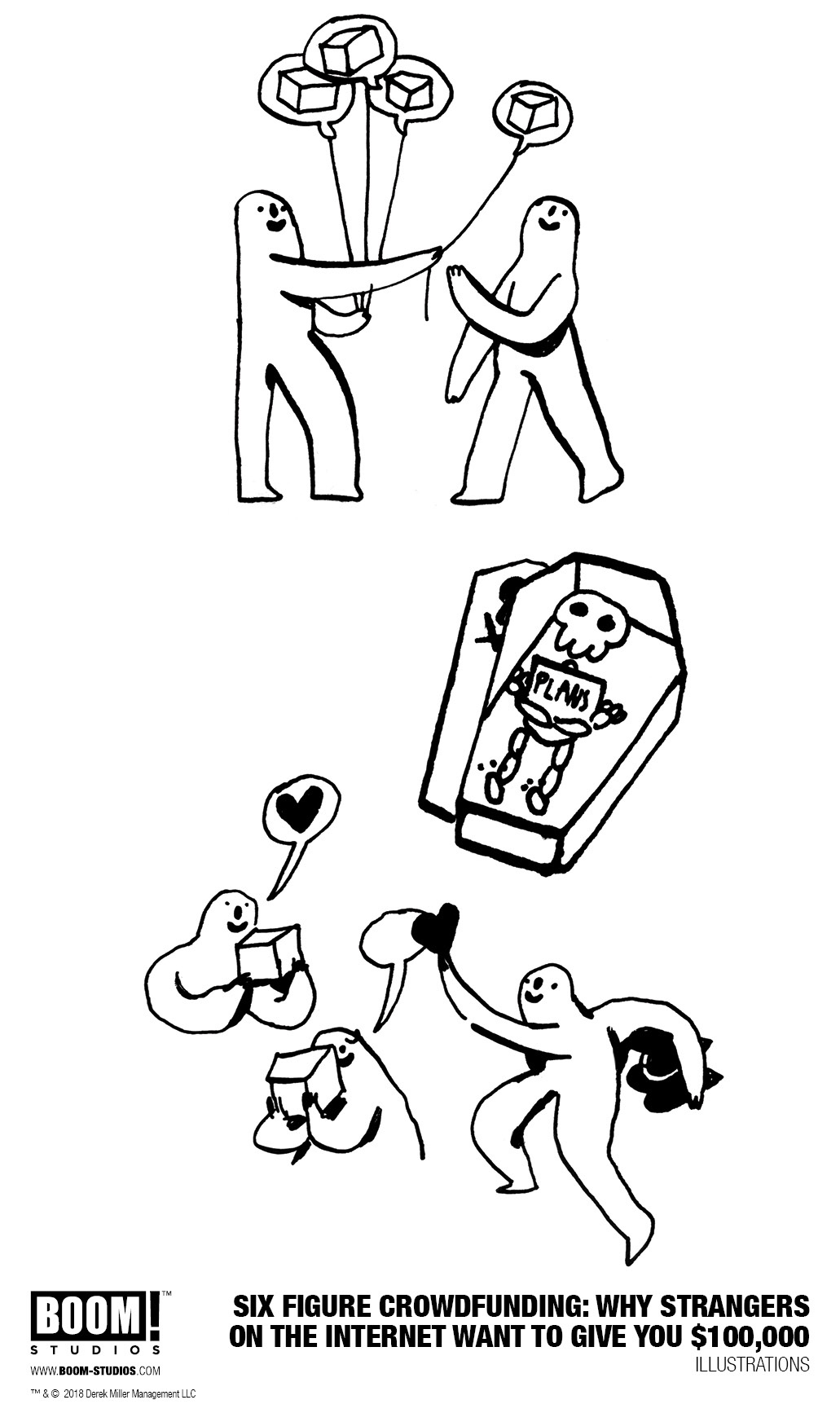 THE ROCK TO INDUCT KEN SHAMROCK INTO IMPACT HALL OF FAME

THE ROCK ENDORSES BIDEN FOR PRESIDENT