In Celebration of the Film’s 50th Anniversary

Brought To Life For The First Time in August 2018 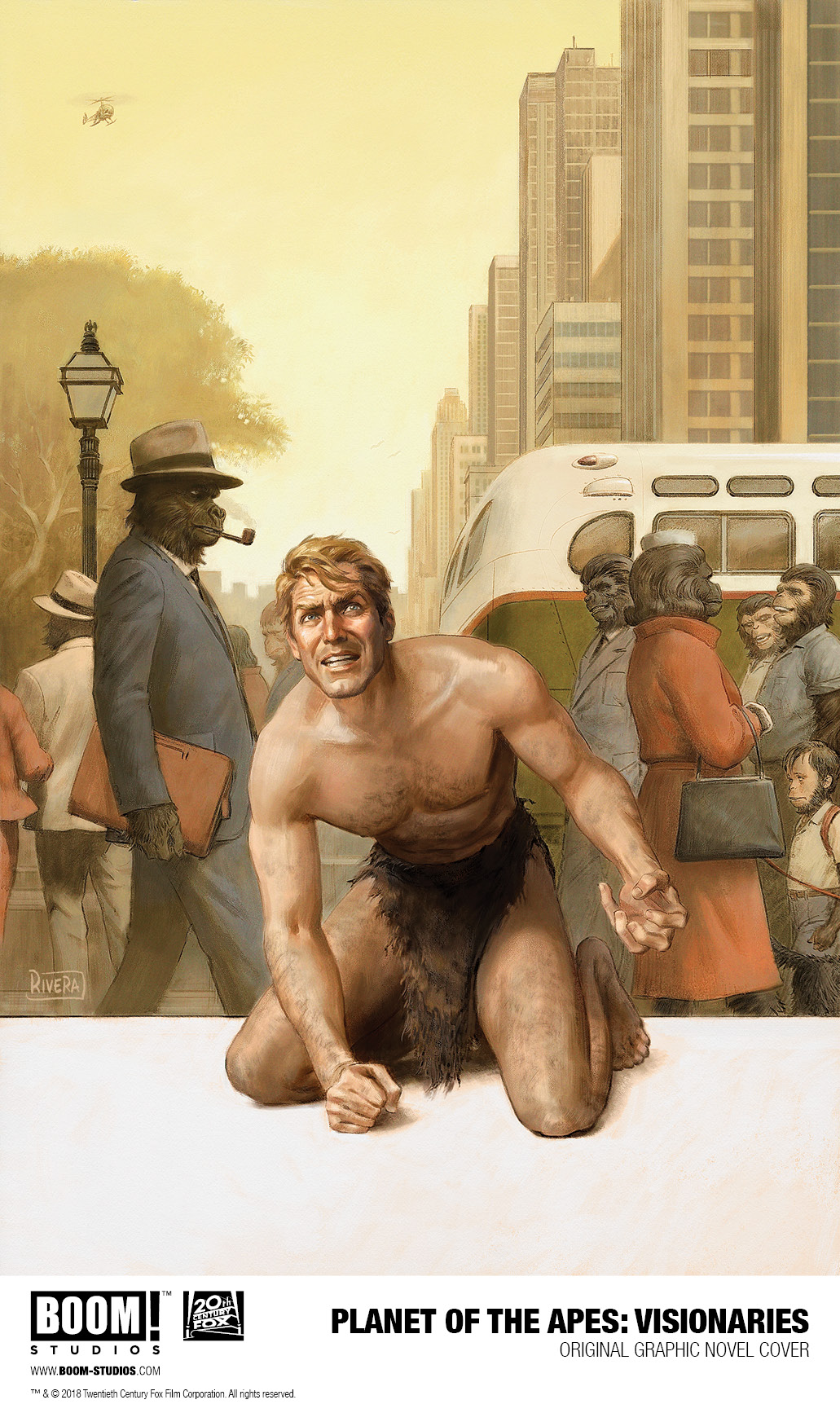 Planet of the Apes: Visionaries cover by Paolo Rivera

LOS ANGELES, CA (February 1, 2018) – BOOM! Studios and 20th Century Fox Consumer Products announce PLANET OF THE APES: VISIONARIES, a new Original Graphic Novel, releasing in August 2018 as part of the 20th Century Fox Uncovered collection. BOOM! Studios searched the 20th Century Fox film archives and unearthed the first screenplay for the original Planet of the Apes (1968) movie, written by Rod Serling, and adapted into comic book format for the first time as a part of the 50th anniversary celebration of the film.

The first Planet of The Apes (1968) film is an adaptation of the French novel La Planète des singes. On the road to making the landmark science-fiction classic, 20th Century Fox commissioned Rod Serling to adapt the source material. Serling’s first draft, which was drastically revised before filming, is a radically different vision of the franchise than the one the world has come to know and love.

Now, for the first time in any medium, that vision is fully realized as a graphic novel with PLANET OF THE APES: VISIONARIES from acclaimed actor/comedian/writer Dana Gould (The Simpsons) and Chad Lewis (Avengers Origins).

This is the world you know from the acclaimed Planet of the Apes film series, but with key differences – Taylor is Thomas, and Ape City isn’t a crude, primitive grouping of huts; instead,  it’s a bustling and urbane metropolis filled with cars and skyscrapers and a vibrant Ape culture. In a world where Apes wear modern clothes, drive modern cars and rule the late night talk show scene, the arrival of one man will forever change how Apes – and Humans – view themselves.

Using the original 1966 makeup test and concept art as a jumping off point, discover an all new, yet classic “look” to the classic franchise in PLANET OF THE APES: VISIONARIES which also features a stunning cover by Eisner award-winning superstar Paolo Rivera (Daredevil). This landmark graphic novel continues the year long celebration of the Planet of the Apes 50th Anniversary at BOOM! Studios, which has included all new comic book series, coloring books, archival collections and more.

“Planet Of The Apes meant as much to me growing up as baseball means to most kids. No lie,” said Dana Gould. “That I’m now able to be involved with this universe in a creative capacity, much less adapting the original Rod Serling script… I mean, Rod Serling! I am incredibly grateful to BOOM! Studios for this once in a lifetime opportunity.”

“PLANET OF THE APES: VISIONARIES is a dream project because it combines my love of retro sci-fi fi and anthropomorphic characters,” said Chad Lewis. “There’s nothing better than drawing human emotions on gorillas and chimps! Dana has deftly translated these great characters and world into the graphic novel format and it’s a joy to illustrate every corner of the rich universe.”

“For every Planet of the Apes fan that’s wanted to see what Rod Serling’s original film would’ve looked like and the team on this graphic novel will blow you away,” said Dafna Pleban, Editor, BOOM! Studios. “Dana Gould and Chad Lewis having lovingly adapted the ambitious, original plan for Planet of the Apes film into a graphic novel that speaks to the timeless, unflinching themes of the franchise while offering an entirely new vision of familiar faces.”

Print copies of PLANET OF THE APES: VISIONARIES will be available for sale in August 2018 at local comic book shops  (use comicshoplocator.com to find the nearest one) and book stores. Digital copies can be purchased from content providers, including comiXology, iBooks, Google Play, and the BOOM! Studios app.

COMING IN APRIL… CHILDREN OF THE ATOM!