June 14, 2018: AHOY Comics is looking to shake up the publishing industry with a bold new format: comic book magazines. The startup company is the brainchild of Publisher Hart Seely, an award-winning reporter whose humor and satire has appeared in The New York Times and on National Public Radio; two founding editors of DC Comics’ Vertigo imprint, Tom Peyer and Stuart Moore; and Chief Creative Officer Frank Cammuso. The comic book magazines will feature traditional, full length comic book stories―by Peyer (Hourman) and Moore (Deadpool the Duck) and top talents including Jamal Igle (Black), Mark Russell (Flintstones), Ann Nocenti (The Seeds) ―accompanied by extra material, including prose fiction by writer Grant Morrison (Happy!), cartoons by Shannon Wheeler (God is Disappointed In You), poems by Hart Seely (Bard of the Deal: The Poetry of Donald Trump), and traditional comic book back up stories. AHOY Comics will debut in comic book stores across the country in September of 2018.

“It’s time to expect more from comics,” said AHOY Comics Editor-in-Chief Tom Peyer. “AHOY Comics offers a wide breadth of contributors from the worlds of mainstream and indie comics and humor magazines. We’re publishing comic book magazines with full length stories, backup stories, one-off gags by a bestselling New Yorker cartoonist, political poetry by a regular Poltico contributor, and prose stories by Grant Morrison, Cienna Madrid and a sundry of talent. And I don’t want it to sound too serious, because these comic book magazines are both fun and funny. It really is a unique reading experience.”

The company will launch in September 2018 with two titles:

AHOY Comics launches with a biting superhero satire written by Tom Peyer (Captain Kid, Hourman), penciled by Jamal Igle (Black, Supergirl), inked by Juan Castro (Transformers),and colored by Andy Troy. On one world, Dragonflyman and his sidekick Stinger enjoy a life of adventure. On another Earth, the Dragonfly hunts criminal parasites like a lethal exterminator. But what happens when these two heroes change places?

“I just want you to know that I’ve loved Tom Peyer’s genius brain for thirty years and THE WRONG EARTH is just pure, undiluted Tom Peyer as it exists in its most natural form. If you love superheroes, you NEED this. If you HATE superheroes, this will change your mind.”―Mark Millar

“I knew this was going to be good when I saw Peyer and Igle on the credits, but now I really want to see how it all plays out.”―Jeff Parker

“THE WRONG EARTH is far more than a one-note gag–Tom and Jamal have made a surprisingly deep exploration and commentary on where this medium has been, how it got to where it is, and where it can go.”―Mark Waid

On sale on September 12, 2018, THE WRONG EARTH debut issue is a full color, 40 page comic book magazine retailing for $3.99, with extras including: 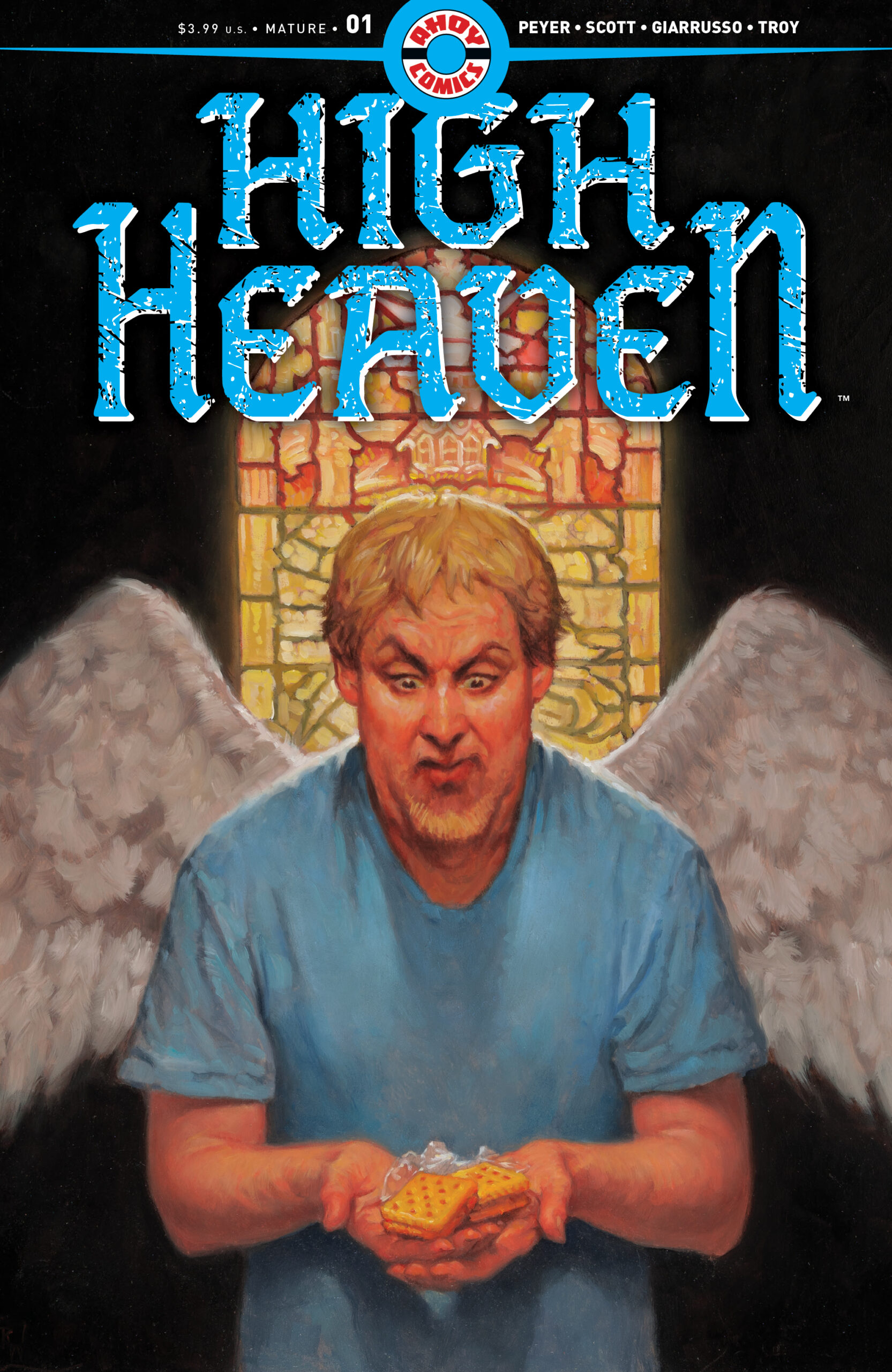 Chronic malcontent David Weathers dies and goes to Heaven—where everything is terrible, and everybody hates a complainer. HIGH HEAVEN is a savage satire by writer Tom Peyer (Hourman, Batman ’66) with art by Greg Scott (Black Hood, X-Files), colored by Andy Troy.

“Delivered with that Tom Peyer panache and his sneaky habit of undercutting reader expectations at every turn. And gorgeous art by Greg Scott, giving it all personality and (seedy) visuals. I’m hooked.”―Kurt Busiek

“HIGH HEAVEN has a great premise. I loved it and can’t wait to see where it goes next. Also: the Hashtag: Danger back-up was a riot. Chris Giarrusso is just the best!”―John Layman

“As gorgeous as it is absurd.”―Alisa Kwitney

On sale, September 26, 2018, HIGH HEAVEN’s debut issue is a full color, 40 page comic book magazine retailing for $3.99, with a cover by Mad Magazine’s Richard Williams and extras including:

In October, AHOY Comics will launch a creator owned title:

“The best books usually transport me into a world with which I am largely unfamiliar and reveal its mysteries to me, whether it’s the mean streets of a great urban metroplex, a small village lying somewhere on a distant steppe in central Asia, or a starship full of individualist cats trying to keep it together long enough to survive…these may very well be the characters that June was born to draw and Stuart was born to write!“ ― Walter Simonson

“This is a great start to a great book by Stuart and June. The Captain and his misbegotten cat crew can count me along for the long haul!” ― Peter Gross

“This comic book is INSANE, in the best possible way when one describes something as “insane”! I can’t say I got too excited when I first heard the concept, “Cats in Space”, but Stuart Moore and June Brigman have got it goin’ on! CAPTAIN GINGER rocks!  It’s solid sci-fi adventure, beautifully illustrated and electric with wonderful diverse characters, who are CATS (?!)! This “puppy” smells like a sleeper hit (but that could just be the space kitty litter)!” ― Mike Allred

On sale, October 17, 2018, CAPTAIN GINGER’s debut issue is a full color, 48 page comic book magazine retailing for $3.99, with extras including:

October will also see the debut of an all star anthology series:

EDGAR ALLAN POE mangles classic tales and brand new stories in this cross between Drunk History and Tales from the Crypt! First, meet AHOY’s own alcohol-damaged version of Poe in The Facts in The Case of M. Valdemar, adapted by Tom Peyer (Batman ‘66) and drawn by Fred Harper. Then: Sugary cereal meets vampirism in Dark Chocolate, by writer Mark Russell (The Flintstones) and artist Peter Snejbjerg (Starman).

“There is no house style at AHOY Comics, but one of the things we aim to do is to bring a sense of humor to the comics,” said AHOY Comics “Dark Ops” Manager and Captain Ginger co-creator Stuart Moore. “We’re publishing stories with a strong personal vision that provoke an occasional laugh. You know, like Preacher. Or, more recently, comics written by Mark Russell, whose sensibilities are a great match for ours. It’s a dark humor, we admit.”

“AHOY Comics offers an abundance of originality and offbeat humor,” said Hart Seely. “Some might say that launching a publishing initiative in this moment is folly. We disagree! We’re publishing comic magazines with high standards. Each issue features beautiful designs, vibrant art, exceptional colors, experienced editors and dynamic stories. We aren’t planning on being an overnight success. We’re not here to exploit IP or make movies. We’re here to publish stories for people who love comics and who love to read.”